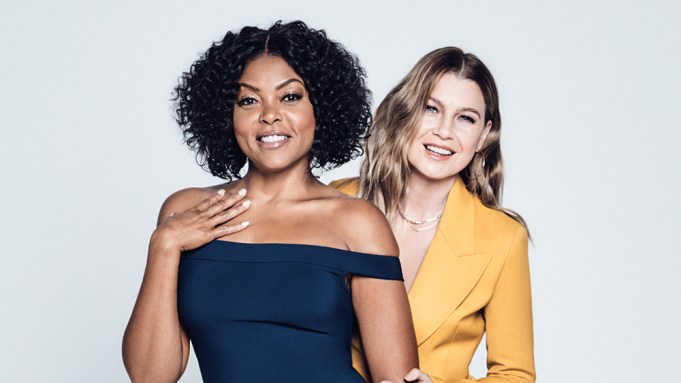 Ellen Pompeo and Taraji P. Henson sat down for a chat for Variety’s Actors on Actors. For more, click here.

Taraji P. Henson and Ellen Pompeo are two of the most powerful women on television, sitting at the center of major broadcast hits. On Fox’s “Empire,” Henson’s Cookie Lyon has proved to be a fan favorite, while Pompeo’s Meredith Grey has kept viewers obsessed with ABC’s “Grey’s Anatomy” for a decade and a half — making the series history’s longest-running medical drama. Both stars, too, have found their voices, speaking out about inclusion and inequity in Hollywood.

TARAJI P. HENSON: Ellen, we’ve been living with your character for 15 years now. How was the character written on the page?

ELLEN POMPEO: When I read the script, the thing that stood out was that it was the lead character. I had been in a bunch of movies, but just the girlfriend or the wife. And then — listen, the nature of how she’s evolved is that I’m 15 years older. What about you when you read the pilot for “Empire”?

TpH: I thought, “The NAACP, they’re going to get me for this one.” She calls one son, who’s gay, the F-bomb, and she beats one son with a broom. This is something that has never been shown on national television — certainly not by a black woman. When you’re a person of color, you have to be careful about the roles you pick. You want to uplift the people. Once I got past the fear, I was able to really see her. I didn’t want just black people to identify with her. I wanted every mother in the world to understand the sacrifices that only mothers can make.

EP: I think that Caucasian actresses don’t understand the nuanced struggles that you have as a black woman, and the roles you choose — what you’re sidestepping, what you want to make sure gets out there. It’s a whole different layer of difficulty that I certainly didn’t understand when I started my show. I knew that we were doing special things by showing people of color as doctors, which hadn’t been done on television in a long time. But when we’re young actresses you’re trying to get any role you can. You don’t have time to have empathy. I’ve had a tremendous education, not always in the most pleasant of ways. I’ve had to observe and have a lot of uncomfortable moments, which is fine, because I’m happy to have uncomfortable moments as long as I’ve learned.

TpH: That means you’re growing. Growth is uncomfortable. When I booked “Empire,” I had a momentum going that I’d been waiting my entire career for. I seized every opportunity. If I was getting 5 or 10 million a movie, I wouldn’t work so much. I’m working because I have bills to pay. I have dreams. I have to get it in.

EP: For me the performance that stands out is “Hustle & Flow.” Your quote should have shot up after that.

TpH: It did not. I think the industry knew I was talented. But it’s about money. Are you bankable? I had to continuously prove that. I’ve been trying to prove and improve. I was asking for half a million. I didn’t get paid that until I did my first Tyler Perry film. He was the first person who paid me $500,000. I was never in a position where I could not take a job; by the grace of God, they have all been really good characters. But it was never a situation where I was like, “I’m not going to do that.” Now, I’m finally there.

EP: It’s impossible to have this conversation without talking about race. It’s such a significant piece of pay parity.

TpH: It’s not going to change until privilege reaches across the table and helps. Otherwise, we’re playing a rerun. The only narrative that I wish I could change is my money. It’s almost like they want this incredible performance for a discount price. The black movies — we don’t get big budgets. I have to wait until Scorsese or someone with a franchise film calls.

EP: You hear that? She wants a franchise movie. Who’s calling?

TpH: We’re going into our sixth season. How did you do 15? Was there any moment where you were like, “Child, I want off this bus”?

EP: There were many moments. It’s funny: I never wanted off the bus in the year that I could get off. The first 10 years we had serious culture issues, very bad behavior, really toxic work environment. But once I started having kids, it became no longer about me. I need to provide for my family.

TpH: I know that.

EP: At 40 years old, where am I ever going to get this kind of money? I need to take care of my kids. But after Season 10, we had some big shifts in front of the camera, behind the camera. It became my goal to have an experience there that I could be happy and proud about, because we had so much turmoil for 10 years. My mission became, this can’t be fantastic to the public and a disaster behind the scenes. Shonda Rhimes and I decided to rewrite the ending of this story. That’s what’s kept me. Patrick Dempsey left the show in Season 11, and the studio and network believed the show could not go on without the male lead. So I had a mission to prove that it could. I was on a double mission.

TpH: Were you and Patrick getting paid the same in the beginning?

EP: He was being paid almost double what I was in the beginning. He had a television quote. I had never done TV.

TpH: I know that story. Is there wine in this cup?

EP: “He’s done 13 pilots.” Well, none of them have gone. I didn’t even realize until we were renegotiating Season 3. No one was offering that up.

TpH: That story sounds about like mine. But when all the tweets were about Cookie, I said, “It’s time to renegotiate. Can everybody sit down at the table, please?” I’d been in the game long enough to know the numbers game, and I knew Cookie had become iconic. You need her. So I need my money.

EP: My husband says, “Closed mouths don’t get fed.” But if you have to walk, don’t be a victim. If you don’t get what you want, put your big-girl panties on …

EP: You can know your worth, but if they don’t know it, you can’t cry.

TpH: I had to leave a show before, and it was the most money I’d ever seen in my life, and I was so miserable. It was stealing my joy. I just remember praying to God: “God, I’m not happy creatively.” And the next day, I called the producer. He got it. And I walked away, not even knowing where I was going. I ended up doing a play in Pasadena. I didn’t care about who was coming to the theater, executives or casting directors. It was about Taraji falling back in love with this craft. Fox had to woo me. I wouldn’t read the script. I was done with television.

TpH: It’s really not for me. I had to say, “I want my money because I know what I bring to the table and I know the following that I have.” I know if there’s money to be had, I should be paid.

EP: I now have three kids. And we turned the culture around. I’ve hit some marks that have made me feel accomplished in a different way. Shonda Rhimes has been amazing. She lets us be mothers. I don’t have to travel. I don’t have to go anywhere.

EP: Are you involved in your storyline at all?

TpH: Absolutely. No one knows Cookie better than me.

EP: I haven’t been challenged creatively at all. Every once in a while we do an amazing storyline. But for the last five years, I’ve had other milestones that we were trying to achieve behind the camera.

TpH: For me, one of our proudest moments was with gay marriage. Because we didn’t know how the black community would accept Jamal, the gay son [played by Jussie Smollett, who since this conversation has not been asked back to the sixth and final season of the show], because it’s so taboo. There’s still the homophobes on Twitter, but those are small voices compared to the resounding voices of love that he gets, the character. I’m just proud to be a part of this show that’s not afraid to get people talking. That’s the only way you’re going to get change.

EP: We have the most incredible community of actresses right now. Everybody is just pushing and taking all these old stereotypes and throwing them out the window.

TpH: I don’t want anyone that looks like me, or any woman at 40, to feel they have to stop being sexy on-screen. I’m not ready to just collect a check. I want to open films. I’ll be 49 this year.

TpH: And we still have an audience.

EP: We still have an audience.