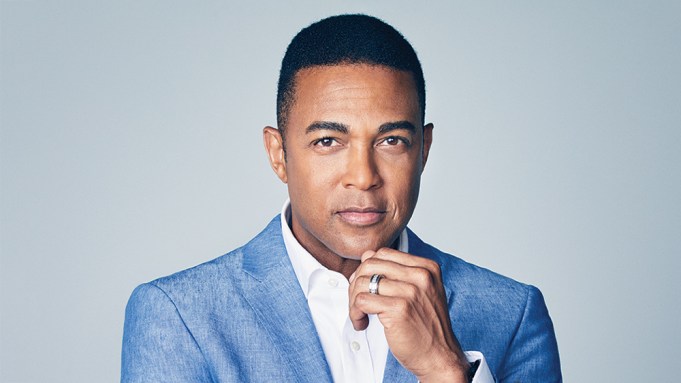 Lemon, a CNN anchor on the air nightly at ten, would seem from some angles like someone who should be celebrating. For one thing, he’s engaged: His boyfriend, Tim Malone, proposed this spring, and Lemon’s massive ring, with embedded diamonds around its perimeter, punctuates his gestures as political chat gets animated. Another reason to celebrate: That style of talk has brought Lemon, a familiar presence on CNN for years, recent and fast-burning stardom. Lemon would be the first to tell you that he’s seen as among the leading press antagonists of the President: “If you said, name ten people who have been critical of the administration,” he says, “and I don’t mean biased, I just mean critical, I’m sure my name would come up.” That comes with the sort of attention broadcast journalists seek throughout their careers — including the notice of the President.

Which, these days, is exhausting; Lemon, whom the President has called “the dumbest man in television,” suffers through delivering the news to an increasingly hostile audience. “I can’t even go to a bar or restaurant without someone saying, ‘Oh! Fake news,’” Lemon says. “Or someone calling me a black f—-t in the park.” Such incidents, Lemon says, used to happen rarely; now they’ve become commonplace. He’s backed away from sharing personal photos on Instagram, he says, and is careful meeting new people in the event they mischaracterize their encounter to paint Lemon as an aggressor, advice he says he received from the NYPD. “People in my position may end up when this administration is, by the time it wraps up, having news PTSD,” he says. “One doesn’t have to be in a war zone to have post-traumatic stress from this particular administration.”

Criticism and bigoted rhetoric find their way to the anchor in part because he is so open. “I put everything out there. I’m the same person on TV as I am off. And it’s tough, because I will say and do things years before other people do it.” Lemon came out in 2011 (notably, a year before colleague Anderson Cooper); he also spoke at that time about the trauma of having been molested as a child. “They were like, ‘Well, why does he have to share that? TMI.’ Now it’s like, ‘this is great, black people should talk about molestation.’

“I realize that sometimes timing is important,” he adds. “But when you’re on the forefront, you get beat up a little. But you also make room for other people to do it.”

Similarly, Lemon has created space for cable-news colleagues to go after the president directly. Hosting a panel-heavy two hours that he calls “a talk show about the news” rather than the news itself, Lemon is unbound from whatever proprieties remain in TV news. “We can say some naughty things and do some naughty things and push the envelope and even break some barriers,” Lemon says. To wit: He began an episode of his show in 2018 by calling the president “racist,” and late last year declared “the biggest terror threat in this country is white men” but that “there is no travel ban on them.”

He owns his crystalline opinions of the Trump administration, batting back the idea that anchors are obliged to show a sort of “objectivity” even in chaotic times. “I don’t like being the story, as the journalist, but in this day and age what are you going to do? As far as being biased, there’s nothing biased about having rights under the Constitution. I don’t think that’s bias. I think that’s just being a true American. That’s actually being a patriot.” Those who disagree are eager to let him know — and observe him with a level of closeness other anchors, perhaps less outspoken but every bit as prominent, do not face. “I’m never one to talk about race,” he says. “I keep it pushing because I am grateful to be in this position. But I was talking to my fiancé, and he said, ‘Do you think that your colleagues have that much stress? Or are attacked that much?’ And I said, ‘I know they’re not.’ I didn’t want it to be a reality for a while, but I’m just being honest. A lot of criticism of me is rooted in homophobia as well.”

Lemon is not the only gay person in prime-time news: He shares CNN’s air with Anderson Cooper, and on MSNBC, there’s Rachel Maddow. “When I came out, the first person who sent me flowers was Rachel. And recently, Anderson and I talk about these things — before I was in prime time, I didn’t know him that well,” Lemon says. “I know that they’re supportive and I know they understand, sort of, what I’m going through, but going through it as a person of color is a different animal.”

Which makes Lemon, you know, weary. “I’m a unicorn. I’m black and gay; it’s like, wow. I check all the boxes. I call out this administration — that’s a lot of boxes to check. It’s a lot of pressure, because no one asks even Anderson to be the representative for all white people.” But it also uniquely situates him as someone doubly emboldened to speak out. Lemon is gearing up for the 2020 elections and has moderated several CNN town halls; he’s been struck by the rise of Pete Buttigieg. “I thought if I ever was in a relationship it’d be with my ‘partner’ or my ‘roommate,’ right?,” he says. “Or I’d be a ‘confirmed bachelor.’ And I also thought that this country would shun a gay person running for president and it is nice and refreshing to see a person being taken seriously now, doing so well at not necessarily running but just answering the questions in a way that is just —” He kisses his fingers in the gesture symbolizing “perfection,” his ring gleaming in the light.

And to have something else to look forward to. 2020 isn’t just an election year; it’s also the year Lemon will get married. (He and Malone are deciding between New Orleans and the Hamptons.) He calls the attention, often negative, to his personal life “a little unnerving” — “I want to save him from that and protect him from that and protect his family and my family from that, but I can’t” — but sees a higher purpose, too. “I do like that some little kid sitting in some part of the country who thinks that they’re bad or created wrong or going against what God or society deems appropriate, that they can look at me and say, the news guy is doing it. The news guy is getting married. The news guy is going to have a reception; someone got down on one knee and asked him to marry. I can do it too. That is the most important part of it.” He fiddles with the glimmering band on his finger. “I never thought in a million years, little old ladies coming from church would walk up to me, like, congratulations, let me see your ring.” Being a unicorn, even if wearying, can have its benefits.