‘It’s an Explosion’: Inside the Rising Costs of Making a Scripted TV Series 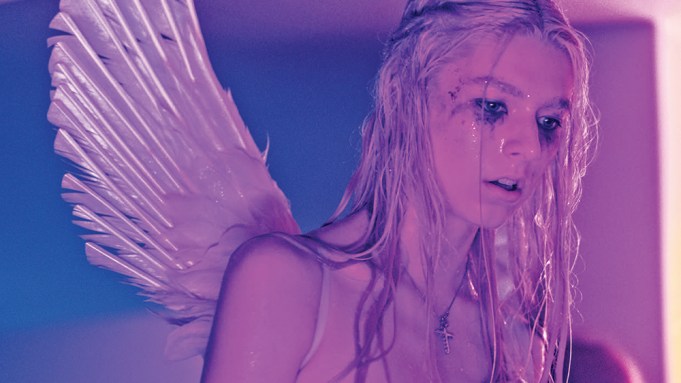 When Apple TV plus launches on Nov. 1, it will do so with what’s arguably the most expensive new-series lineup in TV history. Among the streamer’s initial offerings are the drama “The Morning Show,” bearing a price tag believed to be more than $15 million an episode, and the dystopian sci-fi series “See,” which is rumored to have cost as much as $17 million an hour.

Apple is looking to make a splash as it gets into the original series business, and these shows feature A-list stars — Reese Witherspoon, Jennifer Aniston and Steve Carell on “Morning Show,” and Jason Momoa on “See” — with spare-no-expense production values.

But it’s not just Apple maxing out credit cards as it enters the competitive subscription TV arena. Also coming soon to a small screen near you: Disney Plus’ “Star Wars” spinoff series “The Mandalorian,” which premieres Nov. 12 (when the service launches) and cost at least $15 million an episode.

Not to be outdone, TV’s O.G. streamers have plenty of high-ticket items in their queue. That includes Netflix’s new drama “The Politician,” which executive producer Ryan Murphy recently bragged was one of its costliest shows ever, and Amazon’s long-gestating “Lord of the Rings” project — which is expected to be the most expensive series of all time once it gets underway, on top of the $250 million that the Tolkien estate charged just for the intellectual property.

“At a time when there are 31,600 TV shows on, it’s really hard to break out, and I think it starts there,” says A+E Studios head Barry Jossen. “More than ever, all these buyers and services are attempting to program for their audience; they’re trying to get attention, get eyeballs and differentiate whatever they have from what everybody else has.”

Peak TV, meet Posh TV:  With services like Apple TV Plus, Disney Plus, HBO Max and Peacock coming online over the next several months, even notoriously spendthrift conglomerates are opening their pocketbooks wider than ever. And that budget creep is spilling over to traditional programmers, which are paying to keep up with the Pluses.

“I think more and more today, as the prices are rising, you hear the term ‘unsustainable,’” says veteran TV exec and producer Warren Littlefield (“The Handmaid’s Tale,” “Fargo”). “I guess different services, different platforms will determine what’s acceptable for them. … The $10 million-an-episode budget used to be an extraordinary number. While that’s a lot of money, it’s just not considered extraordinary anymore.”

Not only are the size, scope and ambition of programmers increasing, but it’s also a seller’s market, which is driving up costs. Then, with success, year-over-year increases are being fueled by outsize episodic-fee bumps for above-the-line players.

Rising budgets (“I wouldn’t call it a creep — it’s an explosion,” says one studio exec) have been a noticeable byproduct of this so-called new golden age of TV, as A-list stars and filmmakers migrate to the small screen and outlets aim to drive subscriptions by offering top-notch, award-winning fare.

“We expect the quality of movies now,” says “Chernobyl” executive producer Jane Featherstone. “Everything is being inflated at the moment.”

Factors leading to budget bumps include stars like Aniston and Witherspoon, who are both making at least $1.25 million an episode for “The Morning Show.”

“What you’re looking at is a world where Apple said, ‘We want to jump into the fray,’” says a producer. “They made a lot of commitments, and it seemed like money was no object. That changes the entire financial structure, because you’ve got a player who has gone in excess of a million dollars an episode for talent. So it affects deals everywhere. It becomes a new high. Everyone is then playing against that.”

Says “Game of Thrones” executive producer Carolyn Strauss: “It’s not like there are limitless pools of talent. It’s being able to support the projects with the talent and I think that’s really the pickle.”

Top-tier producers are landing huge deals at both the streamers and the traditional TV studios and being promised unlimited budgets. And those producer pacts are also eventually charged back to their productions, adding to episodic costs. Producers at that level demand — and get — big-name stars on camera and first-rate artisans behind the lens. Last week, Netflix content head Ted Sarandos confirmed increased competition from new streamers had expanded the cost of “elite” series: “On a very competitive show, there probably has been 30% price escalation since last year,” he said as the company released its quarterly earnings.

The production crunch — at least 500 original scripted series this year, according to FX boss John Landgraf’s count — means an expensive race to secure marquee talent. Everyone from production designers and costumers to directors of photography and stunt coordinators has plenty of job choices right now, and so all of their rates have gone up exponentially. If you’re looking for elite, established, award-winning department heads, you’re going to pay for that.

Episodic costs also balloon as production days expand. Not too long ago, the average shoot for an hourlong drama episode lasted eight days; now it’s 10 or more. Talent also frequently demands shows shoot locally (such as “The Morning Show,” which filmed in Los Angeles despite being set in New York), which can cost more, given California’s less generous tax credits. Studio spaces are so booked up that there often are several productions bidding to shoot on a rare open stage. There’s the complexity of both practical and visual effects, as well as finding perfect locations. Producers may also have to build their schedules around their stars’ schedules, which often include other shows and films.

“There are the attendant things that go with them like trainers, hairstylists, stand-ins, the way that they have to travel — all of it,” one exec says.  “And then you get a second lead who’s also a big name who hears what your first lead is making, and their fees go up as well. It’s all down the line. It’s an ugly case of dominos at a level that’s not sustainable.”

In a recent New York Times profile of Murphy and “The Politician,” the über-producer couldn’t resist bragging about how his first streaming series cost more than Netflix’s expensive period piece “The Crown,” and that his next two series for the service would boast even steeper price tags.

“I’m trying to do things that are big and commercial, fun and shiny,” he told the publication — and he’s far from the only one taking advantage of TV’s inflated budgets.

At launch, “The Crown” was budgeted at $13 million per episode, with some of that cost earmarked for elaborate costumes, location shoots and the show’s other attentions to detail. “The Politician” is set in more modern times but features top talent (Gwyneth Paltrow, Jessica Lange and Ben Platt) and also leans into a hefty wardrobe and location budget.

“I’ve got the biggest boat! It’s the most perfect, wonderful boat ever made,” quipped “Sharp Objects” executive producer Marti Noxon on Twitter in reference to Murphy’s quote. Noxon, who cut her teeth on scrappy broadcast shows like “Buffy the Vampire Slayer,” tells Variety it took some time to get used to premium-level TV budgets.

“I came up on a vampire show where we were constantly sticking them back together with tape and gum,” she says. “‘Sharp Objects’ was a total learning experience. I didn’t realize until I was there for a while that they were making a giant movie. And there was more flexibility in the budget. It wasn’t absolute, but we were making something at a different quality level in terms of what we could afford to buy. The writing still had to be incredible, the acting still had to be incredible, but in terms of the visuals, I kept being like, ‘Really? We can have that?’”

Some shows’ budgets make more sense than others’ on paper, given their scope and importance to their network. In success, HBO’s “Game of Thrones” grew into such a monster-sized hit (around $16 million an episode) that the show’s final two episodes were said to have taken at least 105 days to shoot, at a cost in the high eight figures. “‘Game of Thrones’ changed the game,” says one producer. And just as HBO’s “Band of Brothers” and “The Pacific” were two of the most expensive limited series of their era, the third installment of Steven Spielberg and Tom Hanks’ World War II trilogy, “Masters of the Air,” could cost Apple TV Plus as much as $20 million an episode, per insiders.

But it’s not just special effects-laden period pieces shot in exotic locations that are hastening price increases. Even contemporary dramas with lesser-known stars aren’t always cheap: HBO’s “Euphoria” is said to have cost around $11 million per episode, for example. In that case, HBO identified a need for a younger-skewing, buzzy drama and aggressively went after it — at a time when parent WarnerMedia has infused the pay cable giant with more money and a mandate to grow.

Not only are audiences benefiting from the surge in high-end series, but Jossen says the industry could ultimately reap rewards from the current TV bubble via “a new and emerging talent pool of really experienced artisans, craftspeople and technicians in the art of television filmmaking. We’re upping everybody’s game.”

Big budgets don’t necessarily translate to buzz or popularity, however — witness the disappointing lack of interest in Baz Luhrmann’s Netflix series “The Get Down,” which cost around $11 million an episode but failed to enter the zeitgeist.

“Veep” executive producer David Mandel, who says his HBO comedy boasted a fine budget, nonetheless wonders whether productions need this much money. “Some of these numbers you hear, they’re crazy,” he says. “When you saw a James Cameron movie and a Harrier jet blew up a bridge, you went, ‘OK, it’s good that thing cost $100 million.’ But when it’s three people in a room, what are you spending the money on? Just because they’ll let you spend it doesn’t mean you should.”

To be fair, many outlets are balancing their big-budget bets with more economical entries. Netflix may have “The Politician” and “The Crown,” but it also has low-cost international dramas. Hulu’s “Pen15” was one of last year’s most critically acclaimed sitcoms, and it was produced on a modest budget. And many believe once the new streamers establish themselves, they too will start to practice more fiscal responsibility. Adjustments are coming, particularly as every outlet now has a different business model — and not all will feel the need to keep going at this pace.

“I think probably Apple is still in that first phase where they’re proof of concept and they throw as much money at it as possible, and then eventually they’ll be like, ‘OK, where can we trim?’” Noxon says.

Strauss notes that her next project at HBO is a “tiny little pilot” that’s a sliver of the cost of other series out there.

“It’s hard. You have to make a lot of compromises, but sometimes not having all the money in the world forces you to make choices that are interesting and creative,” she says. “Big names, big deals, it all needs to pay off in the end. We’ll see if we’re all living in some giant Ponzi scheme!”