Billy Porter and Rachel Brosnahan on Why Representation Matters on TV 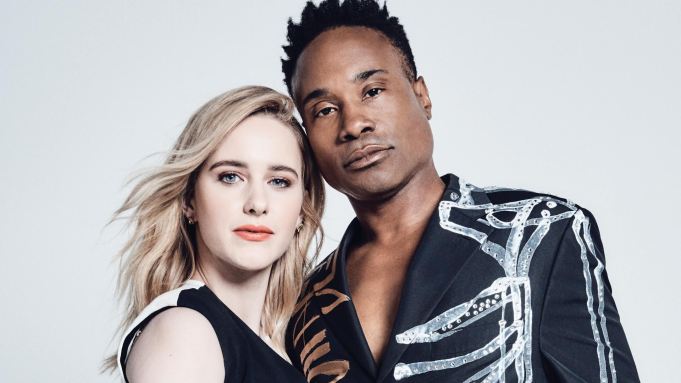 Billy Porter and Rachel Brosnahan sat down for a chat for Variety’s Actors on Actors. For more, click here.

Billy Porter and Rachel Brosnahan have both brought outsider characters to the center of the Emmy conversation. On FX’s “Pose,” Porter plays Pray Tell, a gay
man with AIDS who acts as a mentor to a community of transgender women in New York City’s raucous drag ball scene. In the second season of Amazon’s “The Marvelous Mrs. Maisel,” last year’s Emmy winner Rachel Brosnahan sees her character’s commitment to stand-up comedy deepen.

Billy Porter: It’s so exciting to just be in your presence — this new generation of whatever it is that we’re doing. We both have shows where New York City is a character. Mine in the ’80s. Yours is in the late ’50s?

Rachel Brosnahan: We started in 1958. New York has changed a ton since the 1950s. For one, people don’t dress like that anymore.

BP: Oh, my God, those gloves. The clothes on your show, the styling.

RB: Costume fittings are one of my favorite parts. But shooting in New York has been incredible. It feels like you’re time-traveling.

BP: We have to change the cars.

RB: When we start shooting outside, no one cares what we’re shooting. They all want to take pictures with the vintage cars. It can feel like we went into a time machine. But you lived in New York in the ’80s?

RB: How do you feel it’s changed?

BP: 42nd Street has become Disneyland. Obviously it’s better, but I sometimes miss the grit. I came out as gay in ’85. It was the middle of the AIDS crisis. I started coming to New York in 1987, from Pittsburgh. And did my first Broadway show, “Miss Saigon,” in ’91. It was a dark, dark time. We were living through a plague. And it was a group of people that nobody cared about. But the great part about it was — and I think this is what infuses the show — choosing life anyway is such a powerful thing. You can’t have a testimony unless you have a test.

RB: You’re working with so many actors for whom this is a breakout role. Do you feel like an authority on set?

BP: It’s special to be in a position where I can be the daddy. I was always the youngest, and you will learn one day that changes. You wake up and you’re not the youngest anymore. I enjoy it because I have lived and I do have something to say.

I want to talk with you about the rhythms of both of our shows. There’s a musical component.

BP: The spitfire rhythm of the text — for me watching it, it gets me right into it.

RB: That’s Amy Sherman-Palladino and Dan Palladino. That is their thing. The reason that everyone talks so fast is because they think that that’s how people talk in real life. We often play music on set. In the pilot, one of the first shots is of Midge walking through Riverside Park. And, much like a musical, to get everyone on the same rhythm, they would play the music. They’d do playback, and we’d all march through Riverside Park together.

BP: There’s something very “Guys and Dolls,” Runyonland, about that. It sets you up with that heightened thing of everybody walking at the same time and the bags and the hats.

RB: And Amy hires almost exclusively dancers as background actors in scenes like that. So in the B. Altman scenes, all of those background actors are dancers. That’s Amy’s aesthetic, and she’s unapologetic about it. Amy has such a specific voice that she has crafted. So does Ryan Murphy. How did you guys meet?

BP: My Ryan Murphy story is about the law of attraction. I have not had a whole lot of luck in my career with film and television. I’m having this moment now. And after “Kinky Boots” and after the Tony and the Grammy, I thought, this will be my moment. It didn’t connect that way, and I started looking at the landscape of producers. I thought, who’s going to get me? I’m big, I’m splashy, I’m really gay — who’s going to get me? And I saw it was Ryan.

RB: You thought that before you guys ever met?!

BP: Years before. Speaking his name into the universe.

BP: Around 2013, ’14. It became clear that I needed to get specific with my dream. So I started writing his name in my journal and speaking his name in conversations and out into the universe.

RB: I love that so much.

RB: I’ve been there.

BP: Just dismissed. Too flamboyant. The night before I got the call for “Pose,” I literally had a nervous breakdown with my sister on the phone — I’m done, I can’t do it anymore. And then the next day, I get the phone call for “Pose.”

BP: We’re dealing with this whole group of disenfranchised people. The world has not heard their story before. It is breathtaking.

And I’m a part of the LGBTQ community. I’ve been surrounded by these ladies and these men and didn’t understand the magnitude. Here I am on set, and for the first time I’m going, the “T” in LGBTQ has largely been ignored. By me. Not because I wanted to ignore it. You know, we came out. We went to the front lines to fight for our lives, and then the pill came, everybody got healthy, and everybody moved on. These women and these men teach me what real authenticity is about.

RB: Even in watching the first season, how much these actresses have grown is extraordinary.

BP: It’s such a gift. I have the same interesting connection to your show. Never in a million years did I ever think that we would have a black president before we had a white woman. I had no idea about the woman thing, the depth of it. Your show reveals what women have had to endure.

RB: As someone who’s never done comedy, I drastically underestimated how much comedy has the power to move people. I have been so moved hearing from our audiences what they learned from the show, the different ways in which it makes different women feel powerful. The theme is so universal, this idea of a woman finding her voice in a brand-new way. Because she always had one.

BP: She always had a loud one.

RB: I think something that we don’t share is that unflappable confidence. I’ve never been so terrified as when I’m standing onstage to perform comedy. And it’s been a process of reaching deep and learning to feel powerful using my voice. And that’s something that we’re all collectively learning at this moment in time — so it feels as relevant as ever. In terms of finding your voice, is there something that you haven’t done yet that you’re dying to do?

I always say it’s easy to be who you are when what you are is what’s popular. When I entered this business, it was not popular to be black, gay, out. I took every hit that came with that. People were telling me that my authenticity was my liability. You’re too much of a sissy. My masculinity was always in question. But the service is inside of my authenticity, choosing my authenticity over my fame.
Billy Porter

BP: What’s been significant is that I’ve been able to do it on my own terms. I always say it’s easy to be who you are when what you are is what’s popular. When I entered this business, it was not popular to be black, gay, out. I took every hit that came with that. People were telling me that my authenticity was my liability. You’re too much of a sissy. My masculinity was always in question. But the service is inside of my authenticity, choosing my authenticity over my fame. Choosing myself over whatever this show-business thing could possibly be. That is the gift of this moment for me right now. It was not easy. I’m going to be 50 this year. I’ve been in this business for 30 years.

RB: Has there been a moment from a fan that has stuck with you?

BP: I’m so moved by all of the people but particularly the little black sissy boys. The little black queens. The ones who are told that their existence on the planet is unworthy. You know, the little trans kid, the little ones. Representation does matter. To have somebody to see and go, if I can just get through the quagmire and get to the other side, I’m going to be all right. I’m going to be able to find my tribe, because it exists.

RB: In addition to all the other titles that you claim, you are formally and forever a fashion icon.

BP: I’ve always been a fashion person. I know that there is activism inside of fashion. I knew that the tuxedo gown at the Oscars would create a conversation surrounding what gender means. When women wear pants, it’s powerful. When men wear a dress, it’s disgusting. We’re not doing that anymore. That dress changed the world.

RB: And on a superficial level, I still have not come up off the floor. It was unbelievable.