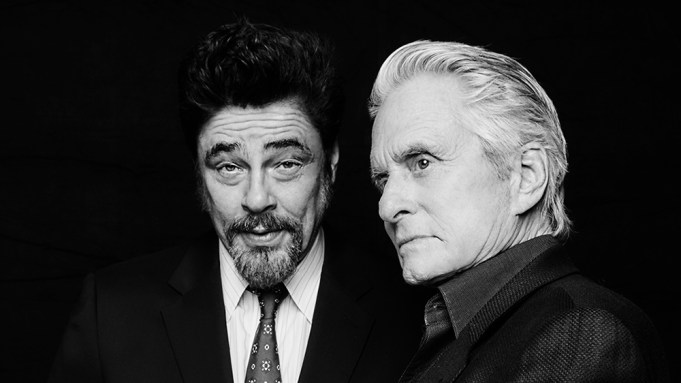 Benicio Del Toro and Michael Douglas sat down for a chat for Variety’s Actors on Actors. For more, click here.

Michael Douglas made a return to television with Netflix’s “The Kominsky Method” — a comedy about aging in Hollywood that’s his first series-regular work since ’70s drama “The Streets of San Francisco.” His fellow acting veteran Benicio Del Toro (Douglas’ co-star in the 2000 crime drama “Traffic” and in the Marvel universe) made his limited-series debut as prisoner Richard Matt in Showtime’s true-crime saga “Escape at Dannemora.”

MICHAEL DOUGLAS: So, that was a real guy, although he had died before you did “Escape at Dannemora.” Did you do homework about the character beforehand?

BENICIO DEL TORO: Well, yes. There were transcripts of all the testimonies of the other two characters that survived the escape. So I just read that. Ben Stiller, the director, was really keen on me playing this part, and he gave me the first episode. And I just thought it was very clever the way they were setting up this character.

MD: You shot this thing in the prison. Were any of the extras actually prisoners?

BdT: I don’t think that the extras were serving time.

MD: I’m a big fan. I’m always interested in you, because you remind me of both Jack Nicholson and Sean Penn, where you’re able to bring an audience in with your own sense of pacing and time. Do you think about what the pace of a scene is going to be?

BdT: Every time I act, I always feel like I’m rushing. And I’ve had a few directors say to me, “Take your time.” So now when I work, I keep hearing the echo of these directors. And maybe even from acting class.

MD: You study with Stella Adler’s?

BdT: Yes, I did. There was a teacher there named Arthur Mendoza.

“Let me tell you something: You don’t lie. And if you do, I don’t get the lie.”
Benicio del Toro

BdT: What I got from the acting class — which, by the way, in “The Kominsky Method,” I love you as an acting teacher — was that it was really serious. Acting is like studying to be a doctor.

MD: I had someone early on tell me, “The camera can always tell when you’re lying.” So I had this whole period where I was just so tough on myself.

BDT: Let me tell you something, you don’t lie. And if you do, I don’t get the lie.

MD: One day, I was getting ready for “Fatal Attraction.” I said, “I could be a lawyer; I went to school. I could maybe have had an adulterous relationship. Not saying I did, but maybe I could have.” And then all of a sudden, I said: “No, no. Acting is all about lying. Just making people believe.”

BDT: But there’s the truth. When I watch you, I get the feeling that you’re really there, and that’s so hard to do. You’ve done it consistently for decades. Four?

MD: Five. We got to know each other on “Traffic.” Although people forget that neither of us were in the same movie. It was three different stories.

BDT: There were a couple scenes that never made it into the movie. I remember we were shooting downtown, and I drove to Westwood, where I was living. As I got there, the phone rang. It was Steven Soderbergh, the director. “Where are you?! We have the scene with Michael!” It was my first scene with you, and I was dying.

On my way back, I hit traffic for real. I’m killing myself. I walked in, and you were smiling. And we did the scene; it was like cheesecake — we went right through it. You understood that I was bashing myself all the way from Westwood. Thank you, because it really showed you understood the human condition.

MD: I think producing helped me see the big picture. And part of the big picture is, my response is to try to make every other actor as comfortable as he possibly can be. You only do your best work when you’re relaxed. And I only want to be in movies with good actors and good people.

BDT: I learned from you, and I try to be as kind, especially with newcomers.

MD: Soderbergh is a very unique director in the fact that he’s also the cameraman, and you probably only have one shot at it. He’s the opposite of almost everybody. He’s not afraid to do one take —

MD: You won an Oscar for that performance, and it was unbelievable.

MD: What do you see, in terms of when you first came in, how the business has changed?

BDT: I think there’s more opportunities now for actors. TV is equally in-depth, in quality, as movies. Netflix or Showtime or HBO, they just do great work.

“You remind me of both Jack Nicholson and Sean Penn, where you’re able to bring an audience in with your own sense of pacing and time.”
Michael Douglas

MD: On the little indie features films, you are the marketing budget. You don’t get paid much of anything; you’re working your ass off. And then when you finish, they go: Promote the picture. I had two or three of these little pictures — “Solitary Man,” “King of California” — that didn’t do much. They would run for a week and go right to video. I was sort of like, “Screw this, man!” And I did this Liberace TV show, “Behind the Candelabra,”
for HBO.

BDT: It was showing in Cannes as a movie.

MD: It was a movie, because it was in the movie theaters. It was shown theatrically around the world. So I don’t want to say nothing, but
Steven Spielberg was the president of the Cannes Film Festival [jury] that year. And the word was, I was the favorite for the best actor award. He put the kibosh on that, because it was an HBO film. So when I now see this argument and beef about Showtime or Netflix, in this case, doing feature films, I think they’ve got to get this resolved.

BDT: Did you ever think you were going back to TV before you did “The Kominsky Method”?

MD: No, I really didn’t. Chuck Lorre, who’s a big television writer, sent me a script, and the writing was so good. For me, you get to a certain point in your life and you say, “What have I not done?” And there were two things. One was comedy. I’ve had a couple over the years — “Romancing the Stone,” “War of the Roses,” “Wonder Boys” — but I wouldn’t say people thought of me as a comedian. I wanted to learn comic timing on delivery.

MD: These guys like Alan Arkin are so good. And the other area, of course, which we both share is the Marvel world. I’d never done a green screen. I used to think it was a joke, all this pretending. You got to act your ass off, man. There’s nothing there.

BDT: It brings you back to theater in a way. You have to pretend there’s something there. You got to sell it.

MD: Let’s find something we can do together. We could be two funny hit men.