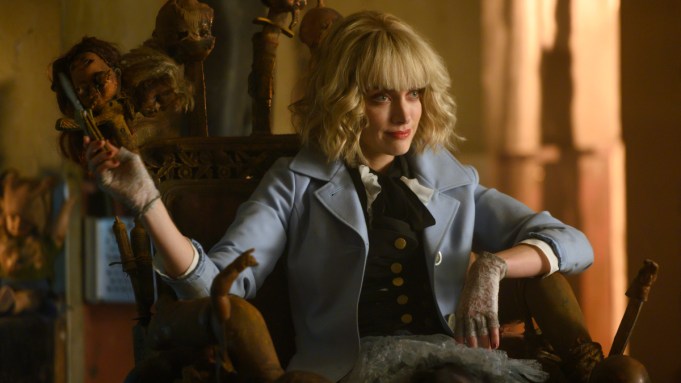 SPOILER ALERT: Do not read if you have not yet watched the series premiere of “Batwoman.”

It only took one episode for the CW’s latest DC adaptation, “Batwoman,” to reveal the hidden identity behind its big bad — not only to the audience but to the titular heroine herself. The menacing Alice (Rachel Skarsten) came face-to-face with Kate Kane (Ruby Rose) by the end of the series premiere episode, revealing that she was actually Beth, Kate’s long-lost (and presumed dead) twin sister.

“As the actor who’s playing Alice, it’s wonderful because the audience more deeply understands the motivation behind everything that she’s doing. And it gives them the opportunity — and the opportunity for me playing Alice — to get them to root for her, which I think makes a very interesting villain,” Skarsten tells Variety.

Of course, for comic book readers — or anyone curious enough about the new show to Google the characters’ names and relationships to each other — the reveal was not a surprise. Skarsten admits the show has a “delicate balance” to walk when it comes to assuming how much about the world the audience might know independent of the episodes, and she notes that if someone just came into the first episode fresh, “it’s this amazing cliffhanger that you’re giving up right away.”

Skarsten shares that when she initially auditioned for the role, the names on her audition sides were changed, so she didn’t really know who she would be playing, should she get cast. But, as she was moved further along in the process of casting, producers did let her in on the secret so she could adequately prepare to layer her performance choices.

“I always say as an actor I want to know enough about my character — the bigger picture of my character — because of course that informs my decisions in the moment. But I also like to not know some things — because we don’t know everything about the story of our lives as [it] unfolds,” she says. “I tried to play it as subtly as possible until the reveal, but obviously wanting to do it enough where, if you were looking back on it, you’d say, ‘Oh, there it is!’

Skarsten considers Alice to be “an incredibly talented but also intelligent individual” who is “very aware of everything she’s doing” in her antagonism of Gotham. But, she admits that the trauma of her past may be affecting her more than she realizes, let alone is willing to acknowledge.

“She oscillates back and forth between, I think, two really distinct personas and personalities and they change so quickly, I’ve sort of approached it that she’s quite calculated in all that she does,” she explains. “But I do think that in moments of vulnerability, there’s the child Alice that comes out, and I don’t necessarily know that she knows what is going on in those moments.”

Although Skarsten says she very much wants the audience to decide for themselves how they feel about Alice, she admits that she does think Alice “knows the difference between right and wrong” and just “feels a great justification in what she’s doing.”

Going forward in the season, Skarsten says she hopes Alice’s true identity will become known to her father Jacob (Dougray Scott) sooner rather than later because “it’s less fun for her to play with Jacob when he doesn’t have the emotional investment in her. My father always used to say, ‘If someone has a hook in you, you have a hook in them.’ And that’s what makes it so explosive. So I think when Jacob looks at her just as a maniacal villain, he’s dealing with that in one way, but when it’s his daughter, how much more complex does that become for him?”

And in having continued, emotionally fraught interactions with her family members, it may test Alice’s villainy, as well as her humanity.

“Most people don’t just wake up and they’re evil villains; there were hurts and there was brokenness, and that’s how they got to their place. And that to me is the most interesting story,” Skarsten says.

“My mom, still to this day, says, ‘Oh well, you play the redeemable bitch.’ But I really love playing those characters because it’s so fun to be bad, but to have the redeemable quality behind it and the possibility of retribution and change, what more could I ask for?”

No stranger to the CW audience after having starred in “Reign,” Skarsten knows her complicated character will start a lot of conversation, especially on social media, among the show’s audience. But she says she is also proud to be a part of a project that will inspire even more meaningful discussion around the importance of representation, being one of the only female-led superhero shows and the only one with one who identifies as part of the LGBTQ community at the center (other DC on CW shows such as “Black Lightning,” “Arrow” and “DC’s Legends of Tomorrow” feature these characters as members of the ensemble, but not as the central focus).