The breakout star of 'The Mandalorian' is impossibly cute for a reason. 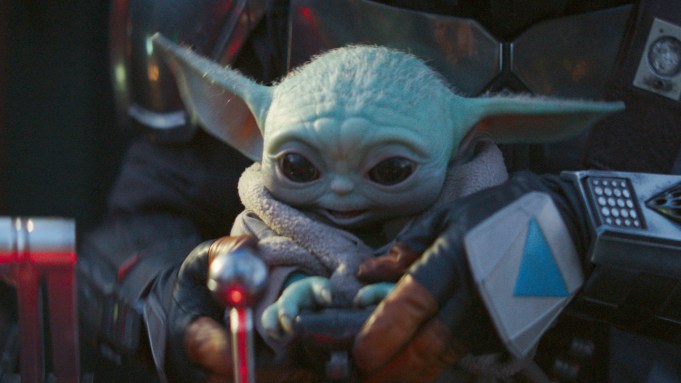 I don’t know what I expected from “The Mandalorian,” but it sure wasn’t falling in obsessive puppy love with a tiny mint green creature whose favorite pastime is snacking on space frogs. And yet that’s exactly where I find myself now, three weeks into an infuriating obsession with the show’s so-called “Baby Yoda” that I can’t seem to kick. As my very wise Variety colleague Meg Zukin puts it, there’s just something about Baby Yoda that makes you want to treasure it as “a pet and a friend and an actual baby.” I know I’m being manipulated into brand loyalty (watch “The Mandalorian” and all your classic “Star Wars” favorites on Disney Plus!), and yet it renders me completely useless as a critical viewer of television. In a single blink of its giant bug eyes, Baby Yoda has me reaching for my TV screen as if I could scoop him out and rock him to sleep myself.

The only consolation I’ve got for this truly deranged behavior is that, if the overwhelming love across the many galaxies of the internet is any indication, I’m far from alone. On the one hand, that’s not altogether surprising; cultish devotion isn’t exactly new to anyone even glancingly familiar with the ever-sprawling “Star Wars” fanbase. But in a time when no one can agree on anything, Baby Yoda has emerged as a grand unifier, an adorable beacon to which countless fans exhausted by perpetually divisive commentary flock. Whether it’s Baby Yoda looking wistfully up into the ether, Baby Yoda zipping away in his floating bassinet, Baby Yoda sipping bone broth, Baby Yoda messing with ship controls like a mischievous jerk of a cat, there’s apparently nothing Baby Yoda can do that won’t lead directly to a meme. (And yes, I know it isn’t “Baby Yoda” so much a creature who shares a species with Yoda, so there, I acknowledged the canonical problem with the nickname, leave me alone!)

The time-honored tradition of shrinking something familiar to inspire fresh cooing isn’t exactly new, especially not to The Wonderful World of Disney. (See: “Guardians of the Galaxy Vol. 2” miniaturizing the giant tree Groot, voiced by real life brick man Vin Diesel, into a tiny sapling.) But in Baby Yoda’s case, it’s relevant that it is a physical puppet with visible peach fuzz atop his little wrinkled head rather than the product of some uncanny valley CGI, a plague with which “Star Wars” fans have become all too familiar. When Baby Yoda stares up at the Mandalorian’s impenetrable helmet and wiggles its impossibly long ears just long enough to convey that it’s thinking very hard, the micro-expressions that reduce the Mandalorian and audience alike to goo are thanks to two separate technicians operating separate parts of its face. Even if it perhaps looks a little less “realistic” than something CGI could create, there’s just something more tangible and relatable about a creature rendered in puppet form (as Netflix’s recent “Dark Crystal” prequel series also proved). It is, to paraphrase another Disney property, more immediately part of our world.

And yes, it’s easy enough to look at a picture and understand that Baby Yoda is objectively adorable, as the ongoing gush of memes from people who have never seen a minute of “The Mandalorian” confirms. But in watching the show, it’s also clearer why Baby Yoda has become such a ubiquitous source of joy. After all, if it weren’t, “The Mandalorian” itself would fall apart.

“The Mandalorian” evolves from a perfectly acceptable Western to something more (ironically) human by the end of its first episode, when The Mandalorian realizes he has to look after this teensy space weirdo with his life. This charge eventually inspires him to buck his shady orders and take off into the sky as the galaxy’s most sought after fugitive — a big swing for The Mandalorian as a character, one who’s so concerned with keeping his true emotions in check that he steadfastly refuses to remove his helmet. (This, despite The Mandalorian being played by Pedro Pascal, an actor with a famously great face). This twist on the initial premise just wouldn’t work if Baby Yoda weren’t immediately charming enough to make viewers understand why the Mandalorian would risk everything in order to save it — or better yet, share his kneejerk instinct to shield it. Baby Yoda has to be, in the words of renowned documentarian and “Mandalorian” star Werner Herzog, “heartbreakingly beautiful.” It’s fun to watch a shrunken Yoda in voluminous robes slurp up frogs, but more importantly, it’s meticulously calculated to serve a larger narrative.

So, sure, Baby Yoda is an inherently manipulative product of the most powerful media conglomerate on this or any other planet. It is also undeniably, desperately cute for very real reasons, the most crucial of which is that uncontrollable protective twinge you feel the second it flicks across your screen. That it also makes it a perfect meme no matter what the occasion is just a glorious bonus.