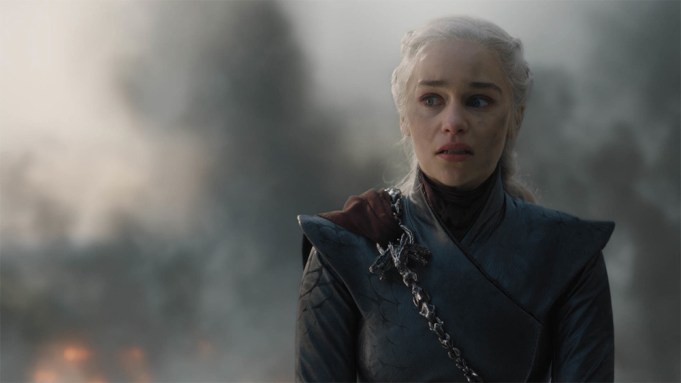 “Game of Thrones’s” penultimate episode built towards a moment in which Daenerys Targaryen, the would-be queen whose will to power has animated the series from its first episode, acted perfectly in character.

That may require some explaining, as Daenerys, a believer in a radical, self-designed theology of liberation and justice, had historically worked to free the prisoners of unjust regimes. And on Sunday night’s episode, she destroyed King’s Landing, incinerating in the process not merely an opposing army that had already surrendered but also untold numbers of civilians. But Daenerys’s tactics have always been more deeply rooted in dominance than in empathy (she spent an entire season insisting a peer united in the struggle with her “bend the knee”), and she has for seasons framed her politics as a generational struggle, rather than an evolutionary process that necessarily includes the freely-given consent of the governed. And, most notably of all, her case for herself as queen, and the actions she’s taken to get there, pivot around the idea of revenge. (Her story begins with her having been placed in exile from a birthright she takes increasingly baroque steps to regain.) If a city has to be wiped out in order to ensure no vestige of the old world remained, it’s a deal Daenerys would have taken at earlier points in the series.

Which is not to say that this episode was perfect. But its story was well in line with the character we’ve known for some time. She is one within whom a grand-scale vision is braided with the need to control the conversation around her (see: the execution of Varys, a nicely-drawn moment in which Daenerys is acting out of sorrowful obeisance to the demands of her view of progress) and to be at the center of the narrative, through love or fear. Clarke sold, well, the moment at which Daenerys has come so very close to achieving what she’s desired her entire life, and the throbbing cross-currents of loathing, pain, and mistrust that burned within her as an easily granted peace sat before her but the gratifications of destruction were but a dragon ride away. (The loathing has been a series-long story; the pain of losing Missandei and the mistrust as rumors about Jon’s rightful claim on the throne were, to my eye, completely credible motivations to send Daenerys on her rampage.) If the episode were missing one specific thing, it would be more close-up shots of Daenerys after she’s decided to burn King’s Landing, in order to allow us into the mentality of a character whose life has built to a decision made rashly and from a place of desperation.

But it makes sense, perhaps, that human-scale photography of Daenerys fell out of the show once she committed to the path of fire over King’s Landing — she was, for the civilians she burned, not a knowable figure but simply a dot in the sky portending doom. And there’s only so much an actor can do to communicate that their decision to commit war crimes is reasonable to them: It’s a journey many simply won’t be willing to go on. This is a specific case where, knowing nothing about what the final two novels of George R. R. Martin’s “A Song of Ice and Fire” series are to contain, I’d speculate that their failure to materialize before the series hurts the show (and may help the book series’ reputation, too). We’re meaningfully excluded from Daenerys’ thought process after she starts incinerating the people of King’s Landing in a way that a literary take on the same event, were it included in a Martin novel, would seem to preclude. That the final novels have not existed as source material for years has been problematic at times for the show, never more so than at a moment in which Daenerys fell out of the story she was instigating.

Daenerys’s decision doesn’t need to be sympathetic, however — just legible to the viewer, which this viewer ultimately found it to be and which others, I suspect, will not, given the tenor of discussion of “Thrones’s” final season in reviews and on social media. (While I’ve found this set of episodes to run a bit hot and cold, I admit I’ve been struck by this, given the creative rebound the show has seemed to experience since a meandering season seven.) There’s another problem of adaptation at play here, too. Thanks to the flattening power of the screen and the show’s tendency to frame Daenerys as a conquering hero with only an occasional, just short of subliminal, touch of irony (as when she frees, and is then carried by, the slaves of Yunkai at the end of season 3, a remarkable moment of simultaneous benevolence and delusional hubris), the character is understood to be a symbol of good. (Clarke, appearing at the Oscars this year, remarked onstage that she wanted to lend Daenerys’ dragons to Ruth Bader Ginsburg, in keeping with the general equation of the character’s firepower with powerful, righteous womanhood.) Drawing out aspects of the character which have been there in more than just her gene pool but hidden in the gestalt complicates a picture that is much more fun to leave a little less novelistic.

Pending a major twist, there are two likely options ahead for the Daenerys we left at episode’s end, the figure in the sky who will, now, come back to ground. She may be killed by someone putatively on her side — the only characters left, really — in an echo of her father’s fate. Or she may govern as a crueler monarch than Westeros had previously seen, keeping her promise to introduce a new politics and “break the wheel” in the most perverse, monkey’s-paw sense. I believe in Clarke’s ability to sell either. And yet I don’t relish a conversation that will likely suggest that Daenerys was betrayed by where she ends up. A path that tacks, hard, in a direction it was always headed isn’t a broken one; the girl sold into marriage has finally gotten what she always wanted, and paid as little attention to the means of getting there as we knew she might.