‘Game of Thrones’: Battle of Winterfell Drains the Tension Out of Season 8 (Column)

Westeros' greatest threat is no more. So... now what? 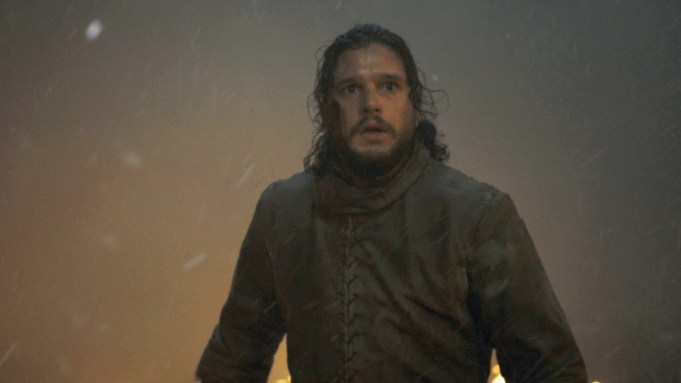 SPOILER ALERT: Do not read before watching “The Long Night,” the third episode of “Game of Thrones’” final season.

There’s never been an episode of TV like “The Long Night.” The long-awaited Battle of Winterfell delivered 82 minutes of heart-stopping, overwhelming, and extremely chaotic warfare on a truly massive scale, bringing the ultimate showdown of humanity versus death to a thrilling end. But after years of “Game of Thrones” building to this climactic moment, the biggest question facing the series and its characters, many of whom are miraculously still standing, is a simple and frustrating one: What now?

For as jaw-dropping as this episode is, the fact that it ends with the Night King’s unequivocal defeat contradicts the show’s own narrative. Arya’s final blow means the definitive defeat of the biggest threat the world has ever seen — and we’re only halfway through the final season. With three episodes left, it sure looks like the show just defeated the Night King in order to throw everyone back into playing musical chairs with the Iron Throne before the final credits roll.

On the one hand, the sun-drenched court politics of King’s Landing made for some of the series’ best moments and can represent “Game of Thrones” at its sharpest. Cersei Lannister has proven herself to be the show’s most charismatic villain by a long shot, and seeing how the new alliances forged up North may join forces to bring her down will no doubt be entertaining as hell. It could also be fascinating to watch everyone snap back into the banal pettiness of clashing dynasties after facing the end of the world.

On the flip side: After years of underlining just how huge and terrifying and all-consuming the threat of White Walker destruction would be, plunging back into “who gets to sit on that pointy chair” will also feel very silly.

The show spent so long convincing its viewers and protagonists alike that the war between the living and the dead was the ultimate conflict that ending it halfway through the season is as jarring as it is anticlimactic. How is anyone who fought in that battle supposed to care about Cersei and her frat bro fiance after staring literal death in the face? When Daenerys inevitably re-commands those stubborn Northerners to bend the knee, why would they do anything but laugh after beating back the reanimated corpses of their loved ones? Without knowing quite what’s to come, it’s safe to say that watching the show get re-invested in the Lannister versus Targaryean versus Stark drama after cashing all its chips in on saying none of it matters will, at the very least, be downright bizarre.

This, plus the fact that not a single major death in “The Long Night” was at all narratively shocking, shows how much “Game of Thrones” has lost its handle on raising the stakes like it once did so well. With George R.R. Martin’s dense and often ruthless text to guide it in the early seasons, “Game of Thrones” always managed to balance familial infighting with overarching threats while still pulling the rug out from under our expectations. But the further the TV show got from the books, and the more it pushed the Night King as its ultimate horror, it somehow became both more black and white and more muddled in what it was trying to say. “Absolute power corrupts absolutely” gave way to “some [undead] men just want to watch the world burn.”

There could be something fascinating in telling the story of a traumatized world rebuilding after the end of the world and relapsing into petty squabbles. The White Walkers, for all their mythic might, were never as interesting as the bickering humans playing mind games with each other, but the show seemed to forget that as it set up the Night King to be the Biggest Bad that anyone on “Game of Thrones” would face. Now that he’s neutralized, it’s going to be extremely tricky for the show to snap back to royal basics and make them feel as weighty as they did before the potential apocalypse. Only time will tell if these final episodes can pull that kind of hairpin turn off, but looking back at multiple seasons building up to the idea that the Iron Throne doesn’t ultimately matter, it’s still baffling to watch the final season rush to forget it.