Why the ‘Game of Thrones’ Finale Couldn’t Have Satisfied Everyone 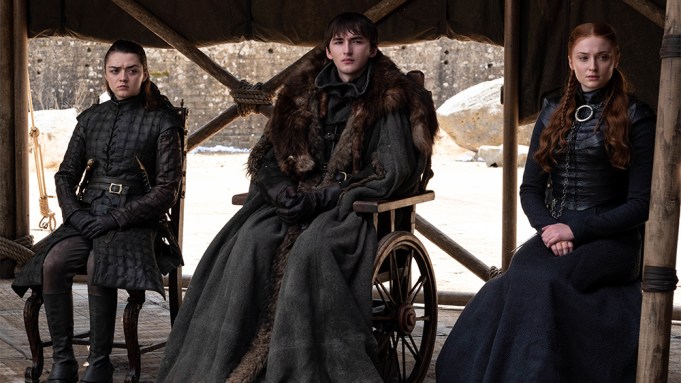 The “Game of Thrones” finale may have achieved a strange feat: Aiming for fan service while being constrained, by its very nature, to the reality that it would end up pleasing only very few.

The episode was larded with character touches designed for devotees — from a title, at long last, for fan favorite Bronn, to the consolation prize of Sansa, whose arc throughout the series has been perhaps the most profound, getting to rule over her ancestral home of Winterfell. And yet it was tied to an ending that, coming as it did from an unfinished series of novels whose conclusion the series has been tied to since its earliest going, could barely have been made satisfying, and certainly not in the time the show had given itself for its final season.

That final season did certain things very intelligently, among them killing off the Night King in the third episode to allow three installments devoted solely to the endgame in Westeros. What it failed to do was seed the ground either for Bran’s ascension to rule the Seven (or, with an independent Winterfell, Six) Kingdoms or, more crucially, for the sudden genesis of democracy. The jump from Daenerys’s death amidst snowfall and her removal by dragon from King’s Landing to, suddenly, a sunny clime in which Westerosi potentates are, putatively only weeks later, discussing the management of government is jarring and random. It bears the tang of fan service (in that Tyrion introduces the concept of a vote, and Samwell Tarly ushers it along, both behaving not exactly out of character but along the lines viewers might hope they would), but yields a result that’s so hostile to viewers who’ve followed this series all along that Tyrion has to explain it to characters and fans alike. The symmetry of Bran falling out of a window in the first episode and ascending to rule in the last picked up whatever poetry Peter Dinklage could lend it through narration, but falls flat given how meager a presence Bran has been for seasons now, delivering gnomic provocations but almost no plot action.

The show that David Benioff and D. B. Weiss had made was one that seemed to be breaking towards any of the three other Stark siblings — Sansa due to her long-running narrative of learning the rules of the game, Arya for her doggedness, Jon for being one of the show’s two protagonists (and for killing the other). The story they inherited zagged another way, and either to preserve an elemental surprise or simply by dint of lacking more story time to set up what was to happen, viewers were carried along absent preparation or sense. A very late sequence cross-cutting between Sansa, Arya, and Jon, walking respectively through Winterfell, across a ship headed to colonize points unknown, and on a return visit to the North, worked well as a bit of deflated and mournful story, even as elements of it (Sansa got her crown!) seemed designed to elicit cheers.

A viewer doesn’t know how much of the story truly belongs to Martin, which makes it difficult to critique this episode on a plot basis. Daenerys’s death, for instance, was depicted powerfully and movingly by both Emilia Clarke and, as her killer Jon, Kit Harington; it also fell strangely early in the proceedings, so much so as to leave perhaps too much time for debates about the origins of democracy to sap momentum. It was preceded, too, by a disquisition by Tyrion as to Daenerys’s entire character arc up to this point and why it makes her quite so dangerous. While Peter Dinklage earned his fourth Emmy by making this Wiki-dump as compelling as it was, her turn to darkness was earned or was not: Reciting a list of facts cannot make up lost time.

It was as though the show, burdened with a story near-impossible to carry across the finish line, lost its nerve. Clarke’s best-ever acting on the show, likely, was in her lengthy monologue to her soldiers, declaring to them in a sequence inflected with the techniques of Leni Riefenstahl that their battle would go on until all inequity in the world had been flushed, or burned, out. (That it was a speech in a foreign tongue made Clarke’s achievement all the more impressive, as she transmitted the conquering icon through the haze of linguistic confusion.) This speech, alone, made the case that Daenerys was a demagogue in dangerous thrall to the power of fire to redefine those lives it leaves standing in its wake. That the case was made doubly was making up for lost time; simply telling the story as it stood was enough.

Similarly, there were arguments for making Bran king, none of them elegantly voiced in a Tyrion speech that seemed like a meta-argument about the nature of the show itself. The only moments when the show trusted its own power may have been the most egregiously silly, turning a show that had things to say about the nature of fantasy stories for quite so much of its run into, well, a very-well-executed fantasy story, nothing more. To wit: The banter among the council of elders hastily assembled in King’s Landing — to say nothing of its existence (how did they all get there without getting killed by aggrieved Dothraki?) — works within the context of the show only as “Star Wars Christmas Special”-style fan fiction. (Taken on its own terms, it’s fine.) Jon’s closing walk into the woods (joining his direwolf on the way) made a case that all within this show is cyclical and that the watch continues — but also worked as a melodramatic farewell to a character whose glower stands in for the concept of duty. And his having killed Daenerys earlier in the episode came through a method worthy of a B-movie: Embracing her, then stabbing her in the heart. His tears as she bled out through the mouth and eyes were as big and bold as the ones the show wanted to induce in every viewer.

Which makes this a sort of kitsch. This show’s critics would say it was always just a goofy show about dragons, and I won’t dissuade them by saying that the departure of Drogon, flying into darkness to leave Westeros a place absent magic once more, was the episode’s single most moving moment amidst surroundings far sillier. (Samwell Tarly finishing a history of Westeros that shared a title with this series’s source material was probably the low point of absolute absurdity.) The show, at its best, roused emotions higher than tears, and thoughts more probing than wondering how everyone found themselves together and why they all agreed Bran should rule. There were moments like that within an episode that generally did not rise to meet them. But that great show marching to its own tune — not this okay one rushing to finish a story — is the show “Thrones” fans will remember.

That the show didn’t do whatever Martin is to publish justice is a shame. But what it did accomplish was something generational. More than most series, this show has demanded unusual loyalty throughout its run, a loyalty rewarded with standout episodes and moments that naggingly suggested, throughout, that there might be a higher calling for a show about gamesmanship than even providing a satisfying answer to the question of who wins. The finale, paradoxically, may matter less here, so obsessively devoted was the show’s fanbase to minutiae of every installment as though it were the season’s marquee episode.

And in their service — perhaps to its credit or perhaps because it recognized how diffuse the audience’s loyalties had become — the series’ final episode stumbled into enough endings for each viewer to choose his or her own. I’m taking any of the three in which the Stark siblings live on in the unknown, fighting new battles outside King’s Landing, and leaving Bran to Martin’s novels and the incessant banter around him to the fans the show thinks it’s serving. The best series endings allow the story to live on in the viewer’s mind even after the plot has ended. And while nothing about Sansa, Arya, or Jon’s storyline at episode’s end seemed like a crucial part of the King’s Landing endgame or particularly designed to serve fans in the way Tyrion’s banter had, they mattered all the more for that. Theirs will be among the stories I return to when I recall what “Game of Thrones” was for a decade.