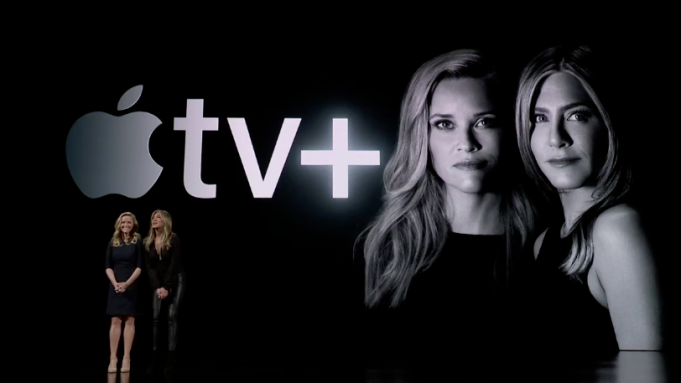 With the highly-anticipated launch of Apple TV Plus Nov. 1, Variety television critics Daniel D’Addario and Caroline Framke discuss the service’s present and what could be its future.

Daniel D’Addario: If Apple TV Plus’s entry into the marketplace is an event — which, given the size of nearly everything Apple does, it probably should be — then it’s hard to know who for.

The four big shows the service is launching with vary in quality but have, to my eye, no clear vision guiding them. Each, really, has a constituency it doesn’t share with any of the others. There’s a fairly undistinguished teen comedy (“Dickinson”), a drama about gender roles in the workplace (“The Morning Show”), an outright terrible dystopian fantasy series (“See”), and a promising if occasionally clichéd alternate-history space-race show (“For All Mankind”). And if you’re a “Dickinson” viewer, you’re probably not going to check out “See.”

That describes, say, Netflix’s role in the marketplace, too — it launched with “Orange Is the New Black” and “House of Cards,” two shows with fairly different value propositions for viewers. But Netflix had a catalog of other series and films it hadn’t produced at launch (something Apple lacks), and it quickly ramped up into a content-creation behemoth.

Apple’s first round of output suggests it’s not going to get there, nor is it trying to: None of the shows, to my eye, are truly successful because each feels in its own way curated to death, overworked with an eye on transmitting quality rather than actually allowing it to spontaneously happen. The visuals are lush and the collaborators are A-list, but there’s something dead about the service’s offering almost to a one — engineering that works for an iPad, but not for TV.

So if it doesn’t have a lot of content, no part of it matches with any other part, and it’s generally underwhelming — who will sign up? (Yes, it may well improve and evolve, but Apple of all companies knows launches are important.) Caroline, what do you think Apple’s best move here is — simply to remind people how much they love Jennifer Aniston and Reese Witherspoon? And do you take a rosier view of the service so far?

Caroline Framke: As of this writing … no, no I do not. Like you, I’m confused by the array of shows launching it, none of which are stellar enough to justify someone buying in to a whole new streaming service. “The Morning Show” is their biggest and splashiest bet, and Apple seems to know it. (It’s definitely not a coincidence, for example, that this is the month Aniston chose to join Instagram.) And yet as I was watching it, all I could think is that its morning “Newsroom” vibe feels five years out of date, despite its emphasis on being timely with its viral videos and #MeToo references. In fact, that diagnosis also applies to its launch shows, which largely have vaguely intriguing premises with uninspiring executions that we’ve now seen dozens of times before. The one exception from where I’m standing is “For All Mankind,” but its lack of shiny stars seems to have hurt it on the promotional front, at least.

For my money, though, the biggest problem facing Apple Plus is one you mentioned: its total lack of a content library. Even when Netflix only had a couple stray originals, it had already lured in subscribers with its back catalog (which, in the face of Netflix’s ongoing tidal wave of originals, is now rapidly dwindling). So while Disney Plus’ TV offerings aren’t much more exciting than Apple’s save for its upcoming “Star Wars” series, its enormous library is more than enough reason on its own for people to subscribe. On top of decades of Disney/Marvel/Fox movies, original TV shows will just be the bonus cherry on top until proven more substantial over time. Apple Plus, at this point, doesn’t have that luxury — and I’m just not convinced that its initial output will entice as many subscribers as they need to sign up.

D’Addario: Right. Will people pay five dollars a month to watch Jennifer Aniston? To your point about her having joined Instagram — following her there is free. Plus, I share your dim view of “The Morning Show,” and find it easy to imagine those viewers who do get the service to screen the series eventually falling off and deciding this is five dollars they could be putting towards one of the other streaming services.

What confuses me about the lack of catalog, besides its basic wrongheadedness as regards attracting new subscribers, is that it flies in the face of this company’s work elsewhere. Apple already allows listeners to stream songs, through the subscription-based Apple Music, that Apple itself does not produce; they for many years saw success selling seasons of catalog TV through iTunes. Knowing how much of an inducement old shows have been, I’m surprised Apple didn’t try to vie for some show, any show, with an existing cult following. It might not have been on-brand for the company to buy, say, “South Park,” currently on the market, but I’m not sure somewhat raunchy humor of “Dickinson” (recasting the Belle of Amherst as a teen out of “Riverdale”) really is, either.

Framke: What we’re both circling here is the fact that, given the four shows we’ve seen, Apple Plus doesn’t seem to have much of a brand at all, unless it’s “expensive.” All the shows look great, but they each seem built to grab a different audience. “Dickinson” feels like it was ripped from The CW, “See” from Syfy, “For All Mankind” from AMC, and “The Morning Show” from…well, whatever the combination of ABC primetime and Showtime would be. (I was going to say CBS All Access, but that’s rude to “The Good Fight.”) Maybe the logic there is that Apple is going for the broadest audience imaginable, but like you said: who wants to pay $5 a month in order to see a single show? The only exception I can think of is for something like “Star Trek: Discovery,” which builds on one of TV’s most recognizable franchises to tap into one of the medium’s most passionate fanbases, period. For as much as Aniston’s star is on the rise thanks to the streaming resurgence of “Friends” (what a world!), I just don’t see that being enough to keep an entire service afloat.

But what about beyond these four shows, since Apple’s announced a whole slate of other originals yet to come? I’m curious to know your thoughts about what Apple should be trying to do going forward, if indeed this initial launch lands with a softer thud than a bang. For my money, their most promising get is “Oprah’s Book Club” — never underestimate the draw of Oprah Winfrey and her crowd-pleasing books!

D’Addario: Plenty of stuff coming sounds good (though “The Morning Show” sounded good to me, too): Octavia Spencer’s “Truth Be Told,” about a true-crime podcaster, is intriguing, and M. Night Shyamalan’s “Servant” comes at a moment of newfound prominence for the director — it’s kind of a get for Apple. Which makes me half-wonder if Apple might have better served itself by giving more inventory to subscribers at launch — launching with these four shows, plus “Truth Be Told,” plus “Servant,” plus… It only pays to be curatorial if the artworks in the collection are really worth watching.

But then, given the general tone of creative confusion emanating from this launch, maybe I should feel fortunate as a critic four shows is all we got. I’d add to your comment that the brand here is “expensive” that it’s also risk-averse and safe, which absolutely none of the best streaming shows so far have been.

Framke: Agreed. Even as “The Morning Show” in particular approaches controversial issues — including sexual harassment, political polarization, and the sanitization of news — it always backs off before establishing too firm a point of view. It’s trying to have it both ways, which might be safer in the long run, but that’s just not the creative space in which exciting television gets made. I’ll hold out hope that the money and star power Apple has at its disposal will yield more interesting results in the months to come, but for now, it has real work to do in order to establish itself as a singular player in an increasingly crowded industry.

More from Apple TV Plus: