Review: A Slow-Paced Globes Are a Little Too Nice 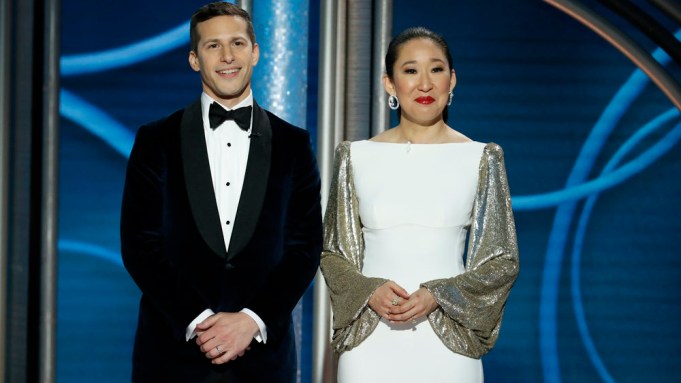 In an era in which awards-show moments are parsed within an inch of their life, maybe it makes a certain sort of sense to lean on niceness.

Opening the Golden Globes on Sunday night, co-hosts Sandra Oh and Andy Samberg delivered their versions of roasts to the guests in attendance — pleasant compliments delivered with the cadence of cruel burns. It was a long way from the vitriol of infamous past host Ricky Gervais. And it was a bit that went on a few beats too long: As an impulse, niceness is, well, nice. But as a comic angle, it’s limited.

Samberg, a former “Saturday Night Live” sketch comic and Emmys host, and Oh, known for TV dramas including “Grey’s Anatomy” and “Killing Eve,” seemed strangely matched, as though the respective halves of the TV screen each one occupied was its own universe. Samberg’s energy was, as ever, chummy and genially happy to be in the room; Oh was visibly nervous and often openly emotional, both when winning her own Globe (for her role in “Killing Eve”) and when giving an earnest tribute to the ways in which Hollywood is moving toward justice and representation during the monologue. Neither energy is bad — indeed, a year after the grassroots movement that turned the Globes into a staging ground for conversations about equality and assault, Oh acknowledging progress is welcome. Oh and Samberg couldn’t help but feel mismatched, though, and it made the evening feel shaky.

Credit to the producers, at least, for an interesting idea; Oh and Samberg are both appealing personalities and both got off good lines. (The best of them tended not to be the ones clearly written by and for people who spend all of their time reading entertainment coverage online, like an askew aside by Samberg remarking on recent criticism of “The Marvelous Mrs. Maisel” as anti-Semitic, which was meaner and more inside-baseball than the ceremony and hung in the air awkwardly.) The preparation for the show seemed to have stopped after the host search, though; the announcing and especially the pacing were slack and strange all night. Given the concerns on the part of TV producers about flagging viewership, each live broadcast can and should be an advertisement for the crispness and polish of live television, not the baggy and saggy show that staggered to its conclusion late.

Always a freewheeling show, the Globes seemed especially loose this year — and ended up feeling less like a party than a broadcast that wasn’t trying too hard to entertain. Many winners (though, gloriously, not Glenn Close, giving an aria-like speech one suspects has been slowly composed over many years) either read off computer printouts or, in the case of Jeff Bridges, improvised long past the point improvisation was charming. And the big winner, “Bohemian Rhapsody” won its two awards, for best actor and best drama, at the very end of the night, and seemed to have swooped in from nowhere.

Its presence as a prizewinner, too, indicated the limits of niceness as the big idea for a broadcast. “Bohemian Rhapsody’s” credited director, Bryan Singer, has been accused of sexual assault of a minor. Such allegations suggest he is the sort of person who, if enough progress had been made to really merit the sort of celebration Oh issued from the stage, would be working on making his wrongs right rather than on film sets. A laceration of Singer on the hosts’ part would have been impossible tonally and practically. But by show’s end, the chummy celebration of a hosting duo with little in their sensibility more critical than “Awesome!” didn’t seem to fit, either.