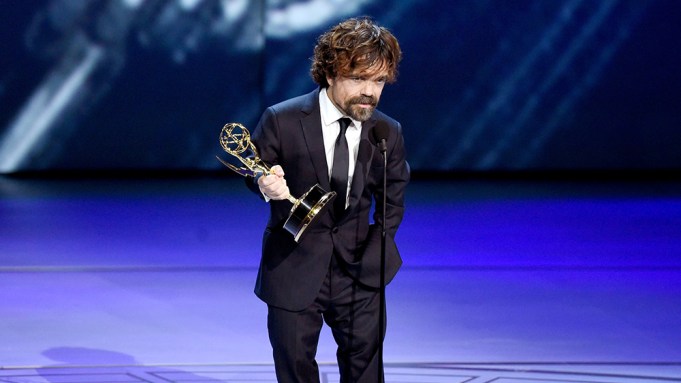 Peter Dinklage got emotional as he accepted the supporting drama actor award for his role of Tyrion Lannister in HBO’s fantasy epic “Game of Thrones” at the 2019 Emmys.

“I count myself so fortunate to be a member of a community that is nothing but all about tolerance and diversity. Because no other place could I be standing on a stage like this,” said the actor, who was born with dwarfism.

“It’s been about 10 years, all said and done, since the moment I met Dave and Dan until right now,” Dinklage said, referring to series creators David Benioff and D.B. Weiss. “I had no idea what I was getting myself into, but I knew David and Dan were quite brilliant. We did nothing but sweat, we did nothing but laugh. Dave and Dan, we literally walked through fire and ice for you, literally. And I would do it all again in a heartbeat.”

He was bleeped as he described his colleagues as “the most talented motherf–king people.”

The award for the final season of the show was his fourth win for the role overall and second consecutive win, setting a record for the most trophies ever for supporting actor in a drama. He was nominated eight times for his role as the youngest of Tywin Lannister’s three children.

Dinklage beat out his “Game of Thrones” costars Alfie Allen and Nikolaj Coster-Waldau to take this trophy, as well as a duo of performers from “Better Call Saul” (Jonathan Banks and Giancarlo Esposito), Michael Kelly (“House of Cards”) and Chris Sullivan (“This Is Us”).