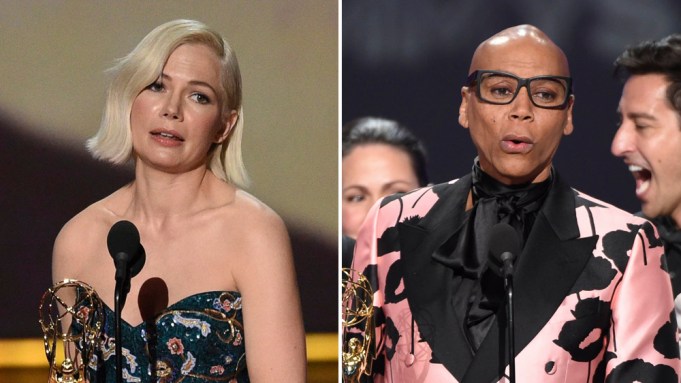 As the country inches closer to the 2020 election, Emmy winners on Sunday night used their time in the spotlight to advocate for political causes. Celebrities such as Patricia Arquette, Michelle Williams, and RuPaul Charles all urged activism from viewers while accepting their awards.

While accepting her Emmy for her supporting role in Hulu’s “The Act,” Arquette gave a passionate plea for transgender rights, turning to her late sister Alexis Arquette, a transgender actress who died in 2016 at age 47. ““Trans people are still being persecuted,” she said. “I’m in mourning every day of my life, Alexis, and I will be for the rest of my life for you, until we change the world so trans people are not persecuted — and give them jobs. They’re human beings, let’s get rid of this bias we have everywhere.”

Emmy winners Alex Borstein and Williams also used their time on stage to advocate for their female peers in the entertainment industry. Borstein, when accepting her second consecutive win for her supporting role in Amazon’s “Marvelous Mrs. Maisel,” thanked her mother and grandmother, both Holocaust survivors.

“My grandmother was in line to be shot into a pit,” Borstein told the audience. “She said, ‘What happens if I step out of line?’ [The guard] said, ‘I don’t have the heart to shoot you, but somebody will,’ and she stepped out of line.”

Williams piggybacked off of Borstein’s feminist comments while on stage to accept her Emmy for her leading role in “Fosse/Verdon. The actress called out pay inequality in Hollywood and beyond, expressing her appreciation to FX and Fox 21 studios “for supporting [her] and paying [her] equally” for her role in the limited series.

She continued, “The next time a woman, and especially a woman of color, because she stands to make 52 cents on the dollar compared to her white male counterparts, tells you what she needs in order to do her job, listen to her, believe her, because one day she might stand in front of you and say thank you for allowing her to succeed because of her workplace environment — and not in spite of it.”

RuPaul Charles also got political on stage, urging viewers to vote in the 2020 election while accepting his Emmy for VH1’s “RuPaul’s Drag Race. “Speaking of voting for love, go and register to vote,” he said.

Activism wasn’t only present on stage, though. Attendees also voiced their political advocacy through symbolic accessories and clothing on the Emmys purple carpet before the show. “Orange is the New Black” star Laverne Cox showed off a rainbow-printed clutch in an effort to raise awareness for an upcoming LGTBQ Supreme Court case that will ultimately assess if discrimination based on sex should be illegal. In addition to her accessory, which donned the phrases  “Oct. 8,” “Title VII” and “Supreme Court,” Cox also brought ACLU staff attorney Chase Strangio as her date.

“We have about two and a half weeks to really raise our voices and say this not okay,” Strangio told Variety on the carpet. “We do not want to roll back civil rights protections for anyone and the stakes could not be higher.”