Emmys 2019: The Biggest Snubs and Surprises 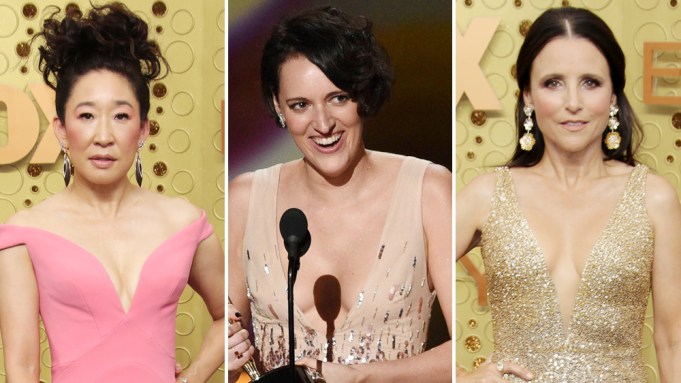 Although the HBO series”Game of Thrones” and “Veep” both came to an end this year and therefore were seeing their final chances to be celebrated at the Emmys, the voting members of the Television Academy did not just tick off all the boxes for those two behemoths and call it a night. In fact, far from it.

At Sunday’s ceremony, “Game of Thrones” won the drama series trophy and supporting drama actor for Peter Dinklage, while “Veep” was shut out.

SNUB: Julia Louis-Dreyfus and “Veep”
The titular star of HBO’s “Veep,” who beat cancer last year, was a frontrunner going into nominations at this year’s Emmys, but at the end of the day she didn’t get enough votes to win her seventh statue for the role. If she had won, she also would have become the most decorated performer by the Television Academy. The final season of the political comedy itself also lost all of its major races, from comedy series to supporting comedy actor and actress.

SURPRISE: Jodie Comer
The “Killing Eve” star bested some tough competition in the lead drama actress category, including her own costar Sandra Oh, who was nominated last year and seen as a frontrunner this year. But Comer’s seductive assassin, Villanelle, proved too good to pass up for Academy members, giving the actress her first-ever Emmy.

SNUB: Ava DuVernay
The Oscar nominee and previous Emmy winner (“13th”) wrote and directed all four episodes of “When They See Us,” the dramatized telling of the 1989 Central Park jogger case that saw five teenage boys wrongfully convicted and imprisoned for a vicious assault. It was an emotional tale that had everyone talking when it dropped on Netflix, but ultimately she lost the limited series/TV movie writing and directing awards to players from HBO’s limited series “Chernobyl.”

SURPRISE: Phoebe Waller-Bridge and “Fleabag”
Many pundits were anticipating the “Fleabag” auteur would take the comedy writing trophy (and she did), but she also won for lead comedy actress — over longtime favorite Julia Louis-Dreyfus (who was nominated for the last time for her titular role on HBO’s “Veep”), as well as last year’s incumbent winner Rachel Brosnahan (“The Marvelous Mrs. Maisel”), to name a few — and nabbed the coveted comedy series trophy.

SNUB: “Schitt’s Creek”
The little Canadian comedy that could pushed onto the Emmy ballot with four noms this year, including comedy series and lead comedy actor and actress, proving voters didn’t mind being a little late to celebrate a long-running series. But not even the star power of Catherine O’Hara and Eugene Levy was enough to topple the snarky “Fleabag.”

SURPRISE: Jharrel Jerome
The actor who played the real-life Korey Wise in both parts of “When They See Us” (in his teenage years when he was first falsely arrested in the 1989 Central Park jogger case and then more than a decade later, as he literally grew up in prison) was the youngest in his category and the freshest face when it came to his résumé, but the power of his performance here prevailed over the bigger names.

SURPRISE: Julia Garner
The actress won her first-ever Emmy for the second season of “Ozark” after being on the ballot alongside four powerful players from “Game of Thrones” and Fiona Shaw of “Killing Eve.”

SURPRISE: Jason Bateman
The “Ozark” actor-producer-director took the drama directing trophy in a tightly packed category that included multiple entries from the final season of “Game of Thrones.”

SURPRISE: Jesse Armstrong
The second season of “Succession” has been lighting up social media, and the added buzz undoubtedly helped scribe Jesse Armstrong go all the way for the win for drama writing over the series finale of “Game of Thrones,” as well as a hanging second season episode of “The Handmaid’s Tale” and the fourth-season finale of “Better Call Saul,” among others.