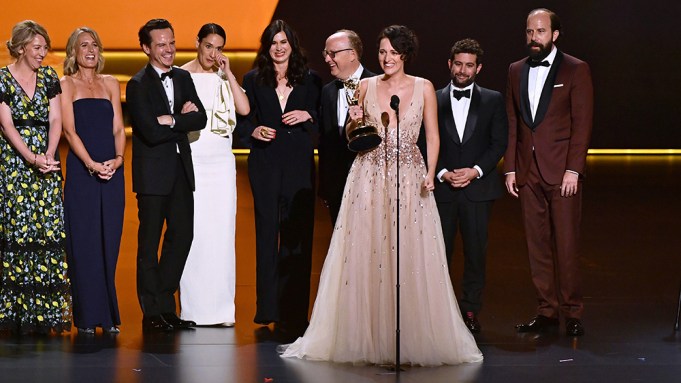 Phoebe Waller-Bridge’s critically-acclaimed auteur comedy “Fleabag” had only one chance to clean up at the Emmys, and while it didn’t fully sweep comedy categories, it came damn near close.

“It’s the things that dreams are made of,” Waller-Bridge said backstage as the “Fleabag” team cheered its four big wins. She acknowledged her shock that a low-profile show from the U.K. could triumph across the Pond at the Emmys. “I feel like I’ve come in the back door and nicked something to be honest with you,” she said backstage.

Waller-Bridge also stressed that “Fleabag” has run its course despite the strong response to season two.

“To be honest this just feels like the most beautiful, beautiful way to say goodbye to it,” she said. “It does feel like the story is complete. And although it is so nice to hear that so many people have loved it — maybe she shouldn’t have waved goodbye at the end — it does feel right.”

“Fleabag” was a very personal show to Waller-Bridge but it was not strictly autobiographical, she stressed when pressed about whether she had ever in fact fallen for a “hot priest,” the character played in the series by Andrew Scott.

“Usually I’m a big fan of write what you know but in this case it wasn’t so on the nose,” she said. “I knew I wanted to write about religion and faith (in season two). The more faith came in and the more something had to change in her.” She joked that Scott’s “own heart and hotness” helped her mold the storyline for the season that resonated so strongly with Emmy voters.

In accepting her first win of the night, for comedy series writing, Waller-Bridge admitted that nothing about her work as an auteur is easy.

“I was in a one-woman show at the Edinburgh festival in 2014,” she said, accepting the comedy series Emmy. “The journey has been unbelievable. Two brothers, Harry and Jack Williams, I told them two jokes over a pint and they said, ‘We’ll option you.’ That’s the kind of meeting you dream of. So, thank you for supporting me.”

Waller-Bridge also acknowledged “Hot Priest” Andrew Scott while she was on stage accepting the comedy series trophy. Although Scott did not earn an individual acting nomination, she noted his importance to the second season of the show — as well as to the response of that season.

“Season 2 would not have happened and exploded the way it did if it weren’t for Andrew Scott,” she said, “who came into this, into our world like a whirlwind and gave a performance of such depth and complexity that it elevated the whole thing for all of us.”

Although “Veep” and “The Marvelous Mrs. Maisel” were perceived as frontrunners in the comedy series race before nominations were even announced, “Fleabag” and Waller-Bridge personally steadily gained heat in the race.

Variety‘s own television critic Caroline Framke noted, “The second season of ‘Fleabag’ is a genuine tour de force that more than proved Waller-Bridge’s writing and acting bona fides; from where I’m standing, it’d be embarrassing for the Emmys not to acknowledge either.”