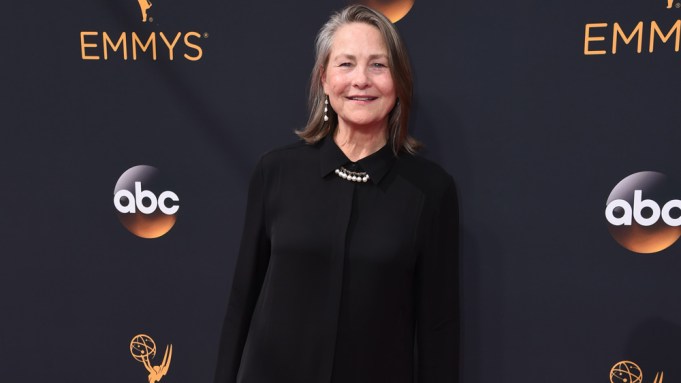 Cherry Jones won the 2019 guest drama actress Emmy for her work as the titular character’s mother, Holly Osborne, in Hulu’s “The Handmaid’s Tale.”

This was Jones’ second consecutive nomination for the role but first win. Interestingly, both noms were for her work in the second season of the dystopian streaming series. After a few episodes were released outside of the 2018 Emmy eligibility window, the Television Academy agreed that they could count towards this year’s awards. That decision allowed Jones to be submitted again, and it resulted in her second-ever Emmy win (after previously taking the trophy in 2009 for her supporting dramatic work on “24.”

This year, Jones was nominated alongside Laverne Cox (“Orange is the New Black”), Jessica Lange (“American Horror Story: Apocalypse”), Phylicia Rashad (“This Is Us”), Cicely Tyson (“How To Get Away With Murder”) and Carice Van Houten (“Game of Thrones”).

Cherry Jones made a reference to one of the night’s earlier winners, NASA Jet Propulsion Laboratory for NASA TV’s “NASA’s Insights Mars Landing,” whose winners urged the crowd to consider careers at NASA.

“I’m going to get in touch with my inner nerd and go work for JPL,” Jones joked. “I want to go make movies on Mars.”