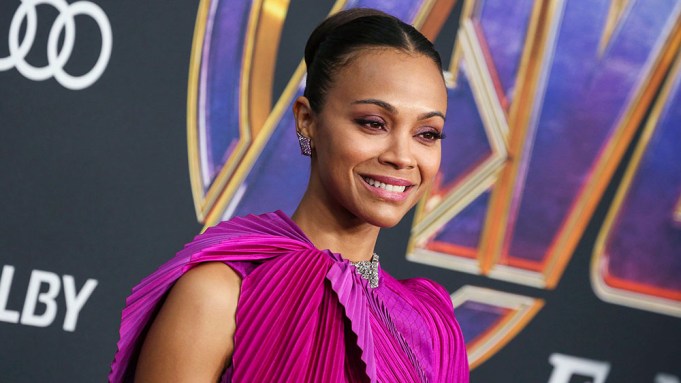 Some actresses dream of winning an Oscar. For others, an Emmy or Tony. But Zoe Saldana has a different dream now that there’s a chance that “Avengers: Endgame” could eventually surpass “Avatar” — which also starred Saldana — as the highest-grossing movie of all time. “If it does, I’m so much of a geek that I would want to see if I can get into ‘The Guinness Book of World Records,’ ” Saldana told Variety at global health nonprofit Jhpiego’s Laughter is the Best Medicine gala on Monday night. “Because if I broke a record, that would be my shot.”

Her odds look pretty good, as “Endgame” has already shattered opening weekend records with its $1.2 billion global debut. And Saldana broke her own “phone-free Friday” rule because her far-flung co-stars were blowing up her cell with text messages as movie profits soared. “We were sending each other messages, but I think I was sending more messages to my reps,” said Saldana as she shot a smile to her longtime publicist, Gary Mantoosh.

“I’m such a mom that I [always] put my phone down on Friday and I am just changing diapers and things like that,” said Saldana of her usual routine. “But it was really beautiful to be reminded that I was a part of something just that big — again.” And although one might imagine the sound of a mic drop at this moment, Saldana took a more humble approach. “I feel like I had the same reaction this past weekend that I did years ago for ‘Avatar,’ where it over-exceeded all my expectations. And I’m just grateful.”

She was similarly thankful to receive Jhpiego’s visionary award along with her husband, artist Marco Perego, in recognition of their philanthropic efforts aimed at children in the U.S. and abroad. “How do I feel to be honored? Like I haven’t done enough actually,” Saldana said. “So it was hard for me to accept this recognition because I feel like my husband and I are just getting started, and when it comes to using our voices to amplify causes, we have a long way to go. But we’re certainly very inspired by organizations like Jhpiego.”

“I became a mother less than five years ago and only lately am I finally tapping into the great importance of having good coverage — or access to health care,” added Saldana. “I like how much Jhpiego amplifies the importance of medical care for families — for women and children — especially throughout pregnancy. That is not something that many mothers have access to around the world, but this is an organization that has worked in 155 countries. Most of them are developing countries that need attention and care.”

Fellow honorees included Wyck Godfrey, president of Paramount’s motion picture group, and his wife, Dr. Mary Kerr, a renowned obstetrician-gynecologist. “I actually found out about about Jhpiego though Kent Alterman at Comedy Central and then [Paramount CEO] Jim Gianopulos, both of whom were honored in previous years,” Godfrey told Variety. “I was always wondering: ‘Why am I here? Why am I writing a check?’ And then I found out it’s a program, where my wife went. We had to get involved. The real excitement for me is that I work in the movie business and Mary is an OB/GYN. The fact that we can find an organization that utilizes both of our strengths is really exciting.”

“We actually went to Uganda and Kenya,” Godfrey recalled of an experience that could pave the way for a post-Paramount career move. “We went to these villages and literally all of the women would gravitate toward Mary. She would basically take them into the huts and start helping them with their health issues. I was thinking: This could be a future after I get kicked out of the movie business!” Kerr cracked a smile and said, “Absolutely! We look forward to it.”

As it turns out, the best part of being married to a doctor is that it puts all of that Hollywood drama into perspective: “I come home every day and go: ‘Honey, this guy yelled at me,’ ” Godfrey said. “And she’s like: ‘Hmmm. I had to tell somebody really bad news that affects their entire life.’ I’m like: ‘You win. Your job is harder than mine — and more important.’ ”