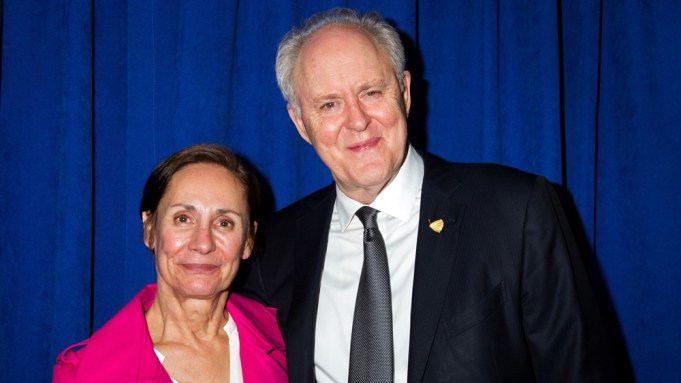 When Lucas Hnath first conceived of “Hillary and Clinton” in 2008, he was writing for and about a very different America. Now, a total reimagining of the show has made its way to Broadway with Laurie Metcalf and John Lithgow in the titular roles. At the opening on Thursday night, the cast and creatives talked about how the play has changed post-2016 – and revealed some of their own hopes for 2020.

“Hillary’s loss two years ago was one of the great, great disappointments of my life,” Lithgow told Variety after the premiere. “I know her slightly, but much more important, I’m a supporter of hers – I admire her and Bill a lot, and I think it was a bad turn of events for the country.” That made the prospect of starring in “Hillary and Clinton” both attractive and anxiety-inducing: “I automatically was worried about what they would think about it even being produced – but I also just loved the audacity of taking on the story of these two characters when they’re still very much in our lives.”

Metcalf navigated that by approaching Hillary as she would any new character. “It’s stipulated that we don’t imitate them, so that made it a little easier. I can’t do impressions anyway, so if it depended on that, I wouldn’t be in the play!” she told Variety, laughing. But the work did lead her to reflect on everything the real Hillary Clinton had been through. “I can’t imagine how hard it is to be on a campaign trail, which is where this is set. The stamina that it takes, and the focus – I don’t think people are necessarily built to do that kind of thing for a year and a half, so I have a lot of respect for that.”

Metcalf is also conscious that debates around how “human” a candidate appears are more relevant than ever heading into 2020. “I’m excited about all the candidates right now, and I’m anxious to see who it’s going to end up being. But like Bill says in the play, ‘People don’t vote with their brains.’ It’s never not emotional. You can’t suppress that as how people relate to who they see, especially on a TV screen.”

That tension was what attracted playwright Lucas Hnath to the Clintons in the first place. “I’m always interested in these people that we think we know, and how our knowing of them has reduced them down to two-dimensional images – I always try to subvert that,” he told Variety. “I do no research at the beginning, because I’m just trying to see them as people, treating them almost like you treat the Greek myths – to be very nerdy, Philoctetes was the basis for this one. Later, I consume a huge amount of material, even up to the last minute. While we were in previews, I was reading Carol Gilligan’s latest book, and Rebecca Traister’s newest book – but the goal is never to make it completely accurate. It’s always a question of, can the reading help me say something more insightful?”

While this version of the play is very different from the one staged in Chicago during the 2016 primary, that run also involved plenty of last-minute adjustments. “I feel like the play changed on a weekly basis, because the news cycle would just keep moving,” Hnath said. “The goal was not trying to make it match but rather to make it dodge the news cycle.”

The rewrite, which is still set in 2008, never alludes to 2016 (as Hnath observed, “The audience is going to bring that into the room anyway”), but as 2020 looms, the play’s core debate around the importance of likability versus experience feels all too timely. “History’s repeating itself – it’s crazy! The thing that scares me is this notion that we pick our leaders based on who would make the most interesting character in a story, or who makes the best SNL caricature. We’re casting our president.”

Director Joe Mantello agreed, noting that the women in the 2020 field are facing the same scrutiny as Hillary does in the play – and did in reality. “I think it’s is alive and speaking to us now in that way, that this really capable candidate is judged by a certain set of standards that the men just aren’t,” he said.

For his part, Mantello is intrigued by one presidential hopeful in particular: Pete Buttigieg. “There’s something about him that is so authentic, and the way that you combat a lying blowhard is by being your most authentic self,” he said. “I keep thinking: what’s Trump’s nasty little nickname gonna be for Mayor Pete? You can’t attack his masculinity, because one person served, and one person did not. You can’t attack his lack of experience. So, what do you go after? He’s unflappable!”

“So much of my job is about evaluating people’s behavior and finding the subtext, so I watch people in a very particular way,” Mantello added. When he watches Buttigieg, he said, “I just think, Wow. This guy’s the real deal.”