Tulsi Gabbard on Hillary Clinton: ‘This Is Not a Personal Spat Between Two Women’ 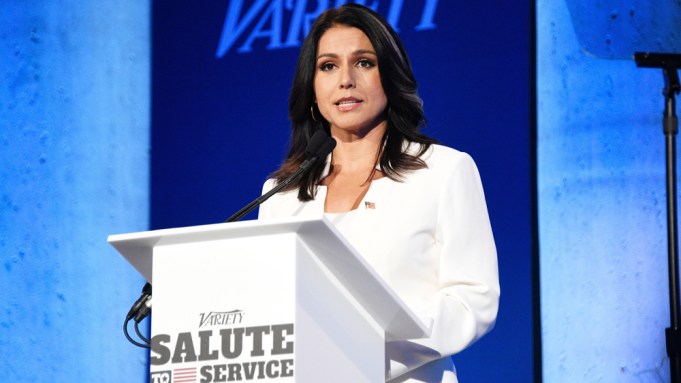 Fresh off of her headline-making appearance on “The View,” Rep. Tulsi Gabbard (D-Hawaii) headed straight to Variety’s Salute to Service luncheon presented by History, where she was honored, alongside other servicepeople and media figures who support veterans’ causes.

Before the luncheon, Gabbard spoke to Variety about the biggest issues facing the military, and why she believes her service positions her to be a strong candidate. During the wide-ranging interview, Gabbard also spoke about how she wants to rebuild the Democratic party, whether America is ready to elect a female president, her thoughts on Beto O’Rourke dropping out of the presidential race and the significance of Hillary Clinton suggesting that Russians were “grooming” her to be a third-party candidate.

“This is not a personal spat between two people or two women,” Gabbard told Variety when asked what she’s learned from her public tiff with Clinton, specifically as a woman in politics. “There’s a much bigger issue that’s being raised here, really about our foreign policy and the contrast of the Hillary Clinton legacy of foreign policy, which is very focused on interventionism, going around the world, being the world’s police, toppling dictators we don’t like, starting these regime-change wars. … Contrasting that with the foreign policy leadership that I seek to bring that would end this long-held regime-change war policy, work to end this new Cold War and arms race, and instead, lead with a foreign policy that’s focused on cooperation, rather than conflict; truly being that force for good in the world that the United States of America can and should be.”

Asked what she has to say to those who question whether she is going to stay in the Democratic race, Gabbard shot down, once again, any theories of her running a third-party campaign.

“Listen to what I’m saying. I mean what I say, and I say what I mean. The answer is no. I am not running a third-party candidate. I’m running to be the Democratic nominee because I’m the best candidate to defeat Trump,” she firmly stated.

Gabbard detailed how she wants to build a new Democratic party, if she were the candidate.

Gabbard believes the country is ready to elect a female president. She says thanks to her campaigning and seeing unity around the country, she feels hopeful.

“I really do,” she said when asked if America is ready to elect a woman in office. “And it’s because of the people that I’m connecting with in states like New Hampshire and Iowa and South Carolina. The states across the country that we’re seeing a coming-together, a coalition building amongst Democrats, Republicans, Independents, Libertarians, people of different races, ethnicities, religions, joining our campaign, resonating with the message of unifying our country, the leadership that will actually put the interest of people ahead of politics, ahead of profits, put the interest of the American people at the forefront of our leadership.”

“I am inspired and I am hopeful,” Gabbard continued, speaking of the unity she’s seen while she’s been campaigning. “And frankly, it’s this kind of coalition that’s necessary to defeat Donald Trump so that we can begin that wonderful path forward together toward a better and brighter future for everybody.”

As for the other candidates, Gabbard says she is not thinking of the competition, and repeated that she believes she is the most qualified to serve the country because of her understanding of national security and foreign policy. But she did reflect on her friend O’Rourke dropping out of the race.

“He’s a good friend. We got elected to Congress together back in 2012,” she said of O’Rourke. “I’m grateful for the passion that he brought to the race. I know him, and I know that he will find a way to continue to contribute and contribute to serve.”

Gabbard spoke to Variety at length about the biggest issues facing the military heading into 2020, given the premise of the Salute to Service luncheon, which was held at Cipriani Broadway in downtown Manhattan.

“They’re treated like crap,” Gabbard said about veterans. “Our leaders need to stop just paying lip service to our veterans, but actually do the work necessary that our veterans are taken care of.”

Gabbard said her experience serving is what motivated her to go to Congress and “be in a position where I could make decisions about our country’s national security and the issue of war and peace, and frankly, that’s why I’m running for president now, to be able to continue that commitment of protecting the safety, security and freedom of every American.”