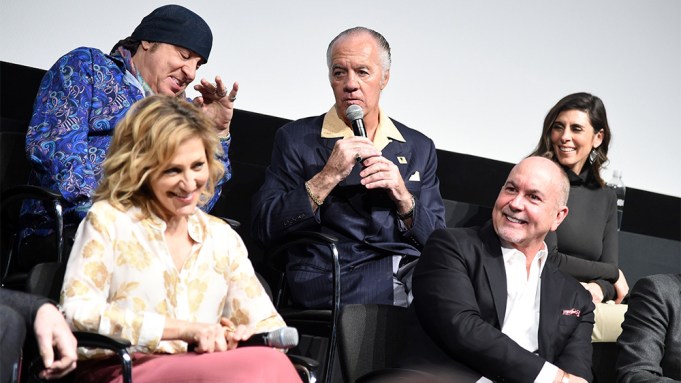 Jan. 9’s 20th anniversary reunion of the cast and producers of HBO’s “The Sopranos” was a raucous family gathering from its first moments. “I saw a picture of myself in the newspaper,” series creator David Chase said at the start of the event. “And I thought, 20 years. Jesus Christ.”

“People come up to me,” he went on, “and they say, thank you for the show, we really loved it, except for that ending.”

Cast members recounted their experiences of auditioning for the notoriously taciturn and difficult-to-read Chase, who’d incidentally produced a pilot script unlike anything else on the air.

“I don’t think this mother idea is going to work,” cast member Steven Van Zandt recalled thinking of Nancy Marchand’s Livia Soprano character. “I know a lot of Italian mothers, and I’ve never known a mother like this.” He later found out Livia was based on Chase’s own mother.

Misconceptions raged: Jamie-Lynn Sigler, cast as Tony’s daughter, recalled thinking the show dealt with opera. “I was a musical junkie, so I thought it was the show for me. And it was.” And Michael Imperioli — who said he’d had “better colonoscopies than auditions, and I haven’t had good colonoscopies” — noted that, after believing he blew his chance at the show, he convinced himself Chase didn’t understand the material. “Who cares anyway?” he recalled thinking. “This guy’s not even Italian; what does he know?” (Chase is, in fact, Italian.)

Cast members and producers made time, too, to reflect on series lead James Gandolfini, who died in 2013. Recalling the actor’s sensitivity during challenging scenes, Annabella Sciorra, given a mic in the audience, said: “Jimmy would say, I’m going to put my hand here now. Which is rare.” (Sciorra made news as one of Harvey Weinstein’s accusers, in alleged incidents taking place before “The Sopranos.”)

Though Chase recalled flirting with the idea of casting Van Zandt as the lead — “I thought maybe this could be a live-action ‘Simpsons,'” he said — all agreed that Gandolfini was the perfect Tony, as actor and as on-set leader. Edie Falco, his onscreen wife, noted that she spent little time with Gandolfini offset, allowing them to plunge easily into their performances. “What I loved so much about it is the differences were not so huge. Neither of us is really actor-y.” She recalled the show having been renewed for a second season: “I don’t know what the hell we just did,” Gandolfini told her, “but apparently we’ve got to do it again.”

All involved took part in the show’s stratospheric success, but few may have appreciated it more than writer and EP Matthew Weiner, who joined for its fifth season in what he recalled as “Survivor: Long Island City,” after the location of Silvercup Studios. (Executive producer Ilene Landress noted he was the only new writer hired that season to remain on board through its run; he went on to create “Mad Men” and “The Romanoffs.”) Having enviously witnessed the show’s success from afar, he said, “Part of why I was there was to remind them of what a big f—ing deal the show was.”

The show’s conclusion came in for undramatic dismissal by Chase: “I kind of felt like we were running out of stories.” He did, however, say he shared Falco’s experience, as the actress recalled finally breaking down as the last episode aired. (“I made a blubbering mess of myself,” she said.) Though the choice of a final song came in for debate — Van Zandt, a longtime member of Bruce Springsteen’s E Street Band, said “it was the longest fight we ever had, it lasted two weeks” — no one could dispute what Chase missed the most.

“The truth is, the people I got to know, and going to work and solving problems together, and having a place to go,” he said. “That’s what I missed. Nothing matched the smelly atmosphere of Silvercup.”