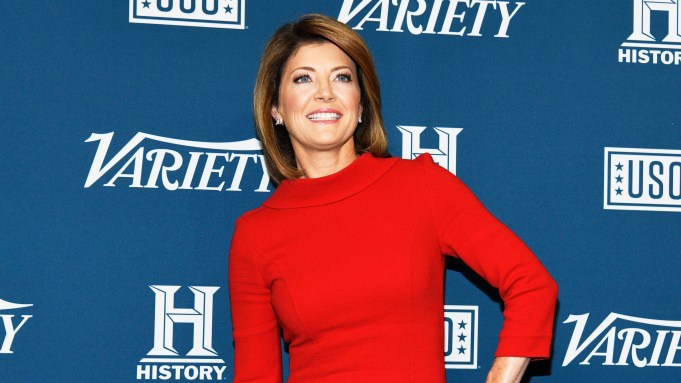 Variety’s Salute to Service luncheon presented by History, now in its third year, honors military veterans as well as those in the entertainment industry who use their platforms to support servicemen and women. The event was created by Gerry Byrne, Penske Media Corporation vice chairman and a U.S. Marine Corps veteran, who gave opening remarks.

The ceremony began with Mark Owen, the executive producer of the CBS drama “SEAL Team,” presenting the first award to Boreanaz. Owen, who served as a Navy SEAL for 14 years, approached CBS with the idea for a TV show about his experiences.

“I believe this is why the show resonates with so many veterans as we’re helping shed light on these real struggles our servicemen and women face,” Owen said.

When Boreanaz took the stage to accept his award, he called Owen his “brother” and “the heartbeat of the show.”

“I’ve been given the privilege of getting to know the real heroes in the military service by working side-by-side on screen with them as well as behind the scenes,” said Boreanaz.

Kenton Young, U.S. Air Force master sergeant and CBS News videographer, introduced O’Donnell, who he called “passionate about service and about telling stories of those who serve.”

When O’Donnell received the award, she spoke about her father who served for three decades as a doctor and commander in the U.S. Army. Her sister is also a colon and rectal surgeon in the military, dealing “with a lot of a–holes,” O’Donnell joked. She recently launched “Profiles in Service” on “CBS This Morning,” a segment that highlights servicemen and women.

“We need to hire more veterans,” O’Donnell said. “We need to celebrate our veterans. We also need to tell more stories about our veterans. Each of these stories I do, I honestly have to keep myself from crying because I have never met in my life more honorable, more exceptional people than those that serve our country in this way.”

Charlotte Clymer, Human Rights Campaign press secretary and U.S. Army veteran, presented the next award to Phillips, a national spokesperson for organizations such as Veterans of Foreign Wars and the Veterans Administration. He has also worked with USO and Wounded Warrior Project, and has been the host of “An Officer and a Movie” for the Military Channel, which has been on the air since 2011.

Phillips gave his “unending, unwavering support” to those in the special forces who are part of the LGBTQ community. He urged everyone to give back to veterans.

“We owe them because the freedoms that we have, they pick up the tab, and they’ve done that for the entire history of our country,” Phillips said. “They deserve to eat out on us for a change. We need to buy them lunch and coffee and dessert.”

Wahlberg said: “I would sort of look at this award as a physical representation of what does matter and the acknowledgment that really matters to me is when somebody stops us on the street and they say, ‘Donnie, my dad was a veteran and so am I and we watched ‘Band of Brothers’ and thank you for getting it right.’”

Goei said he’d grown up in a military family. “My father was an officer in the Vietnam War and I was born on a military base in Germany,” he said. “This part of my brain has still given me from a very, very early age a deep understanding and appreciation for the commitment and the sacrifices made by members of the armed services.”

As for White, he said he’s honored to help the troops. “It was right after this last Winter Olympics that I had a phone call and I was invited to go on this USO tour over the holiday break and I jumped at the opportunity,” White said. “To say it was incredible is an understatement. To be on the ground with these incredible people face to face seeing what their lives are like, seeing their pain and struggles.”

McCain dedicated her award to her brothers, her brothers-in-law, her sister-in-law and her niece, who are either veterans or currently serving in the military. In her speech, she said her father used to tell her that if you see someone in uniform, thank them for their service, buy them a drink or shot at the bar, or switch plane seats. She also said she has a flag in her dressing room on “The View” to remind her that what she does for a living, although important, does not compare to what her brothers endure in Afghanistan.

“It feels weird to me to accept this award simply because I think what I do is important obviously on some level, it’s very small compared to what our men and women in our armed services do every day,” McCain said.

Kathy Roth-Douquet, CEO of Blue Star Families, which currently represents serving military and their families, was the last presenter, giving 2020 presidential candidate, congresswoman and veteran Gabbard her award. Gabbard is the first female combat veteran to run for president.

Gabbard took the stage, saying that the attack on 9/11, “like so many Americans” changed her life. It inspired her to enlist in the military. She was first based in a camp north of Baghdad in 2005 and her “first task” was to go through a list of names of every American casualty and injury in the past 24 hours. She still serves as a major of the Army National Guard today. She expressed her anger toward politicians not taking action to help service members more.

“So as we approach Veterans Day on Veterans Day and every other day, I hope that we can all take this pledge to heart and as Americans as patriots as leaders and influences all across our country to honor our men and women in uniform, to make sure that no one is left behind,” Gabbard said.