Met Gala: Billy Porter Explains What Camp Means to Him 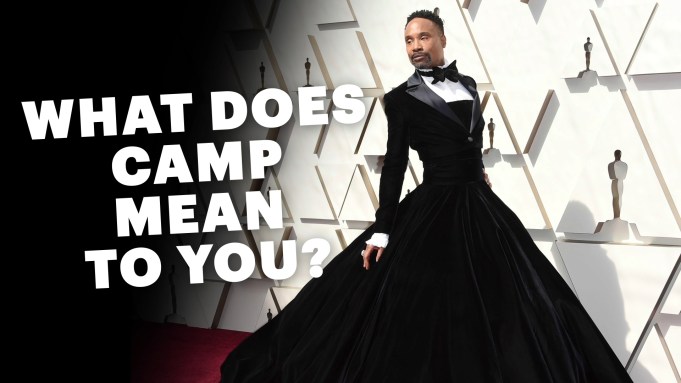 The 2019 Met Gala theme Camp: Notes On Fashion has set expectations record high. And with Lady Gaga teasing itty bitty purses and voluminous gowns online, the excitement is understandable. But what does camp truly mean? And how does one interpret something that isn’t really supposed to be deliberate? We asked the experts to weigh in.

“Camp means irreverence,” Broadway and “Pose” star Billy Porter explained to Variety. “Camp means as hugely over-the-top and grand and what some may feel is ridiculous and silly, and embracing all of those creative impulses inside us that very often are squelched.”

The Met Ball’s theme is a direct play on the famous “Notes on ‘Camp'” essay from Susan Sontag, who attempted to define that which cannot be pinned down. “I subscribe mostly to what Sontag said about camp,” said fashion critic Tom Fitzgerald of website Tom + Lorenzo. “In it’s purest form, camp is inadvertent. It is not deliberate — it’s how the audience receives something. Iit’s not how the person puts something out.”

Those in the know would argue that the Met Gala has always been camp, long before it announced this year’s motif. “What was campier than Kim Kardashian at the Met Gala in the Givenchy where everyone said she looked like a couch?” Fitzgerald said. “They’ve already been serving us camp on the Met Gala red carpet, they’ve been doing it for decades.”

Then there’s Rihanna and her golden train that, “everybody said looked like an omelette” according to Fitzgerald. Then there’s Sarah Jessica Parker’s fire headdress from 2015, another camp staple from red carpets past.

While Fitzgerald isn’t super optimistic that all the celebs will embrace the full camp theme, “I don’t think actors and fashion people and celebrities generally understand what camp is. They’re the people who produce camp inadvertently — they’re not the people who can deliberate produce it.”

Though Met Gala MVP Rihanna reportedly isn’t attending this year, Fitzgerald said there’s a reason she’s one of the most iconic attendees of past years. “She is super high glamour, but there’s this knowing savviness and sense of humor, which is why she always aces the Met Gala carpet,” the critic said. “It’s not that she doesn’t take it seriously, she understands fashion and she takes it seriously, but there’s always this knowing wink underneath it.”

Why camp now? The creator and critics all seem to agree, it’s time for some fun in fashion.

“When I think of 2019 and the years preceding it, the words that come to mind are ‘dumpster fire.’ Heather Cocks of the Fug Girls explained via email. “The world right now could use as many glimmers of joy and irreverence and showmanship as it can find, and I hope this event is a real celebration.”

“If nothing else, I think making camp the Met Gala theme is an excellent way for Anna Wintour and Co. to insure that people will show up wearing something joyfully outrageous, and that’s welcome for everyone right now,” Fug Girls co-creator Jessica Morgan agreed.

“We need a little bit of joy and we need to not take ourselves so seriously all the time,” Porter explained. “Everybody needs to laugh and camp facilitates that emotion.”

So what can we expect from Mr. Porter’s camp look? Three words: “Diana Ross, ‘Mahogany.’”