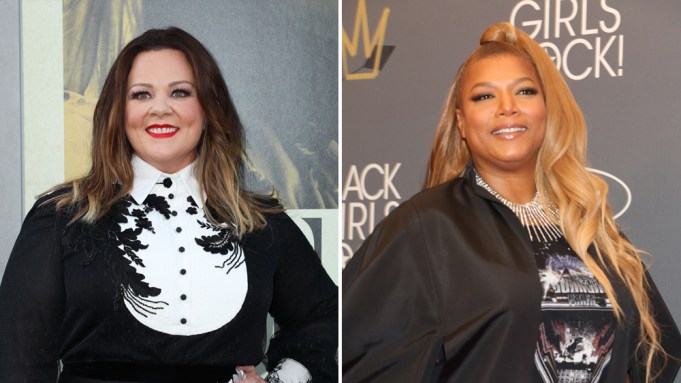 The only thing better than Melissa McCarthy portraying Ursula in “The Little Mermaid”? McCarthy and Queen Latifah playing the evil sea witch.

While McCarthy is reportedly taking on the role for Disney’s live-action movie, ABC announced Monday that Latifah will star as the notorious villain in the network’s television production “The Little Mermaid Live!” The singer will appear alongside “Moana” actress Auli’i Cravalho as Ariel and Shaggy as the crab Sebastian.

At the premiere for McCarthy’s upcoming mob drama “The Kitchen,” the Oscar-nominee revealed that she’s all in for the rapper’s take on the character.

“She can do anything,” McCarthy told Variety at the TCL Chinese Theatre on Monday night. “I’ll be like (raises hands) both hands on chin watching her.”

And since both stars may soon sing “Poor Unfortunate Souls,” Variety suggested a duet. McCarthy played coy in response, saying “What do you mean? Oh, I don’t know…” with a teasing smile and shrug.

Before continuing down the red carpet, McCarthy gushed over the vocal powerhouse. “‘Ladies First’ — that’s all I’ll say. I love Queen Latifah so much, “McCarthy said, referencing Latifah’s 1989 hit. “I still have the cassette tape of ‘Ladies First.’ Cassette…does that date me?”

ABC’s special is set to air on Nov. 5, and will feature music from the animated classic and Broadway version, both composed by Alan Menken. Meanwhile, Rob Marshall is directing the movie with McCarthy, which features Halle Bailey as Ariel.

While the ink may not be dry on her deal to play the iconic villain, McCarthy is portraying a kind of hero in “The Kitchen,” as mob wife turned boss named Kathy Brennan. The film, set in 1978 in New York’s Hell’s Kitchen, is an adaptation of a DC Vertigo comic book series and tells the story of three women (Tiffany Haddish and Elisabeth Moss co-star) who take the mafia business into their own hands after their husbands go to prison. And though the role technically puts the star in the DC comic book realm, McCarthy feels like she’s played a superhero already.

“I don’t think you have to have a cape to be remarkable. I mean, I love superhero stuff and I love comics, but…I’m someone who roots for like the average person doing remarkable things,” she explained. “That’s the most powerful thing you can be.”