Continue to Variety SKIP AD
You will be redirected back to your article in seconds
Nov 15, 2019 1:36pm PT 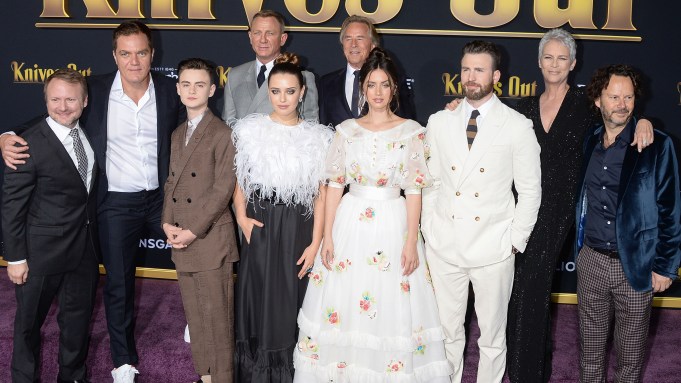 Sharp, current political and social satire lies at the heart of Lionsgate’s “Knives Out,” a darkly comedic whodunnit that often aims to upend Hollywood’s cultural conventions.

One key player in the shift is Ana de Armas, who portrays a caretaker for Christopher Plummer’s character in the film. With a fully formed, fleshed-out character, de Armas sees roles such as hers as uncommon, she told Variety at Thursday’s “Knives Out” premiere in Westwood, Calif.

“These characters don’t exist. They’re rare. It’s just almost impossible to see – or at least the previous Latina, Spanish-speaking parts that I’ve seen before, they’ve really not necessarily had the best qualities or possibilities,” de Armas said. “Or they don’t really reflect our community or our strengths. Definitely in this set of a wealthy family, that’s not a character that you can even imagine succeeding and getting out of the whole situation well. So, I was just happy to read something so surprising and positive and new and fresh.”

De Armas’ character, Marta Cabrera, spends considerable time with Plummer’s patriarch, when many of his blood relatives, including Chris Evans as Plummer’s jerky grandson, are too self-absorbed.

“There is this very funny running joke about where Marta is from. Everybody in the family claims a different heritage for her, which is a horrible thing to do. Do you know what I mean?” Curtis said. “It’s done in a kind of loving way, but the truth of the matter, it’s a terrible thing to do to someone. It just talks about that very dismissive part of her heritage.”

Timeliness fast-tracked the movie for director Rian Johnson, he said.

“The thing started with wanting to do an Agatha Christie-style mystery, but the thing that really got me rolling with it was, let’s set it in America in 2019,” Johnson told Variety. “That means we openly talk about a lot of the stuff that we’re talking about today. That means when the family has a few glasses of wine, they argue about the stuff we’re all arguing about with our family after a few glasses of wine. Hopefully, in a way where we can all go see it and kind of laugh at ourselves a little bit.”

Also making an appearance is a Southern accent from Daniel Craig, who plays a detective, Benoit Blanc. For the English-born Craig, picking up the American Southern accent was his own unique interpretation of the character Johnson wrote in the script, he said.

“Literally, there is a line that says Benoit Blanc and then something like, has the subtlest and silkiest of Southern accents,” Craig, who based Blanc’s speech style on Southern historian Shelby Foote, told Variety. “So, I ignored that and did what I did.”

Craig wrapped in October his fifth James Bond film, “No Time to Die,” and the 25th in the series. When asked about his post-James Bond life, Craig – who has indicated, but not confirmed, this might be his last turn as Bond – said he’s still busy with various aspects of “No Time to Die.”

A loving tribute was created by M. Emmet Walsh, who stepped in last minute to play a small role that was to be played by Ricky Jay, who died last November, while the film was in production.

“I replaced this wonderful actor and magician,” Walsh told Variety of Jay. “Ricky Jay was going to do it, and he went and died. Then they had to come and get somebody that wasn’t as good. So, they got me. … I’m brought in because they can’t get who they want. That’s normally the way I get hired. I work cheap, must be.”