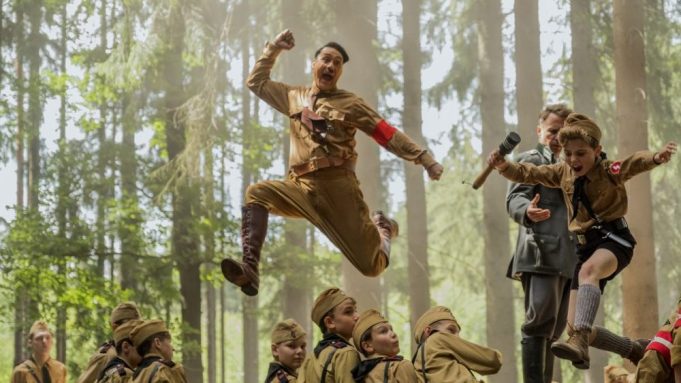 With its comedic, cartoonish portrayal of Nazis, Taika Waititi’s satirical Hitler youth tale “Jojo Rabbit” has polarized critics and audiences alike. And that division continued to be stirred at Tuesday night’s screening of the film at the Museum of Tolerance in Los Angeles, where Liebe Geft, director of the museum, moderated a heated panel discussion with Rick Trank, Oscar-winning producer of the 1997 documentary “The Long Way Home,” Claudia Wiedeman, director of education at the USC Shoah Foundation, and Brian Levin, director of the Center for the Study of Hate & Extremism and professor of criminal justice at California State University, San Bernardino.

Trank, who watched the film twice, he said, once on his computer in the privacy of his office and then with the Museum of Tolerance audience, “felt very disconnected” from the movie. He said he worried that without proper historical context, “JoJo Rabbit” could prove detrimental in terms of it not providing audiences — especially the adolescent market — an accurate, authentic recounting of the horrors of the Holocaust.

“While the intentions are very admirable … I’m a guy of a certain age, so I’ve studied this, it’s been my profession. I grew up with the Shoah in my family, it’s not theoretical to me,” Trank said. “I’m worried about the generation of grandchildren, should I be lucky enough to have them, and their friends and what they’re learning. My concern about this movie is when a younger person who isn’t as knowledgeable or who doesn’t really understand, [who] doesn’t know about the Second World War, doesn’t have really any connection to the Shoah, they see something like this and they see kind of a madcap wacky Hitler and these madcap kind of wacky Nazis, what are they walking away with? Even though in the movie the madcap wacky Hitler gets to be very scary to this little boy at the end, there’s other elements in there, I have some concerns about.”

Conversely, Wiedeman proffered that, given the right classroom structure and learning tools, Waititi’s film could serve as a useful entree into the world of Holocaust education for members of the younger generation.

“With satire, the challenge is balancing the absurd with the real,” Wiedeman said. “A film like this, or really any film for that matter, that’s used in the educational space, is not really educational material, yet, unless it’s surrounded by historical context to help support students’ understanding of what they are seeing. In the times we are in right now, the need for media literacy, the ability to critically understand messages coming at you, is an act of citizenship. So we can use a film like this well, safely in and safely out, as we say in the field of Holocaust education, and we can do that when we surround it with really powerful materials and we at the Shoah Foundation will do that through the use of survivor testimony. And with 52,000 survivor testimonies, almost a thousand of which mention Hitler youth, we can create that entryway into the history.”

Levin related FBI’s most up-to-date release of hate crime figures in the United States — and Jews are a primary target — to stress the urgency of stoking conversation about the Holocaust in a way that speaks to today’s youth.

“JoJo Rabbit,” he opined, can do just that.

“Hate doesn’t start with the devil, it’s starts with something more banal,” Levin said. “And one of the things that’s taking place right now is that we have to get young people to a place where they will watch the serious documentaries, where they will have some historic and civic literacy. And I think today we live in a world where young people, where sarcasm is part of their language, is part of how they get acquainted with each other. So I think part of the debate or the divergence that we’re having here today relates to: in what context will a film like this be presented? Will it stand on its own completely and will it have some kind of cartoonish contact with the Holocaust and Naziism? Or will it serve as an entry where we are talking in a language and tempo to today’s youth? And that’s where I think this film has done incredibly well.”