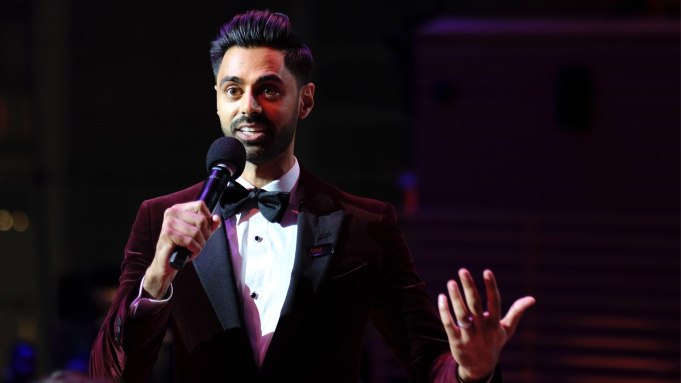 Jared Kushner was a surprise guest at Tuesday night’s annual Time 100 gala. The senior adviser to his father-in-law, president Donald Trump, got a surprise roasting from comedian Hasan Minhaj, who called out Kushner for human rights in Saudi Arabia.

The host of Netflix’s “Patriot Act with Hasan Minhaj” — one of the hundred most influential people honored by Time magazine this year across entertainment, arts, journalism, activism, politics, sports, and more — was selected to make a toast at the exclusive soiree, held at the swanky Lincoln Center in New York City.

“There are people on the front lines that cannot be here, like Loujain al-Hathloul, who is a Saudi activist who helped fight to lift the women’s driving ban, and she is currently in prison. She cannot be with us here tonight. She has been tortured,” Minhaj said of al-Hathloul, who is one of Time magazine’s 100 honorees this year.

Without mentioning Kushner by name, Minhaj continued his monologue in the pin-drop quiet room where you could certainly feel a bit of awkward tension.

“I know there’s a lot of very powerful people here,” the comedian said. “It would be crazy if there was a high-ranking official in the White House that could WhatsApp MBS and say, ‘Hey, maybe you could help that person get out of prison because they don’t deserve it,’ but that would be crazy. That would be — that person would have to be in the room, but that’s just a good comedy premise.”

Kushner, seated at a prime table in the intimate venue, did not verbally respond, as Minhaj was on the stage.

Before the dinner, Minhaj spoke to Variety on the red carpet and did not shy away from calling out President Donald Trump (who was also on the Time 100 list) and Fox News host Laura Ingraham, who called him a “Trump hating comedian.” Asked about his thoughts on Trump not attending the White House Correspondents Dinner for the third year in a row, Minhaj, who hosted the WHCD in 2017, said, “I think it’s a bummer…I was hoping he would attend. I just think it would be hilarious to watch him get roasted.”

Also on the red carpet, “NBC Nightly News” anchor Lester Holt spoke to Variety about popping up in the Mueller report, thanks to his infamous interview with Trump where the president spoke about firing former FBI director James Comey.

“It’s a piece of history,” Holt said. “We do what we do because we’re hoping that it makes an impact. Obviously, I wasn’t hoping for an outcome of this particular thing, but to see your work acknowledged in some form or fashion, I’ve looked at it a couple of times and at moments I’m like, ‘Wow, that’s bizarre that I’m in there,’ but I have to recognize that we work very hard to get significant interviews and to put light in dark places, and I guess this is an example of that.”

The gala kicked off with a four-song performance by honoree Khalid in front of the powerful room that included Taylor Swift, Dwayne “The Rock” Johnson, soccer player Mohamed Salah and Nancy Pelosi.

Khalid, who performed his hits “Location” and “Talk,” had anchor Norah O’Donnell dancing on her feet, while “Game of Thrones” alum Richard Madden was grooving at his table, seated next to Oscar-winner Rami Malek and Emilia Clarke. Most impressively, the 21-year-old musician attracted an A-list fan in Swift, who beamed from the stage, “If you haven’t listened to his album, that’s a huge loss” to which Khalid yelled back from across the room, “Thank you!”

During the dinner where guests noshed on a seasonal vegetable flight, beef filet, potato gratin, and Jane Walker by Johnnie Walker cocktails, Ryan Murphy was posing for photos with Naomi Campbell and Janet Mock. Fresh off of the “Avengers” premiere in L.A., Brie Larson was sipping on a glass of wine, while chatting with Swift, who also took a selfie with Trevor Noah, Glenn Close and “CBS This Morning’s” Gayle King. King was also schmoozing around the room, notably chatting for a few moments with Kushner — prior to his Minhaj shoutout.

Ressa, founder of the Philippines news website Rappler, mused about hope, inspiration and human nature. “My only crime is to be a journalist. To speak truth to power,” said Ressa, who’s been arrested twice in recent months, following her extensive reporting on Philippines President Rodrigo Duterte.

Oh took a moment not only to thank her mother and “all the immigrant mothers,” but also Beyonce. “Ladies and gentlemen, I just watched Beyonce’s ‘Homecoming’ and mommy, I love you, but I’ve got to talk about Queen Bey.” The former “Grey’s Anatomy” star went on to praise the new Netflix documentary, calling it “an important piece of work.”

Johnson dedicated his toast to “those in the seats” — meaning the fans who sit in seats with big dreams and open eyes, whether it’s to watch a wrestling match or a film in a theater. “I’ve gone from that pimply kid to the cover of Time magazine. Holy s—!” he said. “I was running around with a pimply face and wide, big brown eyes and a really messed up afro. I’m half black and half Samoan, so trust me, my hair didn’t know what to do, so much so that between the ages of 9 and 11, everyone thought I was a little girl.”

On the carpet, Johnson gave an update on his political plans, after stating in 2017 that he’s considering running for president, and telling Variety that the realistic consideration would be 2024, given his busy slate of film and television projects. Asked if he’s still thinking about running for president in 2024, Johnson laughed, “I did? Was I drunk?” He then continued, “No, no, no, I was not. I just continue to quietly observe and just wait and we’ll see.”

The night ended with a five-song set by Swift, who captured the A-list audience of Julianne Moore, Martha Stewart, and Trevor Noah with a speech about the power of writing music, and performing her classics like “Love Story” and “Shake It Off.” With new music anticipated to be launched this Friday, Swift did not debut any new songs at the gala, but she was one of the first stars to arrive at the event and was working the entire room all night long.

At the after party, Me Too founder Tarana Burke was spotted in great spirits, and former Time 100 honoree Ronan Farrow and his mother Mia Farrow were chatting with HBO’s John Oliver.