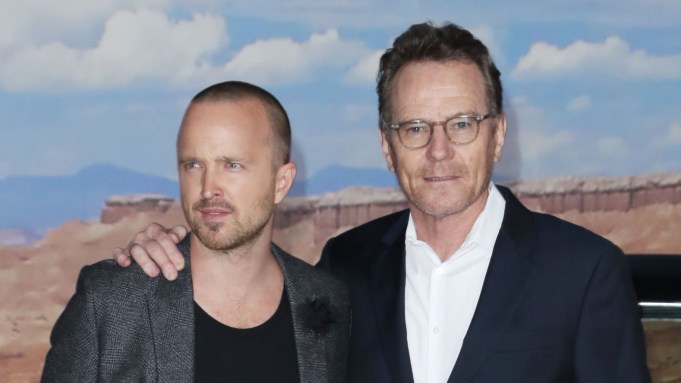 Six years have passed since fans said goodbye to Jesse Pinkman, but “El Camino: A ‘Breaking Bad’ Movie” has come knocking at the door.

“It was a family reunion of sorts. It was revisiting an old, dear, close friend of mine with zipping on Jesse Pinkman again. It was odd but very familiar,” star Aaron Paul told Variety at the premiere at the Regency Village Theatre on Monday.

Creator Vince Gilligan originally planned for AMC’s “Breaking Bad” to be a self-contained story, but he always wondered where Jesse ended up after the finale. The last time viewers saw him, Jesse was escaping the drug lab where he had been chained up and forced to cook crystal meth as a prisoner of the Aryan Brotherhood. “El Camino” picks up directly after the finale and sees Jesse hunted by the police.

“I’d like to believe he got away, and then I thought, ‘Well that’s up to the individual viewer to figure out.’ But then I thought, ‘Well, really, how did he get away? Or did he get busted around the corner?’” Gilligan told Variety. “It was that desire to revisit that portion of the story coupled with a desire to work with Aaron Paul again because he’s so much fun to work with and a tremendous actor.”

Jesse’s El Camino getaway car and the iconic RV in which he and Walter White (Bryan Cranston) cooked meth were parked on the film’s carpet on Monday, which was dressed to look like the Albuquerque, N.M., desert in which the show takes place. Fake police officers passed out wanted posters with Jesse’s face on them, and the crowd went nuts when the actor arrived to take photos and sign autographs.

Like many of his co-stars, Paul got his big break with “Breaking Bad.” He won three Emmys for supporting drama actor out of the show’s 16 wins throughout its run.

“What Vince and the rest of the writers did with ‘Breaking Bad’ was pitch perfect. I think they really nailed the landing with the ending. If you trust Vince, then you’ll trust him with this film. And I think what he does with this film is also pitch perfect,” he told Variety. “It’s an honest next chapter in this guy’s life and I think he did a beautiful job with it.“

Betsy Brandt, who played Walter’s sister-in-law Marie Schrader, revealed that it wasn’t all easy when the series began. Some businesses didn’t want the show to film on their property since it was about drugs, and even the cast was skeptical it would be resonate with viewers.

“Who knew that this drug show would bring people together?” she said to Variety. “The third season, we called it ‘The little show that could.’ We really had no idea what was going to happen and how many people would tune in or really care.”

It turned out, a lot of people really cared about the show. So many critics and fans alike loved “Breaking Bad” that Guinness World Records named it the highest-rated TV series in 2014. The success of the show has already garnered a prequel series with “Better Call Saul,” but Walter Jr. actor RJ Mitte said it was “inevitable” that a sequel would come out.

As for more stories set in the “Breaking Bad” world, Gilligan said he’d have to move on to something brand new so he doesn’t “overstay [his] welcome,” but also added that he’d “never say never.” However, Matt L. Jones, who played Jesse’s stoner buddy Badger, already has an idea for him and his pal Skinny Pete (Charles Baker).

“It’d be really cool to revisit Badger and Skinny Pete 20 years down the line. Screws loose, we’re in an old folks home,” he told Variety. “Lots of regrets, like ‘Space Cowboys’ or something like that.”