Ariadne Getty Honored as Variety’s Philanthropist of the Year 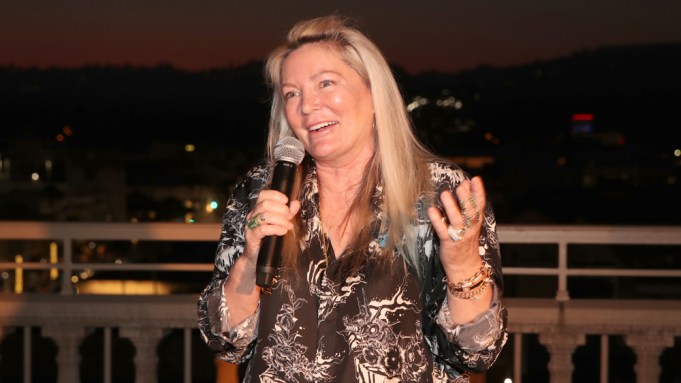 Ariadne Getty doesn’t like being in the spotlight. While her foundation has donated millions of dollars to charities and causes since launching 15 years ago, the oil heiress is reluctant to accept praise or fame for her work.

Even so, she was on hand on Tuesday night when Variety named her philanthropist of the year during a swank cocktail reception and dinner at the Montage in Beverly Hills. Before being presented with the award by the magazine’s editor-in-chief Claudia Eller, Getty was recognized for her work on behalf of the Los Angeles LGBT Center as well as GLAAD.

“All of us at the LGBT Center are eternally grateful to Ari and for all the work she has made possible and all the lives that she has improved,” the center’s CEO Lorri E. Jean said. “Ariadne Getty has spent a lifetime giving generously to causes she cares deeply about. We would be here all night if we talked about all of the important work her extraordinary generosity over the many decades has made possible here in Los Angeles, across the county and around the world.”

“She gives with her heart, as Lorri Jean said, with no strings attached,” Ellis said. “When you’re trying to raise money and find work, Ari trusts the leadership of that work and doesn’t try to micromanage it and that’s a really big deal for leaders in a movement because a lot of people give money but there are a lot of strings attached and you have to do certain things. Ari gives you money because she believes in what you’re doing and that is a huge vote of confidence.”

She went onto say that she didn’t feel like she deserved the award because “this is what happens when you make friends who are doing important work and you have the ability [to help]. It’s all about the people who bring the work to you.”

Getty promised to live up to being philanthropist of the year: “I’ll continue to do my best to make the differences that I can.”