America Ferrera Blasts ‘Send Her Back’ Chant: ‘Embarrassing and Shameful’ 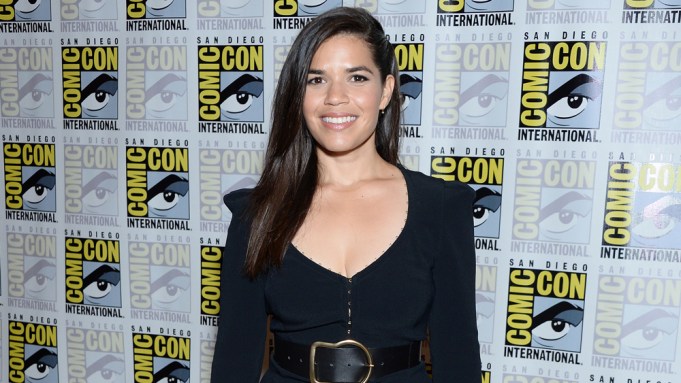 America Ferrera has been a longtime political activist who has focused a large part of her work on immigrant rights.

She’s now speaking out about the chant of “send her back” targeting Democratic Rep. Ilhan Omar that was shouted at a President Donald Trump rally earlier this week.

“It’s devastating and shocking and embarrassing and shameful,” Ferrera told Variety at Comic-Con, where she participated in a panel for her NBC comedy “Superstore.”

But the Emmy winner isn’t that surprised by race-baiting politics.

“All of these issues have been there under the surface and they’re boiling up and it’s really hard to face and look at,” Ferrera said. “But in order to solve the problem we have to be aware that the problem is there. I think we’re at a point where people are having to reckon with the reality of where we are at.”

“Superstore” addressed immigration last season when the character of Mateo (Nico Santos) gets detained by ICE agents because he is an undocumented immigrant from the Philippines.

Ferrera said show creator Justin Spitzer had been thinking of including the storyline for a number of years. “Justin saw the ICE raids a couple of seasons ago and was trying to figure out where to place it and how it feels natural and also where we find the humor in it, which is a hard one to pull humor out of…Mateo is complicated. We love him, we hate him, but we mostly love him and you’re laughing in the episode up until the unimaginable happens. So it’s been in the works and it’s been a conversation.”

The table read for the episode was emotional, with much of the cast left in tears. “I remember right after we finished reading that last page I looked over to my right and America and Lauren [Ash] had tears in their eyes,” Santos said.

Santos also recalled seeing castmates “sobbing” while filming the ICE scene. “I thought, nobody’s acting at this point,” he said. “This has become so real for us.”