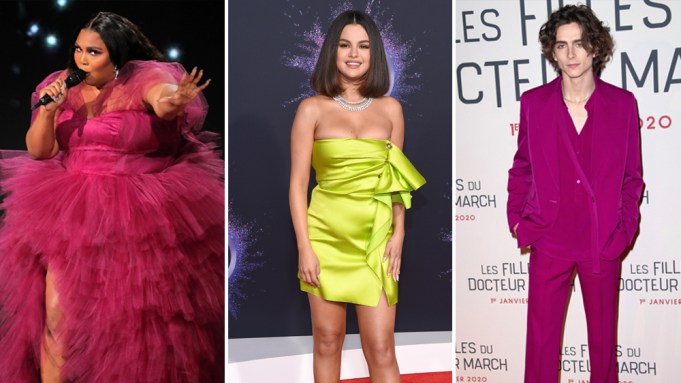 There is a palpable pre-awards show buzz in the air right now. The nominations have been released for the Golden Globes and SAG awards and celebrity stylists are working feverishly to secure the perfect looks for their star clientele. Picking the perfect look comes right on the heels of finding the perfect premiere and press tour ensembles for clients.

The timeline is compressed this year and for celebrity stylists, it can feel as though a giant hourglass of sand is emptying. For the most elite star stylists, gowns have been secured from various runway collections in advance of the frenzy, including the pre-fall 2020 runway shows that just took place. The first major red carpet is Jan. 5 at the Golden Globes, for many the most delicious fashion appetizer one could ask for to start off the new year. For the fashion engaged, this is the night we get a collective glimpse into the big fashion trends from the catwalk that will come alive in retail for the spring.

The style on the Golden Globes carpet is often a little more spirited and experimental than other award shows. Here are some trends that are likely to be seen strolling the carpets in the new year.

Green Sleeves
It’s all about having green sleeves! Although Pantone just made Classic Blue its 2020 color of the year, fashion designers have other plans. Shades of green have emerged in a profound way on the catwalks for spring 2020. The palette is expansive, including electric highlighter green, chartreuse, grasshopper, Kermit the frog, Kelly, seafoam and mint, just to name a few. The hue which is known to represent balance, harmony and growth feels like an auspicious shade to embrace as we begin the new year. It also feels symbolic because of the association with nature and the environment, one of the biggest global challenges for the new year. We’ve seen a saturation of green already at some of Hollywood’s biggest events, most memorably, Selena Gomez’s acid Versace number at the American Music Awards.

Pump up the Volume
This red carpet season will be all about blowing things out of proportion– especially where the skirt of one’s gown is concerned. Designers went big on bottom this season, playing with volume on a grand scale. The volume dress is 2020’s “princess” dress that we expect to find on just about any carpet. Yet, these newfound iterations combine scale with something profoundly sweet. In what looks like mountains of tulle, a fabrication that possesses an airy quality, a new kind of drama dress has emerged that feels in part overwhelming and at times ethereal. The look is more haute than hot, made for photo opps and standing only. The award for best drama might best be saved for this new larger-than-life dress moment. Lizzo’s onstage version at the AMA’s is the perfect example.

Take a Bow
A worthwhile red carpet gown should inspire conversation upon entering and exiting the room. The exaggerated bow is one of the fashion details du jour adorning the fronts and backs of several notable catwalk gowns. The effect can be quite dramatic depending on the placement. The redefined bow is an artful and expressive fashion exclamation point of sorts — not always the sweet and demure detail of previous versions. The size of the bow matters too this season — eyes are drawn to this new larger than life embellishment and the very deliberate locations in which they’re placed. Some hang fluidly down the back like a sash, while others sit neatly and architecturally at the back. The new bow is taking shape as a versatile embellishment that is always meant to be noticed.

The Colored Sequin Gown
There was such a abundant amount of head-to-toe colored sequin sparkle on the runways, it feels more is due to appear on carpets. The revitalized color palette coupled with newer interpretations such as long sleeves feels fresh and sophisticated.  Abandon any idea of sequin gowns from proms or vintage red carpets. The new sequins have been dipped in an expansive rainbow including shades of purple, blue, green, orange and yellow. Modern silhouettes like Laura Dern’s purple long sleeved Ralph Lauren gown, which she wore to the “Little Women” premiere on Dec. 7, is the perfect example. This look is sure to bring some added sparkle to the night.

Polka Dot Prints
Polka dot prints are emerging as a fashion story that’s on point. While this idea may be more limited in the context of a red carpet, it is a sure bet as one of spring 2020’s big fashion stories; you heard it here! Designers like Carolina Herrera and Jenny Packham showed us that polka dots do not always mean casual. When applied to a traditional gown, the polka dot can add a fresh sense of whimsy. The good news is that this trend will be easy to spot.

Technicolor Suiting
Surely nobody could have missed Timothee Chalamet’s fuschia suit last week at the “Little Women” premiere in Paris. Chalamet is most certainly a fashion designer’s dream. He can pull off trends with ease that might be ill advised for the rest of us. There is something undeniably powerful about committing to a bright color from head to toe in a classic suit. It’s clear that designers had strong conviction behind the look for spring; we saw it on the runways of Gucci, Balenciaga, Louis Vuitton, Acne and Alexander McQueen, to name a few. Women are also embracing the trend, but it looks especially fresh on the men. If donning the look head to toe seems like too much, we suspect actors will opt for a jacket in color — definitely more user friendly.