Trump Calls Out Jussie Smollett Over ‘Racist and Dangerous Comments’ 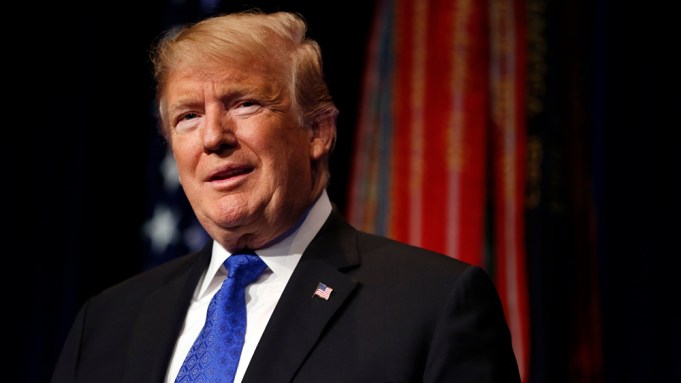 President Donald Trump weighed in on the arrest of Jussie Smollett Thursday, calling out the actor for “racist and dangerous comments.”

The “Empire” actor was taken into police custody Thursday morning on a charge of filing a false police report and disorderly conduct. During a press conference shortly after his arrest, Chicago police said Smollett set up a hate crime hoax because he was “dissatisfied with his salary” on the Fox show.

Trump addressed the incident on Twitter. He wrote, “@JussieSmollett — What about MAGA and the tens of millions of people you insulted with your racist and dangerous comments!? #MAGA.”

.@JussieSmollett – what about MAGA and the tens of millions of people you insulted with your racist and dangerous comments!? #MAGA

When Smollett initially reported the incident, he alleged that the attackers yelled “MAGA,” a reference to Trump’s campaign slogan “Make America Great Again.” Smollett also claimed his attackers poured bleach on him and put a noose around his neck.

On Jan. 31, Trump was asked about the alleged attack and said, “I can tell you that it’s horrible. It doesn’t get worse.” But his son, Donald Trump Jr., had been retweeting reports that cast doubt on Smollett’s claims.

In the initial days after Smollett alleged he had been attacked, a number of political figures, celebrities, and LGBTQ organizations spoke out in defense of the actor and musician. But the veracity of Smollett’s story was quickly questioned from some figures on the right, and in recent days a number of Trump supporters have called out Democrats, activists, and the media for a perceived rush to judgment.

Police now believe that Smollett paid the two men who attacked him to help orchestrate the assault. The brothers, Olabinjo Osundairo and Abimbola Osundairo, have been cooperating with investigators.

If Smollett is found guilty of falsifying a police report, he could face time in prison.

Chicago Mayor Rahm Emanuel issued a statement in which he praised the police for getting to “the bottom of what was reported as a hate crime,” but also noted the city’s shared values of tolerance. He said “a single individual who put their perceived self interest ahead of these shared principles will never trump Chicago’s collective spirit.”

According to CBS News, Emanuel had not commented extensively at the time Smollett first made his claims.

“The alleged statement of what happened her is horrific, and there’s no place for it in the city of Chicago,” Emanuel said.

Smollett had been an outspoken advocate for LGBTQ equality, and had been active in the Human Rights Campaign. On Jan. 29, as news of the alleged attack was reported on outlets around the country, HRC’s president, Chad Griffin, wrote on Twitter that he was “sick to my stomach” and urged quick and thorough action by law enforcement.

On Thursday, Griffin wrote that the news about Smollett’s arrest was “both devastating & frustrating. But I want to ask everyone feeling angry, hurt & disappointed to channel that into productive activism – because there are thousands targeted by hate violence each year who need our help.”

“The rising tide of hate violence has had a devastating impact on Black people, LGBTQ people, religious minorities & those living at the intersections,” he added. “At least 26 transgender people were killed in 2018 alone – and many were clearly bias motivated crimes.”