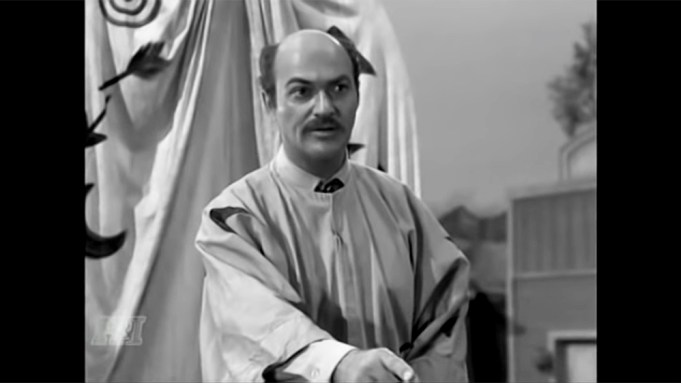 An episode of a 1950s Western drama may have foretold America’s current border wall crisis more than 60 years ago. Politics today and the show both feature men named Trump with a wall that is promised to protect every citizen from danger.

“Trackdown” aired on CBS between 1957 and 1959 and took place in Texas following the Civil War. The series followed Texas Ranger Hoby Gilman, played by Robert Culp, on his adventures protecting the people of the Lone Star State. The 30th episode of the show, titled “The End of The World,” premiered on May 9, 1958, and saw a con man named Walter Trump, played by Lawrence Dobkin, attempt to scam the entire town.

Snopes confirmed that the eerily prescient episode was real.

The fictional Trump warned the Texans that apocalyptic meteors would strike the town at midnight, but he could protect everyone. “I bring you a message,” he said. “A message few of you will be able to believe…but be not afraid my friends: I also bring you the means with which to save yourself.”

His solution was to build a wall made of magical metal that would repel the meteors and keep everyone safe. As the citizens started to believe Trump, he offered to give them walls for $50 each. However, Ranger Gilman wasn’t convinced. Pandemonium erupted in the town, but in the end Gilman arrests Trump for grand theft and fraud.

Even though “Trackdown” was a fictional show, the events of that episode closely mirror what is happening today. As today’s government shutdown enters its third week with no compromise on the Mexican border wall in sight, the country may be hoping for a Ranger Gilman of its own to bring an end to it.