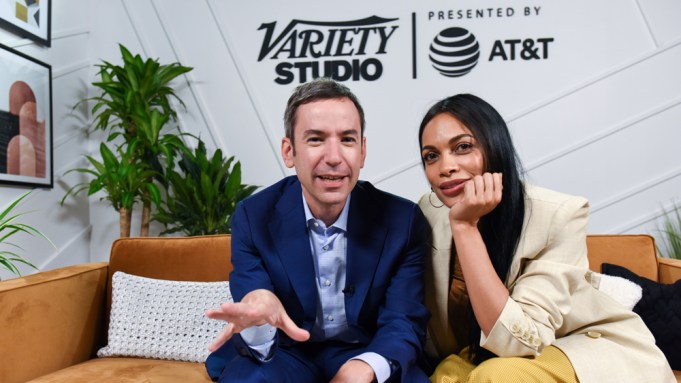 Rosario Dawson is dating two senators at the moment — one in her upcoming series “Briarpatch,” played by Enrique Murciano, the other in the midst of a presidential election, Cory Booker.

“I feel like I’m dating Captain America, I mean he’s just such an amazing, brilliant, kind, empathetic, beautiful, loving human being — Cory — and then this character has that as his sort of face,” she said at Variety‘s Toronto Film Festival studio presented by AT&T. “They could not be more different characters.”

In “Briarpatch,” Dawson plays an investigator working for an ambitious senator who returns to her hometown after her local detective sister is killed. What follows, is a mystery of corruption, embroiling Dawson’s character within the dark underbelly of the political world — a controversial story line that isn’t lost on Booker’s campaign team.

“It’s been really interesting just you know talking to him and talking to his staff about you know the premiere here,” Dawson said before joking about the show’s slight similarity to her dating life. “He’s a senator, he’s got his eyes on the presidency and he’s someone I work with, and we’re having an affair — otherwise there’s no similarities whatsoever.”

However, Dawson was also quick to point out some of the more serious issues that come with dating a presidential candidate in real life. Dawson, who will also be acting in the upcoming “Zombieland” sequel, revealed that she often faces a double standard when it comes to her relationship with Booker.

“He’s hoping to make the ‘Zombieland’ premiere, but I’m curious to see, if he doesn’t, if he’s going to get the same amount of press being like ‘why aren’t you supporting your woman,'” she said. “I’ve been getting all this press like ‘Why aren’t you at your man’s side’ when I’ve made it really clear that it’s okay to be a working mom.”

Dawson also clarified that she won’t be backing a specific candidate in the upcoming election cycle despite her personal connection to one of the candidates. What really matters, she said, is getting people out to vote.

“Regardless of Cory, I wasn’t going to be behind any particular candidate this election,” she said. “I really just want to be behind the electorate.”

“This election is really really critical,” she continued. “A lot of the themes that are touched on [in ‘Briarpatch’] are really, narratively critical for us to be talking about in a wider space so that people can come to the table and see where their position is and see where they can be active…We need all hands on decks.”