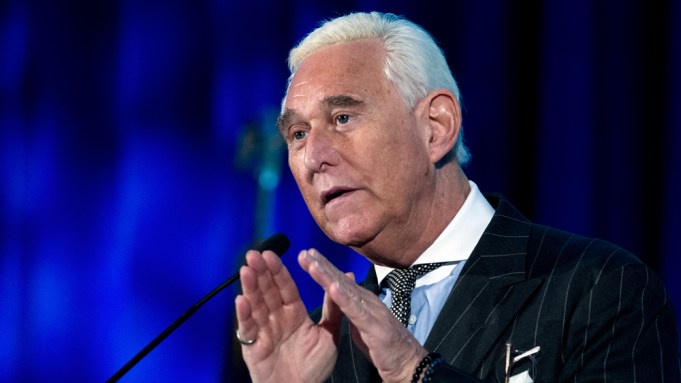 WASHINGTON — Roger Stone, the longtime associate and confidant to Donald Trump, was arrested on Friday in the latest indictment brought by special counsel Robert Mueller.

Stone is accused of misleading the House Intelligence Committee about his attempts to communicate with WikiLeaks during the 2016 presidential campaign. WikiLeaks released a trove of hacked emails from the Democratic National Committee and later from John Podesta, Hillary Clinton’s campaign chairman.

Stone was arrested in an early morning FBI raid that was captured by CNN.

The indictment charges Stone with one count of obstruction of proceeding, five counts of making false statements, and one count of witness tampering. He was arrested early on Friday at his home in Fort Lauderdale, Fla.

After their release on July 22, 2016, an unidentified senior campaign official was then “directed” to contact Stone about “any additional releases and what other damaging information” WikiLeaks had regarding the Clinton campaign, according to the indictment. Stone then told the Trump campaign about potential future releases of damaging information.

The indictment also claims that Stone was attempting to persuade a witness to give false testimony and withhold pertinent information. The indictment does not name the witness, but Stone had publicly identified him as Randy Credico, a radio host who had been in contact with WikiLeaks founder Julian Assange.

Stone’s indictment had long been expected. In September, in an interview with Variety’s “PopPolitics” on SiriusXM, he noted that Mueller had been interviewing many of his associates, but had yet to reach out to him, and said that it was “conceivable” that he would be a target of the special counsel.

Stone is notorious in the political world for his colorful persona and for his engagement in dirty tricks, chronicled in the 2017 Netflix documentary “Get Me Roger Stone.” He was one of the earliest, if not the earliest, to see Trump as a potential political figure, going back to the late 1970s, when he was introduced to the brash real estate developer by attorney Roy Cohn. A decade later, Stone advised Trump as he was considering a presidential bid, and even introduced him to former president Richard Nixon. Stone served as a junior scheduler on Nixon’s reelection campaign in 1972.

When Trump launched his campaign, Stone had an official role as an adviser, but after a falling out in the summer of 2015, he left in a campaign shakeup. Still, he had an informal role as an adviser and remained an ardent booster of Trump’s in media appearances and in his commentary on Alex Jones’ Infowars platform.

Mueller’s indictment claims that Stone was instrumental in alerting the Trump team that WikiLeaks had information that was damaging to Clinton.

The indictment claims that in or around June or July of 2016, Stone informed senior Trump campaign officials that he had information that WikiLeaks, identified in the court filing as “Organization 1,” “had documents whose release would be damaging to the Clinton campaign.”

The indictment also claims Stone corresponded with unidentified associates about contacting WikiLeaks “in order to obtain additional emails damaging to the Clinton Campaign.”

Stone, however, has insisted that his contacts with WikiLeaks and the anonymous persona Guccifer 2.0, which claims to have hacked the DNC, were either through an intermediary or were perfunctory.

He testified before the House Intelligence Committee on Sept. 26, 2017, in which he denied that he “knew in advance about, and predicted” the hacking of Podesta’s emails and that he had “advanced knowledge of the source or actual content.”

Mueller’s team says Stone made false and misleading statements to the committee about the nature of his attempts to contact WikiLeaks, including through an intermediary. They also contend that Stone falsely claimed that he never discussed those contacts with anyone involved in the Trump campaign.

In a public appearance on Aug. 8, 2016, Stone said he had “actually communicated with Assange,” and made a similar statement four days later. “I believe the next tranche of his documents pertain to the Clinton Foundation, but there’s no telling what the October surprise may be,” Stone said at one event.

According to the indictment, Stone told the Intelligence Committee that his contact with WikiLeaks actually had been an unidentified intermediary, later revealed as Credico. But Mueller’s team found that claim inconsistent.

“In truth and in fact, the first time [Credico] interviewed [Assange] was on or about August 25, 2016, after Stone made his August 8 and August 12, 2016 public statements,” the indictment stated.

In fact, Stone had been in contact earlier with conservative author Jerome Corsi about Assange, who has been in an Ecuadoran embassy in London.

On Aug. 2, 2016, for instance, Corsi emailed Stone, “Word is friend in embassy plans 2 more dumps. One shortly after I’m back [from a trip in Europe]. 2nd in Oct. Impact planned to be very damaging. Would not hurt to start suggesting HRC old, memory bad, has stroke — neither he nor she well. I expect that much of next dump focus, setting stage for [Clinton] Foundation debacle.”

He told the Intelligence Committee that Credico was his intermediary, and then urged Credico to “falsely confirm” this if brought before the committee. But Credico told him that such testimony was false. Stone then engaged in a “prolonged effort” to try to prevent Credico from contracting those statements, according to the indictment.

Among other things, Stone told Credico in December 2017, that he should do a “Frank Pentangeli” before the committee, referring to a character in “The Godfather: Part II.” That was a character “who testifies before a congressional committee and in that testimony claims not to know critical information that he does in fact know,” according to the indictment. Ultimately, Credico pleaded the fifth.

But the indictment claims that Stone made statements to try to prevent Credico from cooperating with the investigations. In an April 9, 2018, email to Credico, he wrote, “You are a rat. A stoolie. You backstab your friends-run your mouth my lawyers are dying Rip you to shreds.” According to prosecutors, Stone also said he would “take that dog away from you,” referring to Credico’s therapy dog, and later wrote, “I am so ready. Let’s get it on. Prepare to die [expletive].”

In one email on May 21, 2018, Credico wrote to Stone, “You should have just been honest with the house Intel committee … you’ve opened yourself up to perjury charges like an idiot.” Stone wrote back, “You are so full of [expletive]. You got nothing. Keep running your mouth and I’ll file a bar complaint against your friend,” referring to an attorney who had the ability to contact Assange.

Stone appeared in a Florida federal court on Friday morning, and was released on a $250,000 bond, according to CNN.

After his release, he called into Jones’ InfoWars and claimed that he was framed, before appearing outside the courthouse. At one point, he waved his arms in the air with his hands in victory signs, a gesture popularized by Nixon.

“I have told the truth in this entire proceeding, and I will prove that in a court of law,” said Stone, wearing a blue polo shirt. He said Mueller was engaged in a “political motivated” prosecution, and described himself as one of Trump’s “oldest friends” and a “fervent supporter” of the president’s.

He also seemed to relish the attention.

In his interview with Variety‘s “PopPolitics” in September, Stone said, even though a Mueller indictment may be forthcoming, “I can’t think of any circumstance under which I would be willing to testify against” Trump.

Stone’s attorney did not immediately return a request for comment.

White House press secretary Sarah Huckabee Sanders said on CNN that his indictment “has nothing to do with the president.”

Trump later wrote on Twitter, “Greatest Witch Hunt in the History of our Country! NO COLLUSION! Border Coyotes, Drug Dealers and Human Traffickers are treated better. Who alerted CNN to be there?”

Greta Van Susteren raised a similar question of how CNN’s cameras were trained on Stone’s Fort Lauderdale home as the raid was taking place.

CNN’s Jim Sciutto, however, responded to Susteren that “our reporters who cover this story everyday noticed unusual activity at Grand Jury and went to his home. That’s good journalism, which I know you respect. Not a tip. And anyone who covers Mueller knows Mueller’s office does not tip.”