Politics at the Oscars: A Statement Against Trump, Without Mentioning His Name 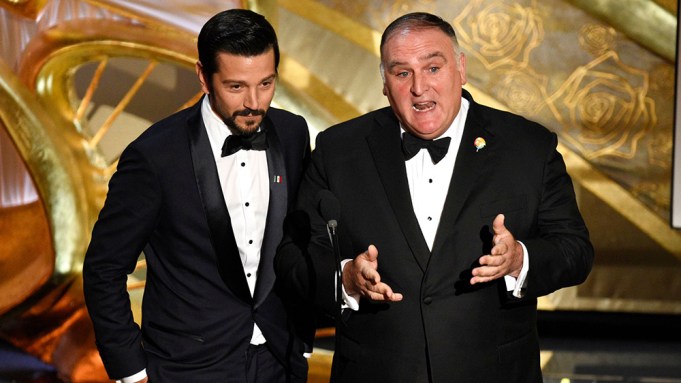 WASHINGTON — President Donald Trump early on Sunday promised an entertainment spectacular at the Lincoln Memorial on the Fourth of July, predicting that it will be “one of the biggest gatherings in the history of Washington, D.C.”

It’s a pretty good bet that it won’t resemble this year’s Oscar telecast, which played out like a response to Trump, his policies, and even his persona, even though his name wasn’t even mentioned.

“The 2020 presidential election is around the corner. Let’s all mobilize. Let’s all be on the right side of history,” said Spike Lee, who won his first Oscar for the screenplay to “BlacKkKlansman.” “Make the moral choice between love versus hate. Let’s do the right thing.”

Jose Andres, a Trump nemesis, joining with Diego Luna to introduce best picture nominee “Roma,” said the movie “reminds us of the understanding and compassion that we all owe to the invisible people in our lives — immigrants and women — who move humanity forward.”

“There are no borders or walls that can restrain ingenuity and talent,” said Javier Bardem as he presented best foreign language film, his words translated in English subtitles. “Roma” went on to become the first Mexican film to win the honor, and its director, Alfonso Cuaron, won best director.

The drama surrounding the ceremony, including a failed effort to find a host and often misguided attempts to trim the show, didn’t distract from the messages presented throughout the show. Best actor winner Rami Malek noted that Freddie Mercury was an immigrant, and that he was “the son of immigrants from Egypt, a first-generation American.”

Throughout the evening, it was all about breaking barriers — those of gender, those of race, those of international boundaries. As much as it reflected the political moment, the fact that there were a number of firsts in the evening likely will be seen as a sign of a shift in the mindset of some in the industry toward inclusion.

Ruth E. Carter, the first African-American to win for costume design, for “Black Panther,” said, “Thank you for honoring African royalty and the empowered way women can look and lead on screen.”

Cuaron said “Roma” “doesn’t exist if not for Mexico,” and thanked the Academy for recognizing a story that focuses on a domestic worker, “one of the 70 million people around the world without work rights, a character who has been historically relegated to the background.”

Absent a comedian as emcee, the Oscars skipped what has traditionally been prime time for political humor, the opening monologue.

Early on, though, Maya Rudolph, presenting along with Tina Fey and Amy Poehler, took a dig at the Academy’s foibles and at the president. “There’s no host, there won’t be a popular movie category, and Mexico is not paying for the wall.”

Toward the end of the evening, civil rights icon John Lewis got a standing ovation, and then “Green Book” won best picture. The moment conveyed the idea that the movie business, at its best, was on the right side of history.

But not everyone was seeing it that way. The victory of “Green Book” was very quickly dismissed on by detractors social media as a too tidy story from the Jim Crow era, too much vested in the idea of a “white savior.” Lee, speaking to the press backstage, criticized the choice and said, “I’m snake bit. Every time somebody’s driving somebody, I lose.” That was a reference to 1990, when he lost the screenplay Oscar to “Driving Miss Daisy.”

Meanwhile, the common refrain on the right has been that the Oscar ratings have fallen because the show has gotten too political, too topical, and too anti-Trump. Rudy Giuliani, his attorney, tweeted shortly after the telecast ended, “The modern Oscar show is marred every year by very little comedy and a lot of pontification and bloviating all in service of limousine liberalism.”

If the numbers are down again, we may even hear that argument from Trump himself. But he can’t be distracted for long.

As the Fourth of July approaches, he’s got his own show to produce.

Bob Hope made us laugh by laughing at Hollywood and laughing at himself. The modern Oscar show is marred every year by very little comedy and a lot of pontification and bloviating all in service of limousine liberalism. https://t.co/UpZl8YZvld