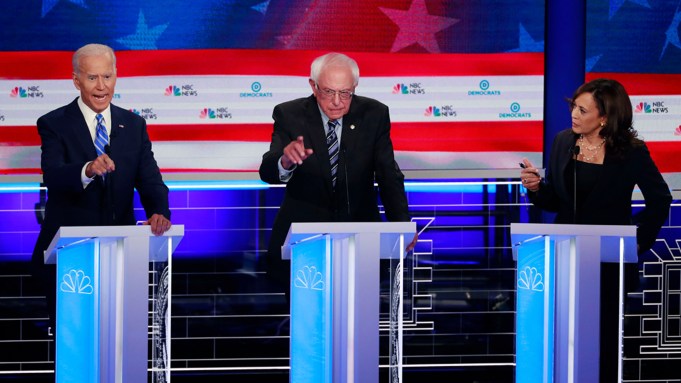 “It’s personal and it was hurtful to hear you talk about the reputations of two United States senators who built their reputations and career on the segregation of race in this country. It was not only that, but you also worked with them to oppose busing,” she said. “There was a little girl in California who was part of the second class to integrate her public schools and she was bused to school every day. That little girl was me. So I will tell you that on this subject, it cannot be an intellectual debate among Democrats. We have to take it seriously. We have to act swiftly.”

Harris was referring to Biden’s recent comments at a campaign fund-raiser, in which he noted that he had served with past democratic senators James O. Eastland and Herman Talmadge, both of whom who were staunch opponents of desegregation. She also highlighted Biden’s past opposition to school busing in the 1970s.

“It’s a characterization of my position across the board. I do not praise racists,” Biden responded, before taking aim at Harris in return.

“I was a public defender. I didn’t become a prosecutor,” he said in reference to Harris’ own prosecution record as San Francisco district attorney and California attorney general. “I left a good law firm to become a public defender when in fact my city was in flames because of the assassination of Dr. King.”

Harris fired back, challenging Biden to admit that he was wrong to oppose the issue of busing.

“Because your city government made that decision,” Biden replied. “It was a local decision.”

“So that’s where the federal government must step in,” Harris responded.