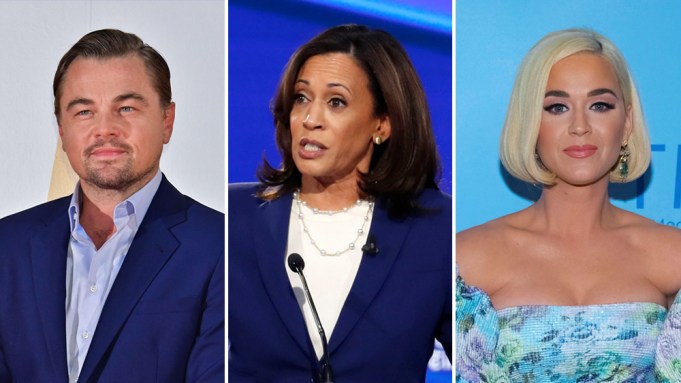 Kamala Harris is not leading in the polls or in fundraising. After a surge over the summer, following her first Democratic presidential debate performance, her campaign has steadily lost steam.

But Harris is still the favorite among Hollywood donors, who, for once, are following their hearts and ignoring the trends.

Harris has received more contributions from the entertainment industry than any other Democrat, according to the latest data from the Center for Responsive Politics. The freshman Democratic senator has raised $1.1 million from Hollywood, including $234,000 in the third quarter.

Harris is a known quantity in the entertainment industry, which has supported her as a candidate for state office three times.

Harris held another big-ticket event last Thursday, at the Brentwood home of Bad Robot executive Brian Weinstein. Among the co-hosts were J.J. Abrams, Donna Langley, and Nicole Avant. Gov. Gavin Newsom was also on hand for the event, which was targeted for protest by the climate change activism group Extinction Rebellion.

According to her latest contribution report, Harris has received $2,800 apiece from Steven Spielberg, Kate Capshaw, Jason Blum, and Bette Midler. She has also received $5,600 — the individual maximum for the primary and general elections — from Leonardo DiCaprio, Katy Perry, Ariana Grande, Anthony Anderson, and “Simpsons” writer Mike Scully. She also got $5,000 from Alfre Woodard, and $1,000 apiece from producer Gale Anne Hurd and soccer star Megan Rapinoe.

“I definitely think her strategy has been around ‘raise, raise, raise,’ and to build power in that way,” said Hannah Linkenhoker, senior political strategist at ICM Partners.

The dollar figures are still relatively small at this stage, as none of the Democratic candidates has consented to having supporters form a super PAC, which could raise unlimited funds. That could change in the coming weeks, as the Biden campaign has signaled its openness to it.

Biden had a lackluster quarter, raising just $130,000 in Hollywood — including support from Paramount chief Jim Gianopulos, Disney TV studio chairman Dana Walden, and Legendary CEO Josh Grode — bringing his Hollywood total to $478,000. He raised $15.2 million overall for the quarter, but had only $8.9 million in the bank, well behind his principal competitors.

Sen. Bernie Sanders and Sen. Elizabeth Warren, meanwhile, are not holding big-ticket fundraisers at all, yet they were still about even with Biden in Hollywood money for the quarter, with Sanders picking up $147,000 and Warren $126,000. Only a handful of Hollywood notables gave to either of them. Giving to Sanders were Mark Ruffalo, Rhea Perlman, Tom Ortenberg and Jan De Bont. John Legend, Chelsea Peretti, Rosie O’Donnell, Steve Bing, Perlman, and Dan Castellaneta gave to Warren. Sanders has raised $606,000 from people in the entertainment industry so far, while Warren has $439,000, according to the CRP data.

So far, exclusive fundraisers have been less important than mobilizing hundreds of thousands of small-dollar contributors. But mega-donors may see their clout quickly restored if super PACs begin to form. The Sanders and Warren campaigns sent emails to supporters last week decrying Biden’s signals on the issue.

“Bernie doesn’t have a super PAC and he doesn’t want one,” wrote campaign manager Faiz Shakir. “He is not going to be controlled by a handful of wealthy people in this country.”

Trump does not have many supporters in Hollywood, but the ones he does have write big checks. Brock Pierce, the former child actor who is now a bitcoin entrepreneur, gave $91,100 to Trump’s campaign, the Trump Victory Committee, and the Republican National Committee. Burt Sugarman, the former TV producer and husband of Mary Hart, also gave $91,100 to those committees.

Also among his top supporters is Anna Oproglou, a former B-movie actress who still does occasional commercial work.

“I know why they hate Trump — I think it’s envy,” she told Variety last week. “I believe he wants the best for the country, and he will be remembered as one of America’s best presidents ever.”

She added that the impeachment is based on “vicious lies from the Democrats.” She said she mostly keeps her views to herself, knowing Trump is not popular in Hollywood.