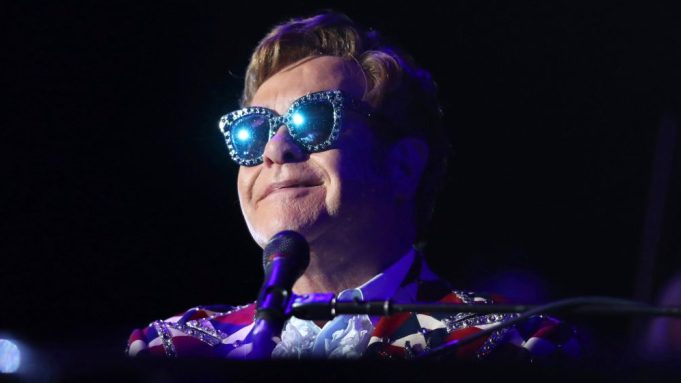 Elton John’s long victory lap — which has included an international farewell tour, an outrageously candid new memoir and a spangled biopic about his life — continued Thursday night under a cool night sky at the Greek Theater … eight miles and almost 50 years east of the Troubadour, where his pop reign began in 1970.

A screening of “Rocketman,” director Dexter Fletcher’s summer blockbuster starring Taron Egerton as Captain Fantastic, was accompanied by live orchestra and rock band. The Captain himself, joined by Egerton, capped it off with a brief performance.

Movies with live score accompaniment have become a dime a dozen. Some naturally lend themselves to the treatment — most John Williams scores were born for the concert stage — while others are more of a reach. Musicals, while presenting the additional high-wire act of syncing up with pre-recorded vocals, make as much sense as anything, and “Rocketman” is the most current film to join the trend on the heels of concert presentations of Disney classics (“The Little Mermaid”) and recent fare like “La La Land.”

The “Hollywood Symphony Orchestra,” a loose term for an ensemble of contract musicians who often play on film recording sessions in town, brought cinematic sweep to Giles Martin’s inventive new arrangements of the film’s catalogue of John songs, along with Matthew Margeson’s affecting score. They played so well and so in sync, in fact, that it was easy to forget they were there — one of the ironic downsides to these events.

One of the ways “Rocketman” distinguished itself from other rock biopics, most pointedly “Bohemian Rhapsody,” was by completely reimagining its jukebox of classic songs. Martin had done something similar with Beatles songs in the Cirque du Soleil show “Love,” and John (an executive producer on the film) gave him free rein.

Even though these new versions feature a fair amount of studio-bound production that wasn’t replicated at the Greek — an angelic chorus in “Crocodile Rock,” spacey electronics in “Rocket Man” — they worked quite well in live performance. Other than a missing (or perhaps buried) guitar intro for Martin’s folksy take on “Tiny Dancer,” and a more pedestrian reading of his Indian-flavored interlude in “Saturday Night’s Alright (For Fighting),” the songs mostly sounded great. The band and orchestra matched up with the film’s pre-recorded vocals without a hiccup.

Of course, the greatest sin playing rock ’n roll music would be to play it square, and these musicians had to perform to a meticulously mapped-out grid. But they rocked and grooved with gusto, and none of the soundtrack’s toe-tapping, singalong vim was lost in translation.

Dynamics were occasionally an issue, as usual with these types of concerts. Vocals were drowned out by the orchestra at times, as were a few lines of dialogue.

Before the show started, Fletcher gave a short introduction (stiffly stuck to a Teleprompter script), and said: “I’ve been told to encourage you to clap and cheer and sing along, so don’t be afraid.” But the crowd, decked out in Elton-inspired garb, seemed shy to raise voices in song. If anyone did, they did so quietly. They weren’t shy, however, about cheering their hero and jeering his snaky manager, John Reid. They roared at the sight of the Hollywood sign, got rowdy during the first sex scene (“Get it baby!” one person shouted) and whooped at every spoken affirmation of sexual freedom and self-love.

Part of what makes these live, communal screenings so much fun is being surrounded by other humans — but then, they’re also the reason it can be more appealing to watch a movie like “Rocketman” at home on Blu-ray. Other humans mean loud whispering during intimate dialogue scenes and the pungent stink of weed.

Still, with a gorgeous moon hovering over the Greek’s shell and a cool wind animating the air, it was a fun way to experience this literally fantastic portrait of one of the greatest living songwriters. And when Elton John walked onstage after the film ended — wearing big sunglasses and a bedazzled leopard-esque jacket — it was like Tom Baxter walking off the screen in “The Purple Rose of Cairo.”

Sitting on stools side by side and occasionally holding hands, John and Egerton sang the film’s one original number, “(I’m Gonna) Love Me Again.” Despite the poetic lyrics, it’s definitely lesser late-Elton, and by far the weakest link in the film’s delightful soundtrack. Fletcher came back on stage and brought out Bernie Taupin (“This movie and everybody involved in it just solidifies for me what it means to have spent the last 50 years of my life with this man,” Taupin said), then Giles Martin, Jamie Bell (who portrayed Taupin in the film) and Bryce Dallas Howard, who played John’s imperfect mum.

“This has been the greatest creative episode in my life,” said the 29-year-old Egerton, who added that he’s performed a number of times with John now, but there was one song they’d never done live. Then John went to the piano, and they duetted on “Don’t Let the Sun Go Down on Me.”

Elton John, with his now much huskier baritone, sounded terrific. And even though he’s been saying a lot of goodbyes lately,  perhaps — as Taupin claimed — they’re “just getting started.”