TV Review: ‘Aretha! A Grammy Celebration for the Queen of Soul’ 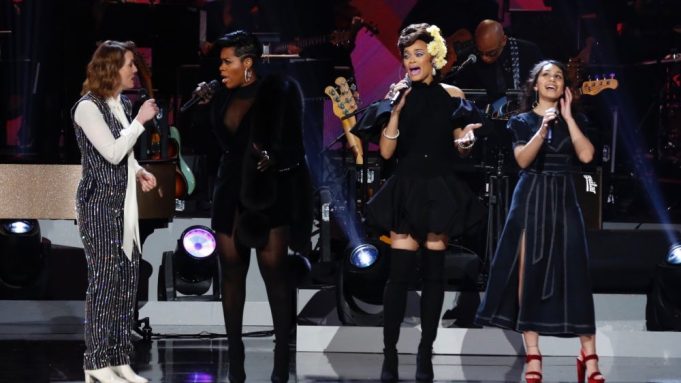 Booking anyone at all to appear in an Aretha Franklin tribute is an act of nerve, since she was arguably the one performer in pop music history who can be said to have had no real peers as a singer, even in her day, much less ours. With that as a given, “Aretha! A Grammy Celebration for the Queen of Soul,” airing tonight on CBS, is about as good as these things get, which is a good thing, considering how flagrantly embarrassing it’d be if the show had had to settle for even the B+ list of contemporary singers. The guest list here is a grade above that.

You could make a top 10 list just of your favorite sustained high notes struck during the two-hour telecast. For myself, I’d have to top that list with whatever gritty stratosphere it is that Patti LaBelle is entering at the climax of the 1970 hit “Call Me,” following a bit of a cappella vamping between stops and starts from the Rickey Minor-led band. But then, the currently blonde bombshell LaBelle is already well into orbit before she’s completely come out from behind the drum shell at the beginning of the tune. There is a reason producers have had her on speed-dial since the early Reagan administration.

Runner-up for “best note” is a tough one here — maybe a tie between Yolanda Adams, Celine Dion and Fantasia, who gets the very last word, under the end credits. But everyone here is able to sustain a performance that does start-to-end justice to the word soul, even if they are only national-class and not world-class belters. There is really only one artist on the bill who doesn’t belong in that league, and that’s Rob Thomas, but he’s on hand only to play the George Michael role in his and Fantasia’s recreation of the 1987 Franklin/Michael duet “I Knew You Were Waiting (for Me),” and he’s surely be the first to blush at being included in this company, even as a cameo player. He’s no belter, but he’s a belter ally.

As elongated highlights go, that’s an easy call: It’s the seven minutes given over almost at the end of the telecast to a gospel medley. Preceded by host Tyler Perry’s nod to the finally released “Amazing Grace” documentary that captures Franklin at her best in a church setting in 1972, Adams, Shirley Caesar and BeBe Winans take the stage to blast through three spiritual classics. Those of us who were there for the taping at the Shrine Auditorium in January still feel like we ought to be tithing to whatever church Adams, Caesar and Winans were presiding over for that electrifying segment. (I still fondly recall Caesar singing her way back into the wings, mic still on, well after the number ended, something you don’t get to hear in the TV edit.) During “Mary, Don’t You Weep,” the cameras catch a very rare sight indeed: an audience that knows how to clap along in 6/8 time. But the medley ends, as it should, with “How I Got Over,” because that’s a song that’s just a hit, in any language, genre or denomination.

Brandi Carlile and Janelle Monae tie for best pinstripe suit. Carlile introduces her own solo performance with a short speech about how Franklin influenced singers of different genres, which is clearly meant as the preemptive answer to the unasked question, “What is white girl doing up there?” Her “Do Right Woman” is a slightly more subdued affair than some of the other performances, which frankly is a nice respite in an evening where almost everyone is going full throttle — and Carlile does the promissory ballad right, which she had a head start on, having spent most of 2018 including it on her tour.

As other included white chicks go, no one is going to accuse Dion of giving a laid-back performance, but her rendition of “A Change is Gonna Come” also does R&B right. And if anyone is questioning why you’d pick a French-Canadian to sing an anthem that is going to be set against a backdrop montage of 1960s civil-rights still images… yes, it’s counterintuitive, and yes, as the reaction shots reveal, it somehow completely works. (Dion’s strange but wonderful dress is sort of a redemptive message unto itself… all severe Good Friday black on top and a yellow Easter lily below the waist.)

In a sleek suit that makes her look like an animated barcode, Monae does the 1971 hit “Rock Steady” and seems much looser than the regimented mode she sometimes goes for in performing her own material — so loose in her footwork, in fact, that it sometimes seems like she’s doing more of a tribute to James Brown than Franklin, which is not a bad thing at all.

“Rock Steady” is a good example of one of the songs included here that feels like a deep cut or album track, even though a quick search reminds us it went top 10 on both the pop and soul charts at the time. There’s a lot of that welcome rediscovery in the set list for this tribute. Take the three-song medley that Alicia Keys and SZA get to do — 1970’s “Spirit in the Dark” (that one’s all Keys, with the singer taking her hands off the keys long enough to act out the “Put your hands on your hips” part), 1972’s “Day Dreaming” and 1971’s “You’re All I Need to Get By.” The only regret you’ll have watching this is that all of these numbers from Franklin’s Atlantic years don’t go on a little longer, and that we don’t get to see even more of what Keys calls her and SZA’s “sisterhood.”

There’s literal sisterhood when Chloe x Halle move on to the Arista years with “Sisters Are Doin’ It for Themselves.” That commercially fruitful period is also saluted with “Freeway of Love,” which Andra Day does a fine job with, even if you have the sense she might have drawn the short straw for that one, since there’s not as much to be done with that straightforward smash as some of the others. Kelly Clarkson brings it back to Atlantic with an unassailable take on “I Never Loved a Man the Way I Love You,” complete with an approving reaction shot — coincidental? —of one-time nemesis Clive Davis. (Davis, who revived Franklin’s career in the MTV era, executive produced this show and offers brief spoken testimony, as does Smokey Robinson.)

Apart from the gospel medley, Adams nails “Young, Gifted and Black,” a song you immediately want to adopt as an anthem if you don’t qualify in any of three categories. John Legend, one of the few dudes allowed on board this ship, does “Bridge Over Troubled Water” in stripped down fashion — his piano, an organ, four backup singers — saying “we’re gonna cover her cover” of Paul Simon’s standard.  H.E.R. does another cover of a cover, “I Say a Little Prayer,” with some effective guitar picking; her shades, though, as valuable a trademark as they’ve been for her, are a bit of a charisma stifler in this close-up context.

The special opens with Jennifer Hudson getting some of the biggies — “Respect” and “Think” out of the way — and if her mission is to assure everyone that the upcoming biopic she’s slated for has been well cast, that’s accomplished. The show ends with an all-star quartet version of “Natural Woman,” in which Alessia Cara looks scared to be standing next to her elders, Day, Carlile and Fantasia. Cara doesn’t sound the slightest bit daunted, though, once she opens her mouth. Maybe, to paraphrase the scriptures, the perfect lovefest casts out all fear.

It’d be easy to kill a tribute like this dead with the wrong band. There’s something about all-star TV salutes and the Muscle Shoals sound that are mutually exclusive, or should be, but Rickey Minor’s expert helming makes it sound like not that far a trip from an Alabama studio to the Shrine stage. Producer Ken Ehrlich assembled the right talent cast, too. As many Grammy-tangential tribute shows as have been and will be done, he surely knew there was only one shot at doing one for the greatest singer of our lifetimes. Nothing can live up to the deeply inimitable texture of Aretha’s own voice, as the occasional vintage clips of her make clear — not even the power and skill of a LaBelle or Adams — but this “Grammy Celebration” is the best testimony and simulacrum that mortal voices could accomplish.

“Aretha! A Grammy Celebration for the Queen of Soul” airs from 9-11 ET/PT on CBS stations.