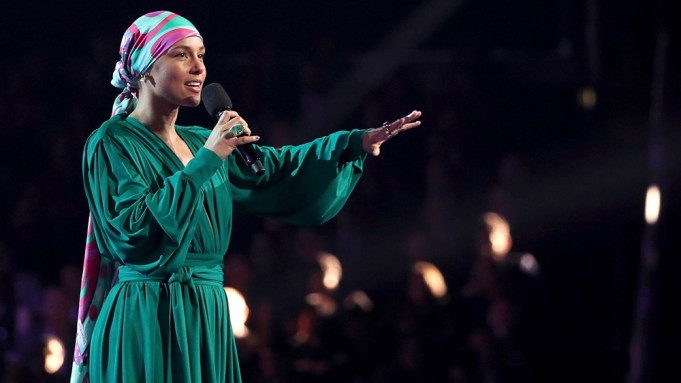 Last year, the Grammys came under fire for a relative dearth of female winners and performers onstage and, furthermore, for Recording Academy chief Neil Portnow saying that women needed to “step up” in order to be recognized. “I guess this year we really stepped up,” best new artist winner Dua Lipa quipped in her acceptance speech. But women in music doing superlative work is no new phenomenon. Before delivering criticisms of a show that is in many ways continuing a long-term slide, it’s worth noting that the ceremony itself stepped up this year.

In an invigorating one-two punch early in the night, Kacey Musgraves and Janelle Monae delivered performances that served to justify their places among the night’s top nominees; Musgraves’ take on her own song “Rainbow,” illuminated with a prism of colored light, came across as a bit of low-key advocacy for the LGBT community, while Monae’s medley of songs off her “Dirty Computer” album was a worthy provocation. Quoting her own record, Monae shouted “Let the vagina have a monologue!,” a note fitting material whose frankness and imagination helped vault Monae to greater prominence than ever before. Musgraves’ show-closing album of the year win made for a thrilling rebound from the previous year’s “step up” nightmare, and marked the mainstream coronation of an artist who uses her moments in the national spotlight with care and thought.

The whole night was full of emerging stars every bit as exciting. Cardi B (using an apparent lip-sync to her advantage, focusing more fully on her showmanship) and rising star H.E.R. owned their moments on the stage, lending the refreshing feeling of stars being cemented or first established, rather than just burnished; Cardi’s speech for best rap album (the first win in that category for a solo female artist) was refreshingly frank, in keeping with the traits that have made her a star for the unvarnished social-media age. Lady Gaga’s Bradley Cooper-less spin on “Shallow” was one of the evening’s few duds — it was as though, separated from her duet partner, she were running through all her first-draft ideas before a more “serious” Oscars moment. The performance’s “Artpop”-leftover glam-rock trappings and miscalculated theatrics felt like a retreat into the safety of falsity, unworthy of a star who’d shown us so much subtle calibration and real inspiration in her movie this year. But her inclusion, and willingness to take a risk in a pre-Oscar season when safety might be more advisable, was appreciated, too.

Elsewhere in the show, even the boring or obligatory pieces of Grammy-iana were given a happily female spin. A group of women artists including Maren Morris, Musgraves, Katy Perry, and Miley Cyrus (along with the co-ed Little Big Town) joined Dolly Parton for the rote sort of tribute to a legend that was, for once, directed at a female icon. Diana Ross’ paying tribute to herself at 75 had a similar reinventing-the-musical-canon sense, while presenting a bit more crisply and with a welcome helping of Ross’ loopily fun self-regard. “Happy birthday to me!” she shouted as she ended her time onstage; her birthday is in late March. (The less said about the deeply strange and classically Grammys choice of Jennifer Lopez to perform a Motown tribute, the better.) Host Alicia Keys, who bore the brunt of several production errors and was often somnolent when speaking (as in a well-meant but misbegotten opening set piece including speeches by Gaga and Michelle Obama), came alive at a piano running through a medley of other artists’ hits, and one of her own. Was it necessary? Little on the Grammys ever is. But it felt a bit different than the sort of thing — endless rock by white men, even as that genre and that demographic class of artist has lost its hold on the music listening public’s imagination — that generally predominates.

The show handled the optics problem around gender elegantly and well, by giving real time and attention to women artists who deserved the space, and who might never have been given the shine if not for the “step up” scandal. But recent years have not been easy on the Grammys on several fronts. The show’s last truly star-packed show, in 2017, featured a showdown between Adele and Beyonce. Adele winning — a predictable outcome given the Academy’s tastes for white artists and for genres rooted in the oldest sorts of popular-music tradition, but one that incensed admirers of Beyonce, who’d just lost the top prize for her second industry-shifting album in a row — seemed to break a dam of sorts. The Grammys had a legitimacy problem, one that allowed artists who’d been frustrated to disengage. A particularly embarrassing moment came in the presentation of the song of the year Grammy, when Keys delivered a stem-winding story about having desperately wanted to win that prize earlier in her career, so much so that the artist who beat her, John Mayer, gave her a piece of his trophy. Two people for whom this top-category award had served a meaningful symbolic purpose then presented the award to Childish Gambino’s incendiary hip-hop song “This Is America” — with Gambino, née Donald Glover, not in attendance. (The absent star also won record of the year.)

This was a historic milestone, the first Grammy in this category awarded to a rap artist. And it was one that had taken so long in coming that Gambino skipping the ceremony (appearing during the ceremony only in an ad for Google Pixel phones, in which he danced with an animated avatar) seemed a more legitimate choice than showing up. Somewhere in the shift between Keys’ generational cohort and Gambino’s, the show had fallen out of favor. A clue as to why came in the next performance, which was a team-up between white rapper Post Malone and the Red Hot Chili Peppers. Malone, a white practitioner of a historically black art form, was that genre’s first performer of the night, nearly an hour into the show, calling to mind another recent controversy, the Grammys’ honoring white rapper Macklemore over his better-regarded black peers. And the Peppers were performing material that seemed, at least to this viewer, not urgently recognizable enough to demand a performance in the first hour of an awards show honoring new music. The Grammys’ eligibility period has always caused them grief — as with the show’s opening number “Havana,” released by Camila Cabello in September 2017. That’s forever in music-fan years. But something bigger is at work here. The Grammys are so self-consciously meant for any possible viewer that they shy away from edge. For a generation of artists whose strength is their spiky distinctiveness, it no longer feels like a show to which it behooves even top winners to pay deference, or even attention.

Gambino was hardly alone. Joining just about every one of her peers at the very top of the industry in bypassing the show was Ariana Grande — who, unlike Gambino, Taylor Swift, Beyonce, Jay-Z, Ed Sheeran, Rihanna, Kanye West, Justin Bieber, Chance the Rapper, Adele, the Weeknd, and so on — at least provided a reason in public. (Drake showing up to claim a trophy came as a shock — before it seemed in service of a rhetorical point, as he gave a speech urging artists to pay less attention to awards before appearing to get cut off by a throw to commercial.) That none of those other stars, some of whom have things to promote and others of whom could in some universe provide to the Grammys the boost mega-movie-star presenters give the Oscars each year, even bothered to give a reason for skipping a show that touts itself as “Music’s Biggest Night” is bad news. Grande’s public repudiation of show producer Ken Ehrlich, who she claimed was being dishonest about her failure to perform on the broadcast (she said her “creativity [and] self expression was stifled by” Ehrlich to the extent that she was not just canceling a planned performance but staying home entirely) was worse. That Grande ended up winning her first career Grammy before the telecast began cemented the error — this was the sort of career-capping moment that could have made great television, were Ehrlich willing to cut into the time he afforded the Red Hot Chili Peppers, or to a lengthy tribute to the work of Portnow himself, moments after Dua Lipa’s onstage dig. This is a show that would rather spotlight a Jennifer Lopez Motown tribute — privileging music’s legacy institutions and employing a blue-chip star with little connection to the material — than the industry’s epicenter; no wonder so many close to that center keep themselves busy doing other things on Music’s Biggest Night.

Per the reporting of Variety‘s Jem Aswad and Shirley Halperin, the crux of Grande’s disagreement with the Grammys camp was their refusal to allow her to perform her new single “7 Rings” — which, incidentally, is currently the number-one song on the Billboard charts, off an album only just released Friday by an artist whose present level of fast-burning level of success and acclaim currently lacks an equal. Grande is currently the biggest act in music, with a narrative — having overcome tragedies on the global and personal scale — that is endlessly telegenic. Anything she did would compel; the Grammys would have been well-advised to give her 15 minutes. (She, too, appeared during ad breaks, in an Apple ad in which she, like Glover, was depicted as an animated avatar and a T-Mobile spot where her song “Thank U, Next” played. Her absence was made literal — the corporeal Grande didn’t even show up to her own commercials.)

But Ehrlich, the longtime Grammys producer whose broadcast tends to fall into certain well-known, unlovable grooves (endless tributes to acts from the past and a privileging of rock music over rap and R&B even as the latter genres have overtaken the music industry), was resolute. And in falling short of getting, or not trying all that hard to get, music’s top acts, plural, on board a broadcast centered around that most youth-oriented, vanguard-courting of media, he failed his broadcast. It strikes an awards-watcher that the Grammys, honoring practitioners in a field vulnerable to youthquakes but for so long produced by the most risk-averse of industry types, and the Oscars, whose great strength is their robust tradition but whose producers, swapped in and out practically every year, are always seeking to reinvent, should swap strategies. I’d like to see what the producer and director who handled Beyonce’s Super Bowl appearances, the MTV creative team (CBS’ corporate siblings!), or “The Voice” consigliere Mark Burnett would do with the Grammys. But really, crucially, I’d just like to see something different — and sustained star power, for one thing, would be a note the Grammys haven’t meaningfully hit in a couple of years.