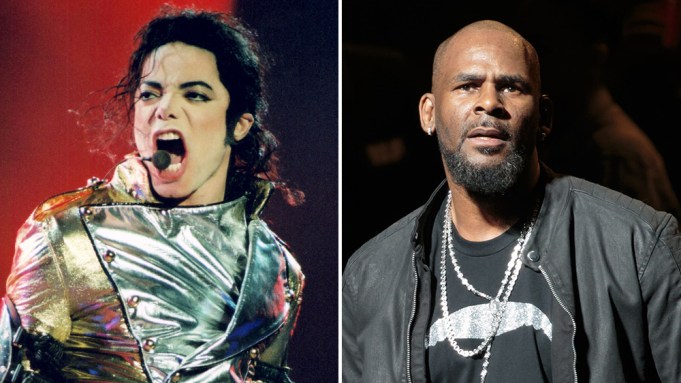 The Jan. 3 debut of the Lifetime docuseries “Surviving R. Kelly” dealt a swift blow to R. Kelly’s career. One week after the premiere of the incendiary exposé covering longstanding sexual abuse allegations against him and uncovering new ones, Lady Gaga cemented his persona non grata status by joining Team #MuteRKelly.

Gaga apologized for working with him and vowed to remove their 2013 duet “Do What U Want” from streaming services, a move Celine Dion also made four days later with “I’m Your Angel,” her 1998 collaboration with Kelly. So what do we do now with arguably the biggest R. Kelly superstar summit of all: “You Are Not Alone,” the 1995 number-one single he wrote and co-produced for Michael Jackson?

The “Thriller” icon, who died in 2009 at age 50, could be on the verge of becoming the next cancelled superstar of 2019 following the Sundance premiere of another legacy-mangling documentary/exposé about a music legend. “Leaving Neverland” makes a new case for the old child molestation allegations against Jackson, and it screened to a standing ovation and unanimous praise. But even in a #MeToo era that increasingly blurs the line between art and personal life, can we just obliterate the Michael Jackson memories that helped define the best years of our lives?

The parallels with Kelly are haunting. Both were first dogged by rumors of sexual indiscretions around the same time (1993–1994), and both nonetheless continued to enjoy mass commercial success for years. Jackson would go on trial for his alleged misdeeds and be subsequently found not guilty, while Kelly was indicted on child pornography charges and exonerated in 2008. Although the Me Too movement reignited anti-Kelly furor, his career remained more or less untouched until “Surviving R. Kelly” turned public opinion further against him and sparked a new FBI investigation and calls by the Chicago District Attorney for victims to come forward.

Michael Jackson will be harder to tear down. For one thing, he’s no longer around to suffer the brunt of our rage. He also was an even bigger global superstar than Kelly, who always has been more an R&B legend than a pop one. Jackson’s influence spans multiple genres, multiple continents, multiple generations, and nearly a half-century. He has contributed in some way to the tapestry of all our lives, from Baby Boomers to post-millennials. He was mainstream and family-friendly the way convicted sex offender Bill Cosby was, but while we can easily boycott Cosby’s TV series and movies, erasing Jackson isn’t so simple.

Take the Sundance Film Festival soundtrack, for example. Despite the specific and overwhelming evidence presented in “Leaving Neverland,” which includes detailed interviews with two of Jackson’s accusers, Wade Robson and James Safechuck, the King of Pop’s hits continued to blare from the speakers at parties and in businesses throughout Park City, Utah, after the documentary’s premiere.

The commercial effect on Jackson’s music is pending, but it will be interesting to see if it echoes the surge in R. Kelly’s Spotify popularity when the streaming giant temporarily removed him from its custom playlists last year and the spike in his sales following the premiere of “Surviving R. Kelly.” (Spotify confirmed a 16 percent increase in streams of his music.) How would the cancellation of an artist who has permeated our pop-cultural consciousness to a far greater degree, a man responsible for one of the biggest albums of all time, even work?

Do we begin with The Jackson 5, also punishing his brothers, who may or may not have been privy to his alleged sex crimes? Should his musical collaborators — which include Paul McCartney, Stevie Wonder, Mick Jagger, Diana Ross, Slash, Teddy Riley, Quincy Jones, his sister Janet, and everyone who sang with him on “We Are the World,” the 1985 USA for Africa charity single he wrote with Lionel Richie — do a Gaga/Dion and try to pull their work with Jackson from streamers? Do we pretend that “Motown 25: Yesterday, Today, Forever,” the landmark 1983 TV special on which Jackson introduced his career-making moonwalk, never happened?

What becomes of the legacy of “Thriller?” Will the National Academy of Recording Arts and Sciences rescind the seven Grammys he won for it while we all vow never again to listen to “Billie Jean” or patronize any club, bar, restaurant, or store that dares to play it? Should his labels, Motown and Sony, wash their hands of his entire back catalog and his posthumous sales, lest they, too, face the public firing squad?

Is it time to forget about the role “Thriller” played in mainstreaming black music in the ’80s and how “Billie Jean” changed everything by opening MTV to black faces? Without Jackson, there’d be no Usher, no Justin Timberlake, no Chris Brown, no Justin Bieber, and, for better or worse, no R. Kelly. For all the debate about his commitment to his blackness, few musicians have done more for black than Michael Jackson. Thoroughly cancelling him would demand so much more than not listening to or playing his music.

The music industry has been slower to come around to the Me Too movement than other branches of the entertainment industry, so it remains to be seen if cancellation will affect more than the freedom and the future employability of the accused (which are obviously not concerns for Jackson). Harvey Weinstein’s career may be over, but the films he produced for Miramax and the Weinstein Company play on. Actors can refuse to work with Woody Allen in the future, but no one is going to try to pull “Annie Hall” or “Hannah and Her Sisters” from circulation or return the Oscars they won working with him.

Movies and TV shows, though, are more of a collaborative effort than music, which is credited solely to the performer. “Surviving R. Kelly” may have increased interest in Kelly’s music, but for those who choose to cancel him, it’s a cleaner process.

Muting Jackson, though, will be messier, not just because of his pervasive influence on our lives, but because punishment is less effective when it’s doled out posthumously. His music will continue to get airplay. Despite his acquittal on child molestation charges in 2005, the general consensus was divided: Many people still believed he was guilty. That didn’t stop them from playing his music then, and it probably won’t stop them now.

At this point, the damage to Jackson’s legacy is irreversible. As the title of the documentary, which references both his estate and “Peter Pan,” suggests, the innocence that he clung to unhealthily in life is gone for good. Everything may be different after “Leaving Neverland,” but for a number of lifelong Michael Jackson fans, “Billie Jean” will always sound the same.