With New ‘Lion King’ Tune, Elton John May Compete Against Self for Song Oscar

John already had a strong contender with the original song he co-wrote for "Rocketman." But is Beyonce also entering the race? 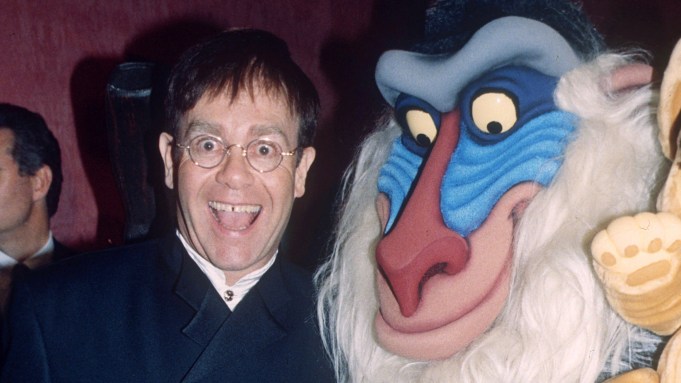 Elton John is going to face some stiff competition in this year’s Oscars race: Elton John.

He’ll have two tunes in competition for the Academy Award for best original song this year. The just announced track listing for the “Lion King” soundtrack reveals he and lyricist Tim Rice did write a new end-titles number for the upcoming remake, titled “Never Too Late,” which he also performs with the help of an African choir.

John was already an early contender in the Oscar song sweepstakes with “(I’m Gonna) Love Me Again,” which he and Bernie Taupin wrote to go over the closing credits of his biopic, “Rocketman.” That number, set in a bouncy retro-Motown style, was performed as a sort of identical-twins duet between John and his screen portrayer, Taron Egerton.

What the track listing for “The Lion King” fails to make clear is whether Beyonce will join him as a competitor this year.

In early 2018, John expressed hopes of collaborating with the superstar, who’d been voice-cast as Nala. “They need to have a new end-credits song,” he told the Sun then. “We’ve been speaking to Beyonce’s people, and hopefully Tim and I and her can cook up something. … And it will be great to work with her. So we will see.” Today’s track list announcement is the first public confirmation that that much-ballyhooed plan never panned out.

Beyonce is listed as appearing on the “Lion King” soundtrack, but only once, reprising the original movie’s “Can You Feel the Love Tonight” — which won the best song Oscar for John and Rice in 1995 — along with Donald Glover, Billy Eichner and Seth Rogen in a new version produced by Pharrell Williams and coproduced by Stephen Lipson.

But there’s a “TBA” listed for track 14. Director Jon Favreau told Fandango that Beyonce did do a song for the soundtrack, on her own and presumably not involving Sir Elton — so bets are on that that’s the reason for the missing song title. If that proves to be true, and the tracks are in the order they appear in the film, Beyonce’s new number will come near the end of the film but not serve as the movie’s climax.

If John (pictured above at the original film’s London premiere in 1994) does get a pair of best song nominations this year and compete against himself, it won’t be the first time. In ’95, he and Rice didn’t just win the Oscar, they claimed three out of five nominations in the category. The other two “Lion King” songs up that year were “Circle of Life” and “Hakuna Matata.”

Naturally, those two numbers are back in the new version’s soundtrack, too, along with “I Just Can’t Wait to Be King” and “Be Prepared.” It had been rumored that the latter song was not being revived for the new film, but it’s on deck after all, being performed by Chiwetel Ejiofor — perhaps with new lyrics, since the track listing (uniquely among the credits here) includes the subtitle “(2019 Version),” suggesting a substantial reworking.

Although all the songs from the original movie are present and accounted for, none of the songs that were added for the Broadway version in 1997 are here. “The Morning Report,” besides being added for the show on the Great White Way, was fully animated and added to a special deluxe DVD edition of the original film — but it was taken back out for subsequent home video re-releases and even finally excised from the Broadway production in 2010. So it’s no great surprise the now-you-hear-it, now-you-don’t tune didn’t make the cut in 2019.

Disney reps did not respond to requests for comment on the status of the Beyonce song discussed by Favreau in his Fandango Q&A. When asked if the Beyonce track was the only new song written for the film, he answers, “Yeah,” which seems curious, given the announcement of a new Elton number.  “There’s a song that she performed and wrote in the spirit of the production along with working with Lebo M., who’s part of it with Hans Zimmer,” said the director. “They were all collaborating with her and helping to bring this new piece of music into a film where there’s already a very established musical personality to the piece.”