‘Who Let the Dogs Out?’ Doc Offers Fascinating Look at the Origin of the Baha Men Hit

The film held its world premiere at SXSW over the weekend. 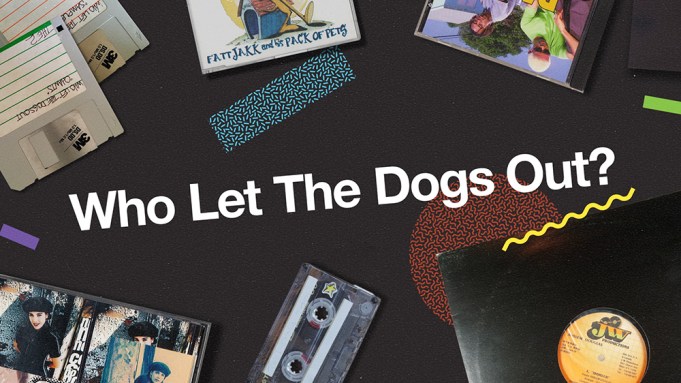 “Who Let The Dogs Out,” the turn-of-the-millennium-era Grammy-winning Baha Men hit, has eclipsed kitsch to become a stadium anthem. And thanks to its peculiar origin story — the hook dates back to 1959 and the song’s ownership is a copyright maze — it’s now the subject of a documentary film, which held its world premiere at SXSW over the weekend.

New Yorker Ben Sisto serves as the documentary’s expert narrator. His decade-long obsession with the smash, which began when he noticed a curious, incomplete citation on the tune’s Wikipedia page, inspired a touring one-man show. Director Brent Hodge brings the story to life, tracing the lineage of the jam backwards, chronologically, with cleverly edited interviews with the multiple musicians, industry insiders and chant purveyors of the ubiquitous phrase. In the process, the film takes viewers from to the Bahamas, Trinidad, England, Florida, New York, Seattle, Michigan and finally to Texas all in an effort to answer the timeless question: who really did let the dogs out? (See a clip from the documentary, featuring one of the many who claim to be partially responsible for the global success of the Baha Men version, above.)

Variety caught up with the filmmaker at the Austin premiere of “Who Let the Dogs Out?”

What made you want to do this documentary?
I’m always looking for “off the beaten path” stories. “Who Let The Dogs Out” was perfect … because there’s a question implicit in the title of the song that we don’t know the answer to, and also, it’s a hit song but nobody knows that there are nine different people who claim that they wrote it. Nine different people! So we started hearing versions of it from [before the hit 2000 version by Baha Men known to most] from 1996, from 1994. It’s the same hook featuring the dogs, the chant, the barking. It’s a story about copyright. It’s a story about ownership. I love the fact that people will learn something about the music industry in this film.

What makes “Who Let The Dogs Out?” more interesting than other songs that have had publishing disputes in years past and worthy of an entire documentary?
Here’s the thing. Ultimately, the song was a chant before it was a song. And it was a sports chant. The sports world is part of the reason the song was a hit anyways [thanks to the Seattle Mariners]. It comes back to 1986 in Austin, Texas. A high school in Austin came up with this chant, and we have video of the chant [from a football team] in the film and it sounds identical to the hook of the hit, which is fascinating.

Did the ownership question of the song ever get fully resolved?
It’s similar to some other song publishing disputes, in that it’s lyrics, and music. But in this case, it’s interesting, because, is a chant lyrics? Is a chant a song? Not really, it’s not. One older version of the song we feature in the film is called “Who Let The Dogs Loose” — technically that means dogs are still being let out of something, but it’s a different song.

Was it expensive to clear the master and publishing of the actual song “Who Let The Dogs Out?” You couldn’t have done the documentary well without it, and one could argue your project might increase the value of the song exponentially, if your film also becomes a hit.
It wasn’t as expensive as we initially thought it might be to clear. Universal owns the master, and BMG and a few others have the publishing. And everyone was great to work with, they all were aware of the song’s story, and they all loved [our idea for the doc]. It was a six-year legal battle [for them] that didn’t end all that long ago ….I think it ended in 2006 for the parties who were fighting over the copyrights.

Who was most responsible for the song becoming a global smash in your opinion? It seems like you implicitly tip S-Curve Records founder Steve Greenberg as the one who made it a hit in the film.
This is the best part of the story for me. It comes down to Hanson’s manager and Chumbawamba’s manager. This is straight ’90s stuff. Steve Greenberg from S-Curve Records was Hanson’s manager [at the time]. They found a hit (“Who Let The Dogs Out”), then the band they wanted for it (Baha Men). They put it together and the song became a massive success story. It was a known song already in the Caribbean. So, then you go down the line, and you find out a lot of other people released versions of the song before it was a global hit. As soon as a song gets popular, people come out of the woodwork. But yes, Steve had a vision for the song and followed through with that vision. To me, Steve is the real genius behind the song. He changed the way the song was. It takes a real talent to get that song out to the world and the song wasn’t getting that kind of love before. I personally think he let the dogs out. He doesn’t.

One fascinating aspect of the film was how sports played a role in making the song big in America…
The sports angle is a huge part of this story. And it’s a massive section of the film. When you hit stadium level sports, there’s a next level involved. We interview the marketing/promotions guy in the film for the Seattle Mariners who had a big role in making the song huge. Sports made the song big, but sports, especially football, started the song.

Another interesting part of the documentary was the Florida footage you shot. Talk about that a little bit?
Era is very important. The 1992 version of the chant that we found on a floppy disc down there in Florida comes down to an SP-1200 sampler and shows that the hook was already out there, just like the phrase “the roof is on fire” [that was used in songs in the 1980s and 1990s] was “out there” at the time. But who really owns it? Who owns a phrase? “Who Let The Dogs Out” actually was a Trinidadian term that kind of means “the boys are in the club.” It’s a slang term that was used as a sample in songs. So we ask the question [in the film] “what is ownership?” And also, like, does art just re-create more art? Is that ok? We all need inspiration from something.

So, we have to ask, who really did let the dogs out?
We all did! Without us talking about it or listening to it [still] there is no movie. It’s a phenomenon.