The ex-Lumineers member collaborated with Los Angeles artist Liza Nelson for the clip to "Train." 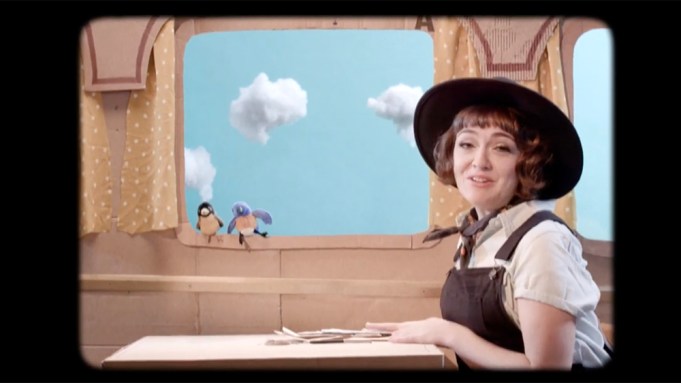 Neyla Pekarek’s post-Lumineers solo career is off to a strong start with a show at the Opry at the Ryman on Saturday night and the Monday release of her new video for the song “Train.”

The clip was directed by Los Angeles’ Liza Nelson and features Pekarek riding a cardboard constructed locomotive in a look reminiscent of Michel Gondry’s work using miniatures and perspective shifting in addition to good old-fashion kitsch.

Says Pekarek: “Liza came up with the concept. …She built the entire set from a lot of garbage and items from the dollar store. She was inspired by that Michel Gondry kind of style. It just turned out beautifully.”

The two were former roommates in Denver. “She knows me really well, so I didn’t really give her a whole lot of direction. I’ve talked to her a ton about this record, she did a lot of early promo shots, one of them ended up being one of the main photos on my album. She did the album art as well. But it was so nice to work with a director that I know so personally. I could just act freely on set. It feels very musical theater-y.”

Signed to S-Curve Records, her debut album “Rattlesnake” was released on Friday. It was inspired by the legend of Colorado pioneer Kate McHale Slaughterback. As the story goes, Kate came upon a rattlesnake while hunting for her supper back in 1925. One rattlesnake became two, and soon, Kate was surrounded by no less than 140 snakes. While her three-year-old son and her horse looked on, she singlehandedly fought off and killed every single rattlesnake with nothing but a roadside sign. Then she skinned them and made herself a dress.

Read more about the “Rattlesnake” album here and watch the video for “Train” above.