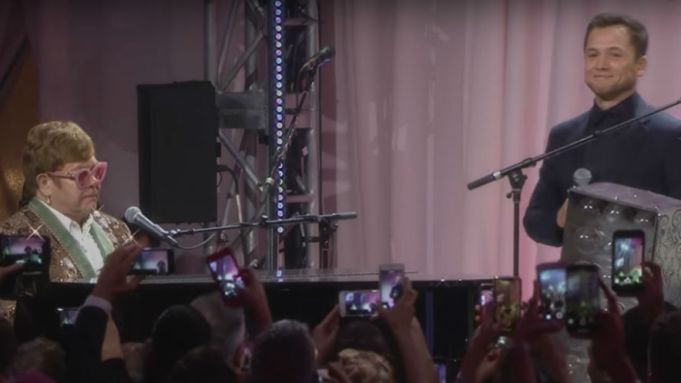 On a night when music was arguably the big winner at the 2019 Academy Awards, British actor Taron Egerton gave a preview of his performance in what could be the next big song-heavy blockbuster, the Elton John “fantasy musical” “Rocketman.” At Elton’s annual Oscars party, which includes an auction to benefit his AIDS foundation, Egerton sang “Tiny Dancer” accompanied by the man himself on piano and harmony vocals. According to reports, the performance was spontaneous.

While recent years have seen a bounty of music-related biopics such as “Bohemian Rhapsody” and Netflix’s forthcoming Motley Crue biopic “The Dirt,” Egerton stresses that’s not what “Rocketman” is. “Everyone thinks it’s a biopic. It isn’t. It’s a fantasy musical,” he told Collider last May. “So it’s actually his songs used to express important beats in his life at emotional moments. He’s not the only character that sings.” Indeed, a couple of the moments in the new trailer show musical-style moments and routines.

Much like Bradley Cooper’s famous insistence that all vocal performances in “A Star Is Born” be performed live, Egerton told Collider, “I will always be singing on set. No miming. I’m just not interested in doing it that way.”

Egerton will also appear as the title character in the upcoming Otto Bathurst film “Robin Hood” alongside Jamie Dornan and Jamie Foxx.