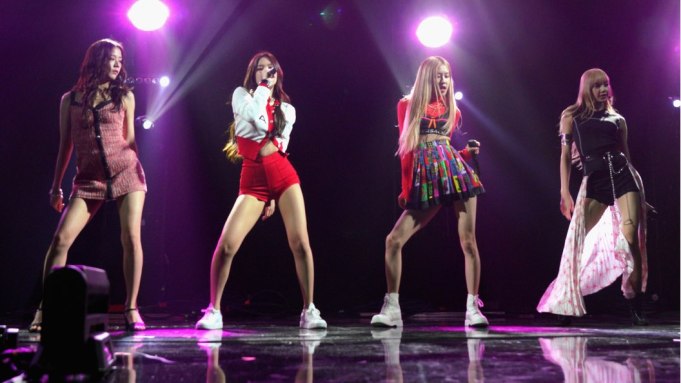 Who knew the future of music is… guys with guitars? You might have thought otherwise during most of Universal Music Group’s annual pre-Grammy “Music is Universal” private showcase Saturday, during which hip-hop, R&B, Latin music and K-pop were heavily represented. But at the end, it suddenly turned into an old-fashioned rock concert, thanks to short sets from two of UMG’s most prominent Grammy nominees: Greta Van Fleet and that renowned guitar slinger Post Malone.

Post Malone was reportedly slated to begin the program for a few hundred invited industry guests inside a tent outside The Row DTLA in downtown Los Angeles’ industrial district. His delay meant he provided the climax instead of introduction the two-hour show, but top billing was hardly unwarranted for a guy who’s up for both Album and Record of the Year and who was responsible for a healthy amount of UMG’s own billing in 2018.

But he wasn’t in rockstar (sic) mode, exactly. Introducing himself as Austin Richard Post, the hip-hop/pop crossover star showed up his folkie side, with a two-song acoustic set that provides a quiet interlude on his tours but was the main course here. He mentioned a recent mishap, saying he’d cut his finger opening something, just days before his Grammy appearance, so the audience shouldn’t be surprised by any odd chords — and added that he was being either aided or abetted by two mimosas, one of which he quickly downed before launching into “Stay,” the emo feel-good/bad hit of last year. His finale was more of a rarity: “Feeling Whitney,” a rarely performed bonus track from the deluxe edition of a previous album, “Stoney.” Injury or no, Post Malone’s picking was close enough for rock ‘n’ roll, and he established anew that if ever gets tired of being a hip-hop superstar, a rich (well, maybe not quiteas wealth-generating) future awaits him in Americana.

“Let’s have a good-ass Grammys,” said the departing folk-rapper, who’s set to perform with the Red Hot Chili Pepper on Sunday’s telecast. “Let’s get f—ed up and have a good time.”

Prior to Post Malone’s acoustic denouement, the UMG showcase had reached a louder climax with two songs from Greta Van Fleet, the great white hope of rock ‘n’ roll — or, really, the only hope for a young rock band achieving any fresh notoriety in this day and age, like ‘em or not (and polarization has turned out to be their greatest marketing boon). Invoking the ancestral spirits of Zep and Rush, they did their best to turn an intimate tent into Watkins Glen or Cal Jam, and brought to their feet segments of the crowd that had perhaps looked quizzically upon the K-pop that preceded them.

But the appearance by South Korea’s Blackpink was certainly the most newsworthy aspect of the event, providing as it did a platform for the premiere appearance on a U.S. stage by the girl group (although some of their legion of fans, jealously looking at a video stream of the performance, remarked online that it wasn’t a real debut if the fans weren’t there). Their two songs provided a quick glimpse of what a vaster audience will see in two months when Blackpink becomes the first K-pop act to perform at Coachella. Can “the female BTS” rise to that group’s heights, or is BTS’ maleness an essential part of the equation for a largely young and female audience? That remains to be seen, but Blackpink’s tight-but-not-unnervingly tight choreography was an infectious thing, for anyone who isn’t overly concerned about dance being far and away the main thing. In 20 or 25 years, at least some territories of the world will probably be obsessing over a Spice Girls-style Blackpink reunion.

UMG’s international divisions had more than just this one reason to be proud, or hopeful, during the showcase. The heavyweight-heavy crowd did not dole out obligatory standing ovations to all the acts that performed, but there was a solid quorum of standees at the end of the mini-set by J Balvin. “Am I the only one speaking Spanish here and singing in Spanish?” he wondered aloud at the outset. He was, and he was happy to represent: “Latino proud. This is our time. This is our moment,” he said, returning to English as he left the stage — next to be seen opening Sunday’s Grammys alongside Camila Cabello, Arturo Sandoval, Young Thug and Ricky Martin.

In a show of the resurgence of R&B spotlighted in the current issue of Variety, Ella Mai opened the event, looking slightly nervous at the outset, as any freshman artist should upon being first up for a small audience weighted with a good number of the most powerful middle-aged suits in show business. She quickly grew into her confidence and had the audience cued up as well as “Boo’d Up.”

Pure hip-hop was represented by YG, who greeted the crowd with his 2016 banger “FDT (F— Donald Trump)”; though he said he’d been nervous about reprising it for this tony crowd, he needn’t have been so worried. His set overlapped by one number with 2Chainz, who performed a previous hit and then said he’d “been in a cave locked up” and “wanted to play some new shit,” which turned out to be a recording played over the PA as he confusingly exited the stage.

Country was rousingly represented with a pair of songs from honky-tonk revivalists Midland, fresh off playing the Novo the night before. Or maybe not so fresh, as they alluded to some post-show partying not having worn off. “We’re used to people being drunk and standing up, and having to stand up because there are no seats,” said singer Mark Wystrach. “Scott Borchetta looks pretty drunk,” helpfully added bassist Cameron Duddy, referring to their centrally seated Big Machine label boss. The theme continue as Duddy introduced their breakout hit “Drinkin’ Problem” as being “about being an alcoholic.” “It’s about not being a quitter!” interrupted Wystrach. The band also played a promising new song about not being “Mr. Right (but) Mr. Right Now, the one all the girls are talking about,” a conversation they hope to continue with a sophomore collection due in the spring.

The UMG event couldn’t be more of a study in contrasts with the annual pre-Grammy party hosted by Clive Davis on the same day, with chairman and CEO Lucian Grainge kicking it off with a promise to not give any long speeches, or even any short introductions, for that matter. He held to that, allowing the showcase to proceed with only short set-change lulls and zero on-stage chatter. An exception was made for a short speech executive VP Michele Anthony gave from her table about a new Polygram slate of music documentaries — see this separate Variety recounting of that film lineup — and a few remarks from film producer Frank Marshall, who’s directed a doc on the Bee Gees.