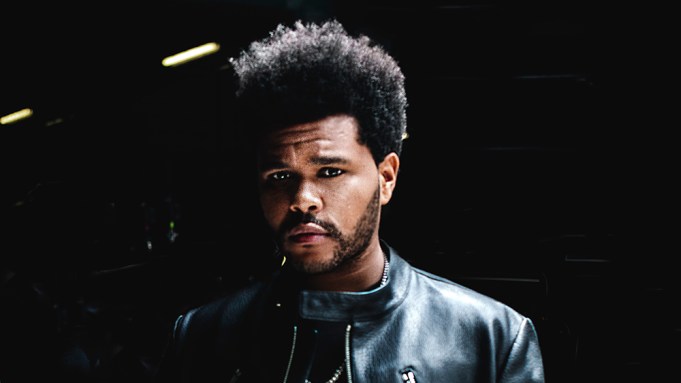 The Weeknd channeled major Michael Jackson and Prince vibes for his first ever performance of recent single “Heartless” on “The Late Show with Stephen Colbert.”

Dressed in a red retro suit and dancing in the backstage hallways of the Ed Sullivan Theater, the three-time Grammy-Award winner had some fun with the impromptu music video, his first performance in a two-night takeover of “The Late Show with Stephen Colbert.”

While The Weeknd released the “My Dear Melancholy” EP last year and the song “Power Is Power” (with SZA and Travis Scott) from the “Game of Thrones soundtrack, and has appeared on several other artists’ songs, he last released a full album in 2016 — but he’s back with several projects. Recently, he announced his role as the creative director for Mercedes-Benz’s EQC electric SUV campaign.

Next week, he makes his acting debut in the Safdie brothers’ “Uncut Gems” with Adam Sandler on Dec. 13.

Sandler revealed that he heard The Weeknd’s upcoming album, giving the project a major co-sign at the IFP Gotham Awards on Dec. 2: “That new album, my God! Did you hear that yet? It’s good.”

Sandler eagerly continued the love-fest.  “First of all, I love that kid. He’s such a nice guy. He’s so deep. He’s so into the Safdies’ other work, he said. “He was excited about doing a movie with them. We got to know each other and got closer. He was a gentleman [on set].”

The Weeknd returns to “The Late Show with Stephen Colbert” to perform his latest single, “Blinding Lights,” tonight, Dec. 6.