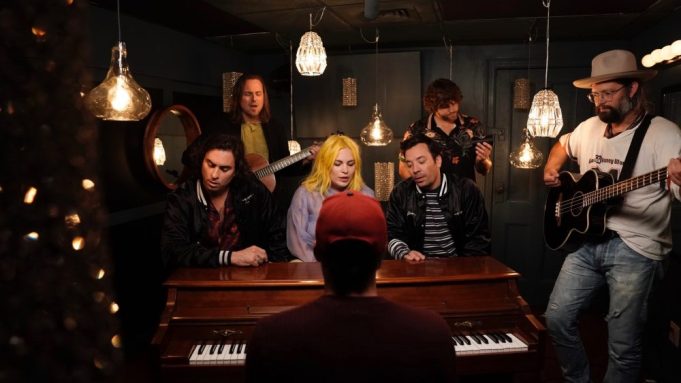 The intimacy of the music room backstage at “The Tonight Show” was put to particularly good use when the sometimes folk-leaning band the Head and the Heart came through, as the group cooked up a low-simmer version of one of their earliest songs, “Rivers and Roads,” with Jimmy Fallon in the middle of the action. Variety has the premiere of the digital-only video.

That the Head and the Heart already have multiple lead vocalists doesn’t prevent Fallon from taking on that role here, too, if only for one line. The host also gets in a bit of piano-top percussion. But he’s setting any comic instincts aside and immersing himself in the solemn hootenanny vibe that made the Head and the Heart folk-rock favorites from the time they first emerged on the Seattle scene in 2009 and independently released a record that same year that included “Rivers and Roads,” marking this as an unofficial 10th anniversary performance.

It’s definitely the season for the valedictory-feeling “Rivers and Roads,” which opens with the lines “A year from now we’ll all be gone / All our friends will move away…” Although what exactly will cause this old gang of theirs to break up goes unspoken, the anthemic sing-along ballad clearly speaks to graduating high school or college seniors. But it’s also been used in other scenarios where friends are about to separate and has been favored by TV music supervisors for farewell moments. The song was used in the series finale of “Chuck” and a season 4 finale of “New Girl,” as well as on the shows “How I Met Your Mother” and “The Good Doctor.”

“Rivers and Roads” was never released as a single but has remained a fan favorite since it appeared on the 2011 re-release of their self-titled debut album on the Sub Pop label. The group has gone on to sign with Warner Records and just released their fourth full-length, “Living Mirage,” in May.

The “Backstage Acoustic” tag here hasn’t been used for many “Tonight Show” performances to date, although the cozily cramped confines of the music room will seem familiar from the show’s other digital video franchises. No classroom instruments here, anyway, but this version of “Rivers and Road” is of a similarly mood-lit vibe to the “Cover Room” videos the show produces, although in this case, obviously, the Head and the Heart are covering themselves.