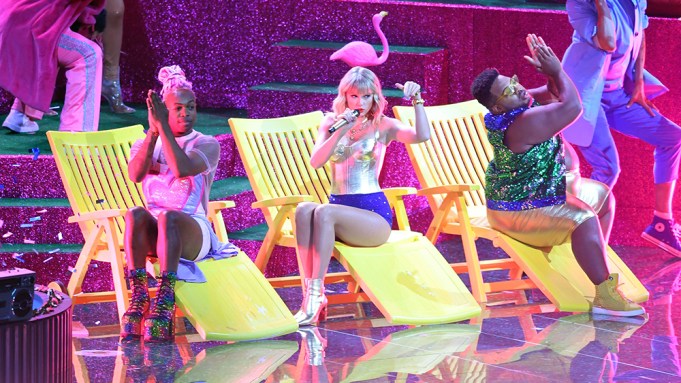 To say that Taylor Swift brought a lot of plotlines with her to the VMAs is one of the understatements of a hardly understated evening: There’s “Lover,” the critically praised new album; there’s the less-critically praised feud with Justin Bieber manager Scooter Braun, who purchased the rights to Swift’s back catalog; there’s the reunion with Katy Perry; there’s the pro-LGBTQ themes of her recent song and video “You Need to Calm Down.”

She chose the latter to start her show-launching set, bringing the song’s eye-popping video to life on the stage of the Prudential Center in New Jersey. It included a giant rainbow over the stage, another as a backdrop, giant emoji-like lyric fragments popping onto the screen and at least two dozen dancers, several of whom were drag queens — and one who was dressed as Swift, complete with a long rainbow-colored jacket. The whole thing was like an anime hallucination.

Swift herself, dressed in sparkly blue shorts and a gold bodice-like top, sashayed through the song for a couple of minutes before there was an abrupt transition into the new album’s title track, an acoustic ballad that almost could not have been more different than the song that came before.

The flavor of the performance changed dramatically as well, as Swift donned a blue jacket and a pink acoustic guitar with the word “Lover” written on it. She moved alone to the center of the stage while dancers swayed in the background, an image of a cloud-speckled sky appeared at the top of the stage, and she positively nailed the song, showing off her formidable singing and songwriting talents. The cameras cut to various stars in the crowd, ranging from ringers singing along to Camila Cabello, Swift BFF Jesse Tyler Ferguson, Gigi Hadid and even Queen Latifah and DJ Khaled nodding along with approval.

Swift never does anything without a strong purpose, and if the goal of this opening performance was to show the extremes of both the album and her talent — by going from day-glo, socially-themed spectacle to solo intimacy in the space of a six-minute medley during an awards show — she nailed that too.